The Sea Doc Society recognized the Crab Team for their use of science to improve the health of the Salish Sea, and particularly for their work in preventing the European green crab from becoming a settled invasive species. The European green crab is a damaging invasive species that has wreaked havoc on ecosystems around the world, and recently found their way into the Salish Sea. When introduced into ecosystems outside of its native range, the green crab’s impact has been both ecological and economic. Not only do they disturb native habitat, displace resident species and alter natural food webs, but they have decimated shellfish industries, as well.

Emily Grason, Program Manager for WSG Crab Team, says, “This species is probably the most notorious and damaging marine invasive on the planet, and it’s unfortunately not just on our doorstep here in the Salish Sea, but it’s wandered into our foyer as well. Our goal is to keep it from overstaying its welcome.”

The WSG Crab Team was launched in 2015 at the urging of the Washington Department of Fish and Wildlife. The team created a volunteer-based early detection and monitoring program that included outreach to the public and provided technical expertise to state, federal and tribal resource managers. This was the first pre-emptive monitoring program in the U.S. for this species. 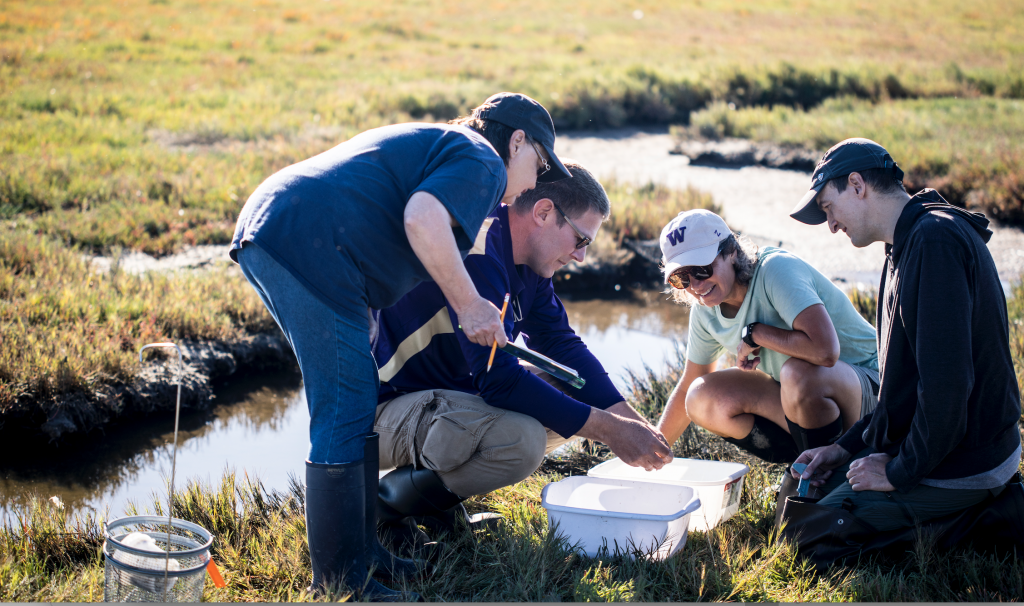 Among their first action steps, the team developed a scientifically based map of “at risk” sites that allowed prioritized monitoring of susceptible pocket estuaries and lagoons. They also developed a robust protocol for community volunteers to help monitor for new sites of invasion. And, based on oceanographic and genetic studies coordinated by Washington Sea Grant and conducted in collaboration with researchers at UW Oceanography and Woods Hole Oceanographic Institution, the Crab Team supported development of the Salish Sea-wide transboundary action plan for detecting and responding to the green crab invasion.

“We’re trying to learn as much as possible from this crab, even as we work to prevent it from invading, and feed what we learn right back into management,” says Grason. “The science we’re doing is not merely a bonus, it’s central to our ability to protect Salish Sea shorelines from European green crab.”

SeaDoc awarded the prize in honor of the late Stephanie Wagner, who loved the Salish Sea and left a legacy gift to ensure its protection. The award comes with a $2,000, no-strings-attached cash prize that is typically awarded in a ceremony at the Salish Sea Ecosystem Conference, which was held virtually this year due to the coronavirus pandemic.

Joe Gaydos, SeaDoc Society Science Director, said, “In a day and age when many people doubt scientific results or don’t understand the value of science, this prize reminds us that science places a foundational role in recovering ecosystems like the Salish Sea.”