What Does the Invasion at Lummi Mean for the Salish Sea?

The recent report by the Lummi Nation of more than 70,000 European green crabs captured this year has many wondering what this could mean for efforts to prevent green crabs from establishing in the Salish Sea. This number certainly indicates that the population of green crabs within the sea pond on the Lummi Reservation has grown exponentially since their first detection in 2019 (Mueller and Jefferson, 2019), and currently represents the largest population along inland Washington shorelines. The disaster declaration made by the Lummi Indian Business Council, highlights both the threat to tribal resources, and the need for increased control measures to effectively protect both the reservation, as well as the region, from accelerated spread and impacts of the invasion. 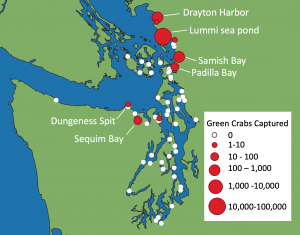 Map of total European green crab captures along inland Washington shorelines by site during 2021. White circles indicate sites where no green crabs were trapped. Red circles, sites with green crabs. are scaled – logarithmically for visibility – by total number of crabs captured in 2021. Note that the trapping effort was highly variable across these sites, ranging from 36 – thousands of trap sets, so this information is not a metric of population size. (click to enlarge)

Population growth has occurred exceptionally fast at the sea pond compared to any other site in the Salish Sea, where the trends are much different. This year, collective trapping efforts, including monitoring, exploratory, and removal trapping efforts managed by WSG, Washington Department of Fish and Wildlife (WDFW), and other partners, detected no major range expansions of green crabs. That is, the only places green crabs were captured were generally sites and water bodies with a known presence of European green crab in previous years, primarily sites along the Strait of Juan de Fuca and in Whatcom and Skagit counties. Additionally, capture rates, which are a proxy for population size, remained quite low across managed sites, and even dropped significantly at Drayton Harbor, near Blaine. More details on the status at other sites can be found below. This is good news, and evidence that trapping, with some help from nature, can be effective at controlling small localized populations in most locations.

This raises the question of why the situation is so different within the Lummi sea pond. This 50-year-old 750-acre artificial lagoon supports a salmon and a shellfish hatchery, and unfortunately now, a rapidly growing green crab population. The expansive shallow waters have only minimal connectivity to the tides that ebb and flow across the flats just outside the walls of the sea pond. This means tidal fluctuations are dampened, and the water temperatures can reach greater extremes than open water conditions. These features make the sea pond less hospitable to potential green crab predators, like large cancrid crabs and fishes that might eat juvenile green crabs, than surrounding shorelines. In addition, the reduced flow of ocean water into and out of the sea pond traps larvae produced by crabs living there in high densities, meaning more larvae survive and are retained in these favorable conditions until they reach settlement size. By contrast, most larvae that are released in tidal flats or marshes wash out of the habitat, and many die before reaching settlement size. Those that do settle are more likely to face predators and be consumed as juveniles than young crabs within the sea pond. These factors together make the sea pond an ideal “incubator” for green crabs. 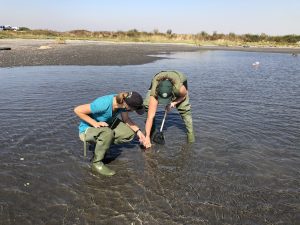 So far, the sea pond is the only site that has appeared to function this way within inland Washington waters. Although water exchange is reduced compared to surrounding tideflats, the sea pond is not cut off altogether, and an additional concern is that larvae produced within the sea pond could leak out and seed green crab expansion to neighboring shores. It will take time to understand whether or how the population in the sea pond influences other sites, and we will continue to collect and analyze observations, genetic material, and oceanographic modeling predictions that will help us interpret such patterns.

Scaling Up Response at Lummi

In the meantime, because green crabs won’t wait for these results, the Lummi Natural Resources (LNR) department has also rapidly grown its response efforts over the past two years. Trapping in 2020, which included two collaborative trapping efforts with partners from WDFW and WSG, in late summer, removed more than 2,000 crabs from the sea pond. Then, this August, young-of-the-year crabs started to grow to a size where they were entering traps, and the average catch rates jumped to almost 300 green crabs per 100 trap sets. LNR trappers, with WDFW personnel support when available, captured nearly 6,000 green crabs that month, outstripping the capacity of gear and personnel to keep up and dispose of crabs. 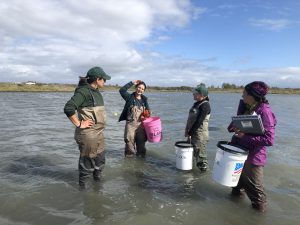 To rapidly increase boots in the mud, and traps in the water, LNR partnered with staff from the WDFW, WSG, and Northwest Straits Commission (NWSC), tripling trapping effort over the remainder of the summer and fall. One benefit of the lack of tidal fluctuation in the sea pond is that the timing of trapping is not tide dependent, as it is in open water tideflats. This allowed nearly full time, weekly trapping as well as use of an additional gear type, shrimp traps, which work well for green crabs in locations where they can remain under water all the time. At the peak, trappers were able to work 500 traps at one time in the sea pond, pull 1,200 trap sets over the course of a single week, and set traps in parts of the sea pond that hadn’t previously been explored. For reference, this is more traps than most sites see in an entire year. These new techniques unfortunately revealed that the problem was much greater than originally thought. In September and October alone, more than 60,000 green crabs were trapped by field staff in what has become one of the largest collaborative trapping efforts of its kind along the West Coast. Even accounting for this large scale of effort, capture rates increased to peak at about 900 green crabs per 100 trap nights as of October.

Tribal leadership from the Lummi Nation are extremely concerned about the number of green crabs on reservation tidelands and are committed to coordinating an appropriate response with Tribal, State and Federal partners. An exponential increase in trapping and removal efforts is essential, but the severity of green crab population growth will require a more comprehensive strategy to adequately reduce and contain crabs in the Lummi sea pond, and to limit its spread into Lummi Bay or neighboring areas of the Salish Sea.

In parallel, ongoing monitoring and removal trapping at other locations must also continue, in order to prevent currently small populations from reaching a threshold at which their numbers would increase rapidly to an unmanageable level. Trapping at sites like Dungeness Spit and Drayton Harbor have offered promising early results that, with a little help from nature, intensive management can effectively protect shorelines. That is, early and intensive intervention trapping can prevent most sparks from starting wildfires. The unique environment of the Lummi sea pond will require not only more intensive efforts, but also different approaches to manage this unique site. Crab Team will continue to offer support for the tribe’s efforts throughout the planning process.

Below are additional summaries from sites outside the sea pond across the Salish Sea. In general, capture rates remained very low, and none of the totals approached the magnitude of removal on the Lummi reservation. 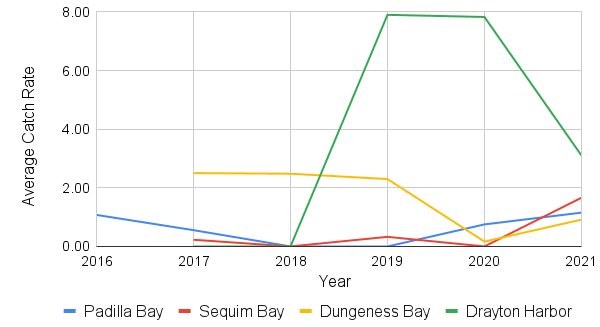 Average annual capture rate (in crabs per 100 trap sets) at four intensively-trapped sites within the Salish Sea. (click to enlarge)

Sites with green crab along the Strait saw a slight uptick in capture rates this year, relative to 2020. This is possibly related to increased populations of green crab in coastal estuaries of Oregon and Washington, which may be releasing more larvae that get swept along the southern shore of the strait.

Beyond management of the sea pond on the Lummi reservation, WDFW and the Northwest Straits Commission (NWSC) continued removal trapping at Drayton Harbor, and also kept an eye on other locations in the county.

With a small number of green crabs found in Padilla Bay occasionally since 2016, and in Samish Bay since early 2019, the two sites have been increasingly trapped.