Protocol in Focus: Is it a molt or a dead crab? 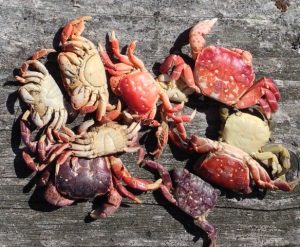 The molt hunt is one of the three core Crab Team protocols and complements the trapping survey by searching for the exoskeletons shed by crustaceans (i.e., molts). This provides evidence of crustaceans that may not come to our traps, including green crabs and offers insight into growth patterns of crustaceans that live near the monitoring site. Frankly, it’s also kind of fun! We think of it as an Easter egg hunt, where monitors race against the clock and their teammates to collect as many molts as possible. While it’s less charming–and thankfully less common–monitors sometimes also find dead crabs washed up on the shore as a part of their survey. This raises the question: how do we tell the difference between molts and dead crabs, and really, does it even matter?

Though finding either a dead crab or a molt from a live one indicates that species was recently nearby, each of the two specimen types might tell us a different story about what’s going on for the populations.

Because molts are shed as crustaceans – and all arthropods more broadly – grow, we can look at where and when crustaceans are growing by looking at how the numbers of molts change over sites and seasons.  As an indicator or growth, finding lots of molts is presumably an indication that life is good at those sites for those species, at least during those months. At Crab Team sites, different species appear to follow different patterns of seasonal growth. 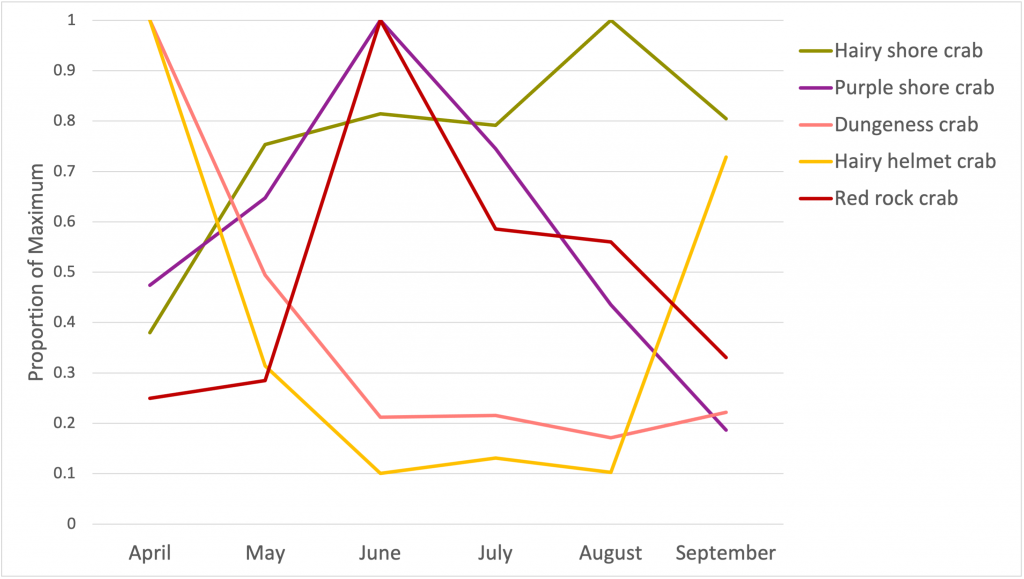 Seasonality of molts in of top five most common species found during the Crab Team molt search. Because the numbers of molts vary so greatly depending on the species, these numbers have been standardized to compared the monthly molt detection rate relative to maximum for that species. Data from 2019. Click to enlarge

By contrast, however, dead crabs tell us a different story. One of the more common finds during the molt search is a dead cancrid (e.g., Dungeness, graceful or rock crab). We don’t catch many of these larger crabs at our shallow muddy sites, so why do we find relatively more dead ones during the molt hunt than shore crabs? Well in many cases, we think that predators, like gulls or otters, actually like to catch these crabs nearby, often just over the berm on the open water side of the shoreline from our lagoons and marshes. And they bring them into the protected sites to chow down. But we do also find intact crabs that appear to just have…died. Typically the few we get like this are native shore crabs. It’s possible that these crabs just got caught in the wrong place and suffered too much heat or dried out on a long summer low tide. We haven’t seen one yet, but if we did see a large “wreck” of dead crabs, that could indicate a major stressor, like pollution or a toxic algal bloom.

It is not hard to mistake a molted crab shell for a dead animal, and we sometimes get reports of “die-offs” that are actually molting events. However, Crab Team monitors look at hundreds or thousands of molts over the season, and get very good at telling the difference.

First, it’s really helpful to have a general idea of how crabs molt. Crabs exit their old shell by backing out through a gap between the carapace and the first abdominal segment. The top and bottom of the carapace split apart along “the molt line,” which you can sometimes see if you look at the underside of a crab. When the shell pops open at the back, often the front remains slightly connected via a thin membrane, meaning the shell has a “hinge” near the eyes. The animal leaving the old shell takes all its tissues, muscles, and internal organs with it. But, the old crab exoskeleton also includes the thin shell covering to the gills, which is left behind in the molt. If this description doesn’t do it for you, check out some great videos showing the process in time lapse.

Keep this molting process in mind as you take a close look at a specimen you find on the beach, and try to answer the following questions: 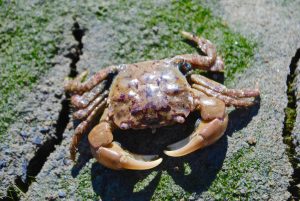 Does this look like a molt or a dead crab? Though the shell is still dark in color, other clues reveal that it is indeed a molt. Photo courtesy of Kelly Martin.

Though we provide all of these tips and tricks for distinguishing dead crabs from molts, there are times when there’s just not enough information left from the animal. Notwithstanding our joke about CSI: Crab Team, we suggest monitors record obviously dead crabs as dead, but if it’s too hard to tell, go ahead and assume it’s a molt.

As the weather warms, crab growth rates speed up, and so in the coming months, you’ll notice more crustacean specimens dotting the wrack line on your beach. Now, with your expert crab forensic skills, you’ll be sure to impress your friends and family on your next trip to the beach with your apparently uncanny ability to discern the fate of the crab that left it!