Protocol in Focus: How do we steward Crab Team sites?

In addition to creating a scientifically robust sampling scheme, and one that is sensitive to finding green crab when they are rare, Crab Team also put a great deal of thought and guidance into the protocol with the goal of being good stewards of Washington’s shorelines. Even though our goal is to detect green crab as they first arrive and help avoid ecological damage, it is certainly true that the act of sampling itself can be a disturbance to a site. Repeated visits to muddy habitats can trample vegetation over time. Being caught in a trap can be stressful for the native crabs and fish. Multiply this by 56 sites, six times per year over successive years, and the cumulative effects, if we weren’t careful, could be substantial, and even reduce the resilience of sites to green crabs.

We wanted to highlight those best practices for sampling that aim to protect the habitat from being impacted by the work we do.

Taking care of the animals

We set traps targeting green crabs, but the vast majority of what we catch is native crabs, shrimps, fishes, and other assorted critters. Even though everything in our traps is released as soon as it is counted (except green crabs, of course!), trapping can still be stressful for these animals – imagine being a sculpin and sharing your trap with several hundred beefed up male hairy shore crabs who have been promised a fish dinner. So that we can release animals in the best condition possible, and they can continue to contribute to the rich and productive pocket estuaries of the Salish Sea: 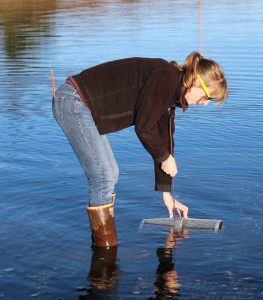 Emily demonstrates setting traps in places so they are always underwater, even on the lowest low tides. Photo: J. Adams

Many of the Crab Team monitoring sites are beautiful salt marshes and pocket estuaries, and some are in public parks with visitors who appreciate the natural setting. The sites have cultural and economic value that could be degraded by “too much love,” and provide important ecosystem services such as erosion control and foraging ground. To preserve the habitat:

Many Crab Team volunteers engage in other beach-y activities, and it’s important to reduce the chance that plants and animals could be moved from place to place. While it’s unlikely anyone could accidentally transport a green crab in the tread of their boots, other organisms are ready stowaways, such as the seeds of invasive Spartina, small mud snails, etc. We’re not as worried about accidentally moving the animals we can see, we’re more worried about the ones we can’t see. 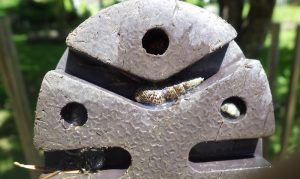 A stowaway invasive Asian mud snail (Batillaria attramentaria) in a boot tread. These snails are only spread by humans, so make sure you don’t offer them a lift!

You are likely already doing most, if not all, of these things, and we appreciate all the extra extra things you do – like picking up trash – to be great stewards of your sites! Following all of these tips helps ensure that we can continue to monitor our Crab Team sites in the years to come.