(Photo: A male, 38.5mm European green crab, one of the 17 captured at Drayton Harbor last month.) 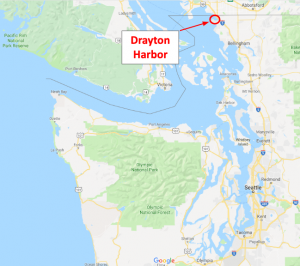 Blaine, WA — As part of an early-detection partnership, the Washington Department of Fish and Wildlife (WDFW) and the Washington Sea Grant (WSG) Crab Team found evidence of European green crabs (Carcinus maenas) in Drayton Harbor during regular monitoring, and then trapped 17 green crabs during a two-day rapid response in late September. This is the highest number of green crabs trapped in such a short period of time from any one area along Washington’s inland shoreline.

“Finding this many invasive green crabs so quickly in one area raises a serious concern that there may be an established and reproducing population in Drayton Harbor,” said Allen Pleus, WDFW’s aquatic invasive species manager. “We are working with our partners at Washington Sea Grant to do additional trapping in the area and will work with local governments, tribes, and other partners to plan an appropriate response.”

European green crabs are a globally damaging invasive species that pose a threat to Washington’s economic, environmental, and cultural resources. Potential impacts include the destruction of eelgrass beds and estuarine marsh habitats, threats to the harvest of wild shellfish and the shellfish aquaculture industry, the Dungeness crab fishery, salmon recovery, and a complex array of ecological impacts to food webs, which could negatively impact human uses and cultural resources of the Salish Sea.

“Managing aquatic invasive species like the European green crab is similar to preventing wildfires,” said Emily Grason, marine ecologist and Crab Team program manager at Washington Sea Grant. “We keep a sharp lookout and respond quickly to small populations before they get too big to control. When even a single green crab is found, the first step is to quickly do more trapping to figure out the size and geographic extent of a potential population. Then we have more information to determine the best way to manage them.” 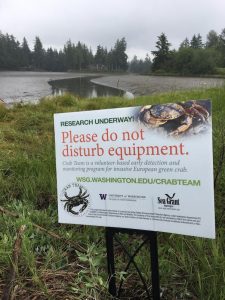 The European green crab first became established in the United States in the mid-1800s, arriving by sail or steamships via transatlantic trade routes to the Cape Cod region on the east coast. In the early 1900s, green crabs spread northwards, where they are believed to have contributed to the dramatic declines in the soft-shell clam industry. In 1989, they were discovered on the West Coast, in San Francisco Bay. WDFW first confirmed green crabs in Washington waters in 1998 in Willapa Bay and Grays Harbor.

As the prevention of green crab infestations requires widespread help, WDFW worked with the Canadian Department of Fisheries and Oceans, the Puget Sound Partnership, and Washington Sea Grant to develop the Salish Sea Transboundary Action Plan, which is available online at https://wdfw.wa.gov/publications/02045 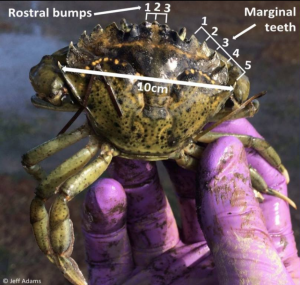 The identifying features of a European green crab. Photo by Jeff Adams. Click to enlarge.

WDFW encourages the public to keep a lookout for European green crabs when visiting the beach. People can familiarize themselves with how to identify the species and distinguish it from similar native species on Washington Sea Grant’s crab identification webpage.

If you find a live green crab or its shell in Washington, report it online as soon as possible. Take several pictures from different angles and distances to help confirm the identification. It’s also helpful to include a coin or other object to help show its size.

It is illegal to possess a live green crab in Washington, so make sure to leave the crab where you found it. This may sound counter-intuitive, but this law is designed to protect native crabs from cases of mistaken identity, which is very common. If you find a dead crab or an empty shell, however, you can collect and keep it to help in identification.

More information on aquatic invasive species in Washington is available on WDFW’s website.

The Washington Department of Fish and Wildlife is the state agency tasked with preserving, protecting and perpetuating fish, wildlife and ecosystems, while providing sustainable fishing, hunting, and other recreation opportunities.

Based at the University of Washington, Washington Sea Grant provides statewide marine research, outreach and education services. The National Sea Grant College Program is part of the National Oceanic and Atmospheric Administration, U.S. Department of Commerce. Learn more at www.wsg.washington.edu.