Sequim, WA — A new population of invasive European green crab has been found at Dungeness Spit, near Sequim, Washington, rekindling concern over the potential for damage to local marine life and shorelines.

Staff and volunteers from U.S. Fish and Wildlife Service (USFWS), which manages Dungeness Spit National Wildlife Refuge (NWR), captured a total of 13 European green crab over the past two weeks as part of Washington Sea Grant’s (WSG) Crab Team early detection program. These numbers indicate that the invasive crabs are more abundant at Dungeness Spit than at the two other known locations in Washington’s inland waters.

“Directly addressing the threat of green crab requires both early detection and rapid response, with the goal of finding isolated populations when they are still rare and reducing or eliminating them,” said Allen Pleus, the Washington Department of Fish and Wildlife’s Aquatic Invasive Species Unit Lead.

The first discovery of this globally damaging invasive crab in Washington’s Salish Sea was made by WSG Crab Team volunteers last August on San Juan Island, followed quickly by a detection at the Padilla Bay National Estuarine Research Reserve (PBNERR), near Mt. Vernon. In both cases, follow-up rapid response trapping and removal by a joint WSG, WDFW, and PBNERR team showed that the crabs were present, but still very rare in those locations.

“This is a very different situation,” says Crab Team Program Coordinator, Emily Grason. “In Padilla Bay, the crabs we found were too far apart to find and mate with each other, but at Dungeness Spit, multiple crabs are being found at the same site, over successive days of trapping. This indicates a situation where the population could grow very quickly, if we don’t intervene.”

Dungeness Spit NWR, in coordination with WDFW and the WSG Crab Team staff, immediately responded to the initial detection with a rapid response trapping effort and are currently working on a plan with local stakeholders for ongoing response and removal efforts for the area. 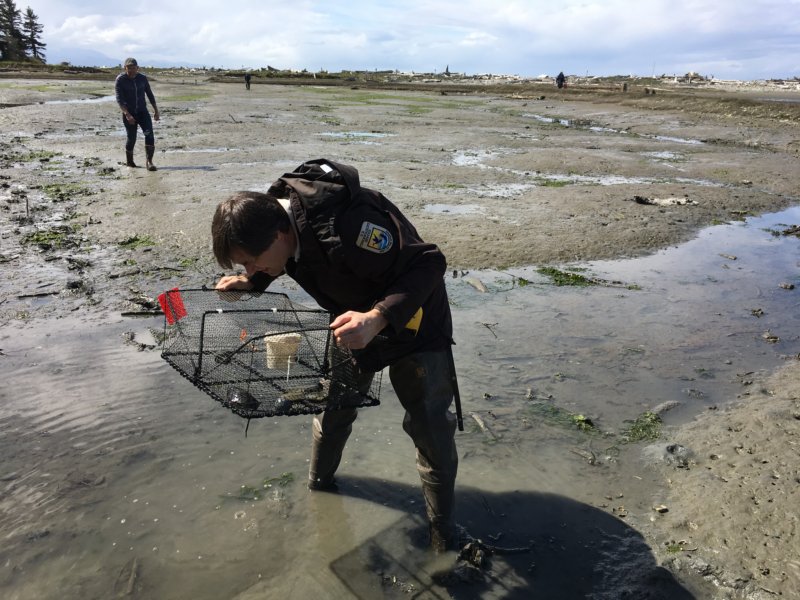 European green crab is one of the most globally-successful invasive species, and established populations are problems in Australia, South Africa, and the East Coast of the U.S. In places where the crab has become abundant, it has been blamed for damaging shellfish harvests and decimating sea grass beds. Research on the U.S. West Coast has indicated that native organisms such as shore crabs, young Dungeness crabs, as well as shellfish, could be harmed by invasive green crab. The nearest known population of green crab to Washington state is just across the Strait of Juan de Fuca, west of Victoria, British Columbia, in Sooke Inlet.

Concerned citizens can help by keeping a lookout for European green crab when visiting salt marshes and pocket estuaries. For information on how to recognize the crab, and likely places to look, visit the Crab Team website: wsg.washington.edu/crabteam. Anyone who thinks they have found a green crab should leave the crab in place and email photographs to the WSG Crab Team at crabteam@uw.edu.