In the Nick of time? An early detection and rapid assessment in Hood Canal

The amazing volunteers who make up Washington Sea Grant’s Crab Team have done it again, detecting a basketful of green crabs before they became a truckload. Part of what makes this event particularly significant is that it’s in Hood Canal, a basin of the Salish Sea where green crabs had not previously been detected.

From Detection to Response 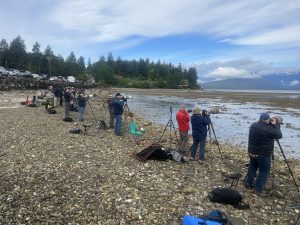 Photographers and birders line the beach at Big Beef estuary this time of year to watch the bald eagles that forage here at low tide.

During their regular monthly monitoring in May, the team at Nick’s Lagoon near Seabeck caught a single male green crab with a 52mm (about 2”) wide carapace or back shell, and the collaborative management efforts jumped immediately into action. From the mud, the crab started its final journey to genetics research immortality. WSG and Washington Department of Fish and Wildlife staff (coincidentally in the field together at another location) immediately pulled up the habitat suitability maps to identify the nearby locations where larvae might have also been likely to successfully settle and grow. Within days, local landowners at these potential trapping sites, including Kitsap County Parks, the Hood Canal Salmon Enhancement Group, Great Peninsula Conservancy, Seabeck Conference Center and the Hood Canal Oyster Company all became amazing partners in granting access and making connections so a thorough rapid assessment could happen, well, rapidly. 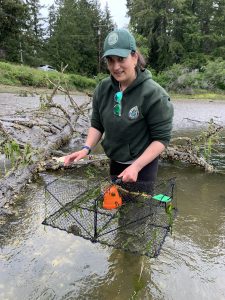 WDFW AIS Decontamination Lead Lennah Mohar pulls a Fukui trap with a green crab in it during the Seabeck assessment.

By the end of the week following the Nick’s Lagoon detection, WDFW crews had braved strong winds, high waves, deep mud, flooded boots and avid eagle photographers to get a more comprehensive picture of the scope of green crab presence in and around Seabeck. They even followed up with additional trapping the first week of June, and assessment efforts are likely to continue in some form for suitable habitats throughout Hood Canal. In total, as of this writing, 398 traps had been set across 10 sites over several nights, capturing a total of 13 additional green crabs.

In some ways, it is good news that, so far, nearly all of the crabs have come from Nick’s Lagoon, potentially allowing for more focused control efforts. One individual was found at each of two nearby sites, Misery Point Lagoon and Big Beef estuary. The crabs ranged in size from 34 to 70mm (1.3 and 2.55”) wide, which means the first crabs were floating around as larvae in 2020, while others were hatched in 2021. All the green crabs were brought back to UW to join the crab from the initial detection as participants in high-resolution genetic analysis that can shed light on their geographic origins. Concurrent with the trapping efforts, WDFW also collected water samples as a pilot effort to correlate eDNA information with trapping data. Because this is a new detection area, it’s important to get as much information in as short a time as possible to inform the next steps in management. 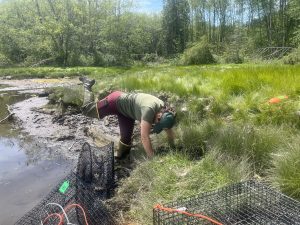 The lead agency for green crab management in the state is WDFW, WSG supports efforts to manage green crabs through the Crab Team early detection network and by providing scientific and technical advising to WDFW and trapping partners. The Seabeck effort certainly demonstrates how smoothly the partnership can work–this was the fastest turnaround from initial crab detection to rapid response trapping WDFW and WSG have achieved to date. WDFW will evaluate the results of this assessment effort and confer with Tribal co-managers and other partners to determine next steps with respect to Seabeck and Hood Canal more broadly.

Meanwhile, the Nick’s Lagoon Squadron (as the volunteers have self-identified) and other Crab Team monitors around Hood Canal will continue their monthly sampling both as the early alarm for green crab and to understand status and trends of important pocket estuary, lagoon and tide flat habitats. The Crab Team site network and protocols are designed to systematically track changes in green crab and everything else we see in traps over space and time. We can then better assess the status and trends of populations of both native and nonnative species, as well as impacts and ecological interactions of green crabs, restoration or other disturbances (e.g. extreme weather events). 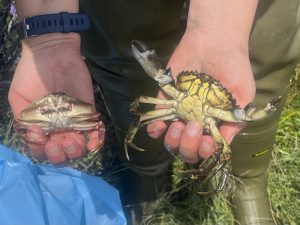 Green crabs (right) were captured in traps alongside the residents of some of the estuary habitats, like this graceful crab (Metacarcinus (Cancer) magister, left).

To put these 13 green crabs in the context of what else lives in these habitats, alongside them in traps were thousands of individuals of several different species, including at least 7 different species of crabs, four species of sculpins, five other species of fish and snails both native and not. Some notables to leave you with include the padded sculpin, which we have only recently begun to find in traps during regular monitoring; prickly sculpin, which tend to prefer the fresher water side of our estuaries; and a graceful cancer crab that had the misfortune to share a trap with a large green crab.