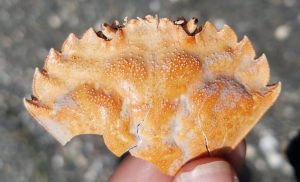 Interestingly, the crabs found at most monitoring sites are adult sized — at least 39 mm, with some up to 85 mm carapace width. This suggests that the green crabs have been around for at least two or three years, and the warmer water temperatures in 2015 and 2016 may have helped the crab larvae invade Salish Sea waters. What this means for their continued persistence remains to be seen, but it underscores the need for sustained efforts to monitor and detect green crabs at sites around the Salish Sea, which will help to guide management strategies.

For more information about the monitoring efforts, or to learn how to identify green crabs, visit wsg.washington.edu/crabteam.