The first half of the 2018 WSG Crab Team monitoring season is coming to a close, and with that comes a status update on European green crab in Washington’s Salish Sea. Since April, live green crab or molts have been detected at five sites, two of which are new detection sites: 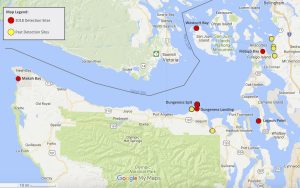 Map of 2018 and past sites where European green crab have been detected. Click to enlarge.

Though outside the Salish Sea, ongoing trapping efforts in Makah Bay have captured 510 green crab so far this year! Crab Team staff will be traveling to the Makah Reservation in mid-July to assist with the Tribe’s trapping and removal efforts. 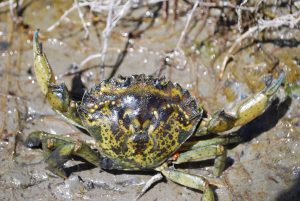 One of the two European green crab captured at Westcott Bay, on San Juan Island, this week. Photo: Kelly Martin

What do we make of all this? Well, size matters, and with green crab we can estimate their age based on how large they are. Some of the crabs being found at Makah Bay are small, slightly over an inch across the back shell. These are also the sites where the largest numbers of green crab are being captured. Crabs of this size likely settled during late summer of 2017, but we can’t tell if these crabs were the result of reproduction occurring at these sites, or of larvae getting washed in from another seeding population on the coast. At all the other sites, crabs are adult sized, at least 39mm and up to 85mm! These crabs are two or three years old at least, aligning with the observation that, based on warm temperatures, 2015 and 2016 were especially good years for green crab to get moved around as larvae from established populations on the coast of British Columbia or the US.

We perhaps should not be surprised to find green crab in some of these locations, particularly the places where green crab have been spotted in previous years. But the fact that we are seeing green crab at new sites is certainly concerning, as is their persistence at places like Dungeness Spit. Because green crab don’t travel very far on a daily basis, the crabs that are being trapped at these sites this year have likely been there for a year or more, but are only now being captured despite previous trapping. This underscores a challenge of green crab management: sustained effort at a site is critical not only to detecting green crab in the first place, but also to long term management success. It is important to do as much as we can now to avoid allowing populations to increase dramatically. Thankfully, even as our concern about the spread of this globally invasive crab grows, so does the community of agencies, tribes, volunteers and beachgoers that are trained, on the lookout, and working hard to protect Washington’s shorelines from European green crab. Thank you to all of you out there in the mud trapping or searching for green crab!

Learn how to help look for invasive European green crab, and what to do if you think you’ve found one.