How to Get Your “Eyes on the Beach” Like a Pro

The recent captures of invasive European green crabs, the first documented in Washington’s Salish Sea, have garnered a lot of recent media attention. We are thrilled that local residents are eager to help protect shorelines from this global invasive species and have set about looking for European green crabs as they walk the beach, paddle the waters, and pull up crab pots. Given 2,500 miles or so of shoreline, this network of “Eyes on the Beach” is critical to the early detection of crabs, before they establish reproducing populations that would be difficult, if not impossible, to eradicate. Crab Team’s four staff members can’t be everywhere, and even 100 volunteers can’t trap all the possible sites! 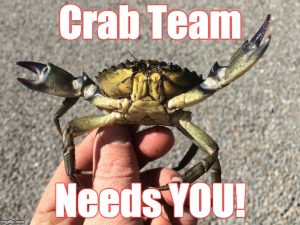 But these deserve a little bit more detail, particularly about why we don’t ask people to remove crabs from the habitat where they found them. Below you’ll find some answers to some commonly asked-questions about green crab sightings.

Question: Why should I leave the crab in place? 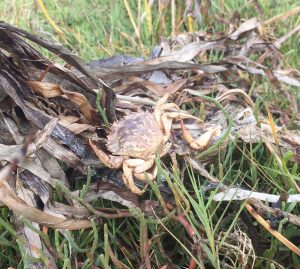 Molts, like this one found in Willapa Bay, often wash up in beach wrack, and can be safely collected as evidence of nearby European green crabs. (Photo: Sean McDonald)

Answer: It is illegal in Washington to possess a European green crab without a specific permit. In fact, the only crabs that are legal to collect without a scientific collection permit are Dungeness and red rock crabs, and those two species can only be taken with the appropriate recreational harvest permits, during the specified season and within size and number limits. This prohibition on European green crabs was put in place to reduce the potential for intentional or unintentional spread of the crabs, or of possible diseases or pathogens they might carry.

However, molts – the shed skins/shells of crabs that can be found on the beach – can be safely and legally collected. Please collect molts you find and send pictures to us: crabteam@uw.edu.

Q: Ok, but then why shouldn’t I just kill the crab on site? Isn’t that better than letting it go free? 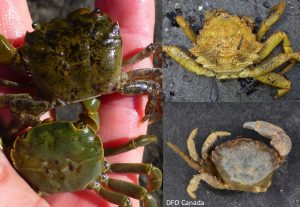 A: It’s best to first let an expert make the call of whether it is truly an invasive crab. We have many small native crabs that are green and are easily confused with European green crabs unless you have a trained eye. In addition, green crabs can actually turn quite red as they get older. So far, 100% of the photo reports we’ve received of possible sightings have been of native species (thankfully!). Many concerned beachgoers, looking closely for invasive crabs, spot a native crab that might not be familiar, because it is relatively uncommon. If those crabs were all killed on site, it could result in the unnecessary death of a large number of native crabs.

It might be hard to let a crab go when you are concerned it could be invasive, but keep in mind that WDFW will respond to any confirmed sightings quickly, and the best thing you can do is to get the information to us as soon as possible.

Q: Are they edible? Why don’t we just eat them and solve the problem that way?

Though edible, and fished commercially in their native range, European green crabs aren’t any bigger than your fist. Spoiled as we are with Dungeness crabs, small, lean green crabs don’t make the most appealing meal. More importantly, there are very, very few of them in the Salish Sea right now, and the goal is to keep the populations from ever getting large enough to harvest and to prevent the ecological and economic impacts that could come with that many invasive crabs.

There are examples of species that have gotten out of control and for which harvest is now allowed. Crayfish is one. Harvest of invasive crayfish is now allowed, but harvesters must be able to tell the difference between native and invasive crayfish and must kill the invasive crayfish when they catch them (before leaving the water body where they were collected). Again, the goal of an early detection program like WSG’s Crab Team is to prevent getting to that point and to avoid the impacts that the species can have on our native shellfish, other species, and shoreline habitats.

We hope this clears up some of the questions you might have about spotting invasive European green crabs on Washington shores. Keep on walking those shorelines!