How the Elwha Dam Removals Changed the River’s Mouth

For decades, resource managers agreed that removing the two dams on the Elwha River would be a big win for the watershed as a whole and, in particular, for its anadromous trout and salmon. The dams sat on the river for more than 100 years, trapping approximately 30 million tonnes of sediment behind their concrete walls. As the dams were removed between 2012 and 2014, much of this sediment was released downstream — and scientists had little comparisons to draw from to understand what this sediment load would do to the marine ecosystem at the mouth of the river.

In the time since the dams’ removal, scientists from University of Washington-based Washington Sea Grant, the U.S. Geological Survey, Washington Department of Natural Resources, the Lower Elwha Klallam Tribe, the Environmental Protection Agency and the UW have sifted through eight years of data collected before and after the dam removal projects to analyze the impacts the resulting sediment load has had on the nearshore ecosystems near the mouth of the Elwha River. Their findings were published in the journal PLOS ONE in December 2017. 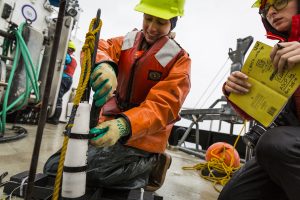 UW students Hannah Glover and Lauren Kowalski attach pressure sensors to a platform on board the R/V Barnes. Mark Stone/University of Washington

“The main impetus for the dam removal was the salmon reintroduction,” said study co-author Stephen Rubin, a USGS fishery biologist. “But it was also about a whole ecosystem restoration, all the way from above the dams to the strait.”

In the short-term, however, some hypothesized that the sediment influx to the nearby coastal marine ecosystem could negatively impact certain species. This study sought to monitor these potential impacts and the ecosystem’s progression as it adjusted to post-dam life.

They found that how organisms were affected depended on the type of sediment that was deposited in their habitat (for example, whether it was sand or mud) and the local turbidity (how murky suspended sediment had made the water). Still, some organisms were more resilient to the changes than others.

According to their results, the dam removal projects did not result in significant overall changes in the invertebrate or fish communities. Kelp, however, markedly decreased. Understandably so, since kelp relies on light for photosynthesis, and when more sediment is suspended in the water, there is less light available to them.

“We viewed this as an opportunity to find out what really happens to the nearshore environment after a dam is removed,” said co-author Ian Miller, coastal hazards specialist at Washington Sea Grant.

The researchers used SCUBA surveys and towed video transects to quantify the relative abundances of algae, invertebrate species and benthic fish living along the shore near the river, and then compared these findings to the patterns of sediment influx using data collected by the USGS and the UW School of Oceanography on substrate changes, and MODIS satellite imagery to track changes in the suspended sediment in the water column.