Partnering with Indigenous Communities to Anticipate and Adapt to Ocean Change

The productive ocean off Washington state’s Olympic Coast supports an abundant web of life including kelp forests, fish, shellfish, seabirds and marine mammals. The harvest and use of these treaty-protected marine resources have been central to the local tribes’ livelihoods, food security and cultural practices for thousands of years. But ocean acidification is changing the chemistry of these waters, putting many coastal species – and the human communities that depend upon them – under threat.

With a new $700,000 grant awarded from the NOAA Ocean Acidification Program, scientists from the University of Washington’s Applied Physics Laboratory, Washington Sea Grant and the Joint Institute for the Study of the Atmosphere and Ocean have teamed with federal and tribal partners to study the social and ecological vulnerabilities of Olympic Coast ocean acidification. The collaborative team hopes their work will enable Pacific Northwest decision makers to better anticipate, evaluate and manage the significant and unique risks that ocean change presents to tribal communities. 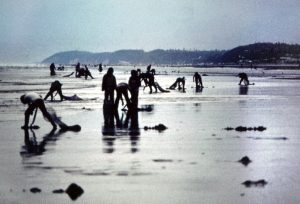 “The goal of this project is to marry two currently disparate data sets; ocean chemistry and biological data collected by natural scientists, and social science data that includes how people use the resources that may be impacted,” said Jan Newton, an oceanographer at the UW Applied Physics Laboratory.

Much of the first dataset already exists, as researchers from groups including UW, NOAA, the local tribes and the Olympic Coast National Marine Sanctuary have been measuring these biological and chemical trends for the past few decades. The group will synthesize these existing data sets, and use social science to help to hone in on the trends that will have the biggest impacts to the local people – including members of the Hoh, Makah and Quileute tribes, and the Quinault Indian Nation – whose ways of life are inextricably tied to the marine environment.

When it comes to understanding the effects of ocean acidification, “there’s a whole ocean of species scientists could focus on,” explained Melissa Poe, social scientist at Washington Sea Grant. “But we want to focus on the ones that are identified as the most important by the communities. What are the species and the food webs that the community depends upon for economic and cultural well-being – for their identity and traditional practices?” 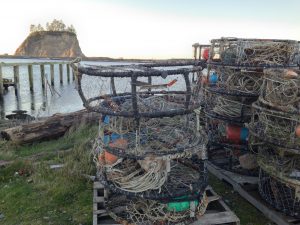 The collaborators will assess these and other questions related to the social dimensions of ocean acidification through community-participatory methods such as ethnographic interviews and workshops. Once they have synthesized the existing chemical and biological datasets and determined the roles of key marine species to the communities, the team will model future projections and estimate the impacts that ocean acidification will have on those species. Then, they will identify the aspects of community well-being that are most vulnerable to these ecological changes.

The researchers and tribal members will use the data to work together to find the next step: viable solutions that will help the community navigate these impacts. Ultimately, the group hopes to find community-driven strategies that can increase the ability of the tribes to prepare for and respond to how ocean acidification will affect them. They also hope the approach and techniques used in the project will be transferable to other communities who face similar challenges.

“The tie to the ocean is fundamental to who tribal people are – to their history, relationships, homelands – everything. The impacts to the ocean are felt deeply and in complex ways,” said Poe. “And so the solutions also need to be carefully matched and driven by the community needs and priorities.”