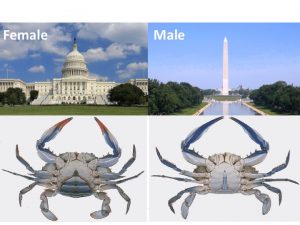 Growing up in Maryland, not too far from the Chesapeake Bay, crabs were a big part of local culture. As a schoolkid, I learned how to tell a male blue crab (Callinectes sapidus) from a female using a locally-relevant visual metaphor: Females have an abdomen shaped like the US Capitol building, and males have an abdomen shaped like the Washington Monument. Incidentally, this is also how I remember which monument was the Washington Monument – it’s the one shaped like the abdomen of a male crab.

WSG Crab Team volunteers are also entirely familiar with this difference, particularly in hairy shore crabs (Hemigrapsus oregonensis, or HEOR in Crab Team shorthand). Every crab that enters a trap has to be recorded by sex. To date, monitors have counted and determined the sex of more than 116,000 HEOR, so they have a pretty good mental image of what they are looking for and could easily sort crabs in their sleep. Once in a while however, they come across one that stumps them – like the crab in the header photo above. 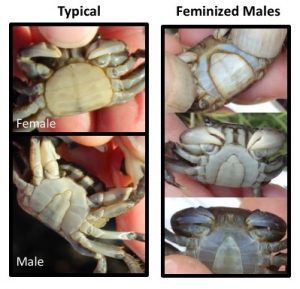 Typical mature female and male Hemigrapsus oregonensis abdominal shape, compared to several examples of males that have been feminized by the castrating parasite, Portunion conformis. Click to enlarge. All photos Jeff Adams.

Huh. Not quite a female and not quite a male. What exactly is going on here, and how do we record this?

Like so many good biological mysteries, this story turns out to be about parasites, and the culprit, in this case, is an isopod called Portunion conformis.

First, it helps to know a bit about why male and female crabs look different. The abdominal flap on females is wide because she uses it to brood her eggs. Under the flap, females have appendages called pleopods, onto which they attach their eggs. You might find a gravid, or “berried” female crab, with a mass of eggs held up against her underside. During brooding, the female takes special care of her eggs, waving her pleopods gently to make sure all the eggs get enough oxygen, cleaning off any debris (with setae), and protecting them with the abdominal flap. Females have evolved this wide flap presumably because a bigger flap can hold and protect more eggs.

Reproductive appendages of males, referred to as gonopods, are also protected by their abdomen which is – usually – much narrower than the females’. At least until Portunion conformis comes along. 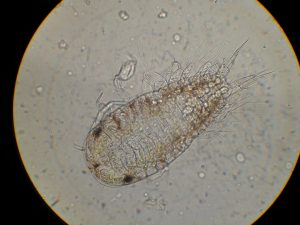 The larval form of Portunion conformis, called an epicaridium, the stage that swims into and infects the crabs. Photo: Chelsea Wood via Flickr

It is the female parasite that infects the crab, but both sexes of crab can be infected. The parasite finds a cozy spot in the crab’s body, but the crab produces a sac or sheath around the parasite, to wall it off. The parasite continues to grow in the sac, and by the time she’s bearing her own eggs, she’ll take up nearly all of the space inside the crab that the crab’s own reproductive organs would have otherwise taken up. This is because, in the process of growing, the parasite has castrated her crab host or hostess. While it’s not known for certain how this happens, the most likely scenario – based on related parasite systems – is that the parasite manipulates the hormones of the host crab, shrinking the ovaries in females, and the androgenic glands (which produce male hormones) in male crabs. This could cause the female crab to think she is brooding ripening eggs, and even to fill her blood with energy-rich lipids, providing a food source for the parasite. At this point, the crab host has essentially been turned into a parasite-making factory. 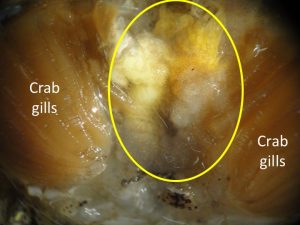 While the only sure-fire way to know if a crab has been infected with Portunion conformis is to dissect it, a fraction of infected crabs do show outward symptoms as well. Here we return to our confusing crab abdomen from earlier. The androgenic glands are what makes male crabs male, and Portunion shrinks those glands in male crab hosts. With the reduction of male hormones, the “state of male-ness” in the crab starts to fade externally. What we see on the outside of the crab is an abdomen that is wider than the typical male, but one that doesn’t extend all the way across the underside of the crab like a female’s would. But this is only for some male crabs; crabs can only change the shape of their shell and appendages when they molt, so this change in outward appearance happens incrementally in crabs, and is on a time delay. That is, a male crab might be infected, but won’t show any change in the abdomen shape until he molts. It’s trickier, but if you know just what to look for, and you time it right, you can also sometimes tell if females are infected by Portunion conformis.

Is recovery possible? Less is known about males, but females that successfully kill their parasites through an immune reaction can regain their ability to reproduce. But the infection experience comes with a cost: even after they kill their parasites, female crabs don’t seem to make as many eggs as a crab that has never been infected.

You might be feeling a sense of déjà vu if you also read about castrating barnacles that infect European green crab in a previous newsletter (if not, read now). Coopting reproduction is a clever parasite strategy. For invertebrates, reproduction is about quantity, rather than quality, and most invest a lot of energy in making eggs and sperm. For the parasite, stealing energy from host reproduction is smart, because it doesn’t kill the host. In addition to being poor etiquette, killing your host would be a bad idea for a parasite because it needs the host for energy to make its own offspring. By focusing only on reproductive parts of the host, parasites get the most bang for their buck.

Only a single Portunion is enough to fully infect and castrate a crab, but researchers have observed as many as 15 parasites in a single crab (read the research*). How many crabs are carrying this crustacean castrator? The tricky thing about this parasite, is that, without dissecting the crab, we can 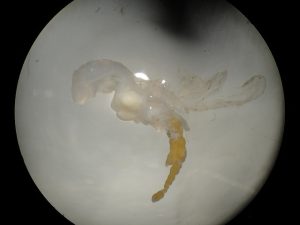 only sometimes tell whether a male has been infected. Just as it takes time (molt cycles) for the external features of the crab to change when it first becomes infected, it takes molt cycles to recover their previous shape as well. So we might find a crab that no longer carries a live parasite, but has not yet molted and so still has an feminized abdomen.

Prior research studies have recorded enormous variation in what percentage of the crab population is infected with Portunion conformis at any one time, from 1-91%, with no clear trends in infection prevalence over seasons, or over geographic space. Even two nearby sites can have dramatically different proportions of crab populations infected. And it’s not just HEOR! This parasite can infect both species of native Hemigrapsus we observe, but the purple shore crab (Hemigrapsus nudus, HENU) appears to be less frequently infected.

So all this parasite biology is, of course, extremely fascinating, but what do you actually do if you find a crab you aren’t sure of?

One tricky thing is that, while reproductively mature male and female crabs are very easy to tell apart, juvenile females can also have an abdomen that is something between a mature male and a mature female. The abdomen of the juvenile female is different from that of a feminized male, in that it is rounder, while the feminized male abdominal flap has very straight, often parallel long sides. Since this is only a potential confusion for juvenile, or small crabs, you really only have to take a close look at crabs that are smaller than 16mm or so.

If you come across a feminized male HEOR, treat and record it as a male, since it is genetically male and might recover from infection. If it is one of the first 10 males haphazardly pulled from the bin, record the carapace width in one of the 10 boxes, and include it in the total number of males for that trap. You can also include a note of how many of the males were feminized in the comments column for that trap on your trapping data sheet.

As always, if you aren’t sure what you are looking at, take good notes and send us lots of close up photos to ID for you. Please send us these photos and questions before you submit your data, so the data sheet you submit is complete.

Special thanks for all of the amazing detail in this article are due to Armand Kuris – THE guru on Portunion conformis – who graciously and patiently answered my many questions on this system. Thanks also to Chelsea Wood, who allowed us to use several of her excellent photos of infected crabs.

*We endeavor to connect you directly to the research that we use to learn about these questions. We apologize, however, that some journals restrict access to their content.