Protocol In Focus: Why do we estimate the roots of vegetation? 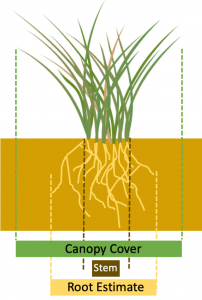 Cross section diagram showing three different ways we might characterize how much space plants take up in a quadrat: Canopy cover, stem area, rooted area. Note that estimated stem area would be smaller than the full extent of the stems because of the gaps between stems. Click to enlarge.

Vegetation is an important part of the pocket estuary habitats Crab Team monitors. There are several ways we might measure how much space plants take up in our quadrats. We could look at how much of the ground is covered by the shoots and leaves (canopy cover), or maybe what proportion of the space the stems take up at ground level (total stem area). A third option, which is used in the Crab Team transect protocol, estimates how much underground space the roots take up. At first thought, that might seem a bit like the oddest choice of the three, because it requires the most imagination and feels a bit, well, squishy. So why do we do it this way?

Each of the three ways of defining plant cover described above would tell us different things about the habitat. Canopy cover gives us some indication of how completely the ground is shaded, and maybe tells us something about how much plant biomass is available as food to organisms. Stem area and density can influence how much protective habitat is available to organisms living on the shoreline, and whether the sediment there is likely to be eroded or accreted. Both of these could be useful information to answer different ecological questions.

We have chosen to estimate the approximate area of the quadrat where the sediment is stabilized by plant roots, however, because this is one of the impacts we think green crab could have if they achieve high densities. Green crab are considered a “shore crab” because they live at relatively high intertidal elevations compared to larger crabs like Dungeness and rock crabs. When the tide is low, they burrow into the mud, or in banks for protection from drying out and from predators like birds. If green crab become very abundant the holes they make could reduce the stability of banks and shorelines, causing erosion of marshes.

“Birds eye” diagram showing three different ways vegetation cover would be assessed based on either canopy cover, total stem area, or estimated root area. Brown dots are cross sections of plant stems, and plant leaves are colored green in left diagram (removed for visualization in center and right diagram). Estimated root area is the Crab Team method, and is best accomplished by imagining a halo of about a 1” radius (yellow circles) around the stem of each plant, and summing the total area of haloes across the entire quadrat. Click to enlarge.

One study from Maine used a clever technique to document the underground impact of green crab. At three sites, they took sediment cores from the marsh; half of the cores were from parts of the site where green crab were less abundant (“reference sites”). Then they used a CT scanner to look at the composition of the cores, both visually, and in terms of sediment characteristics. Imagine the look on the CT 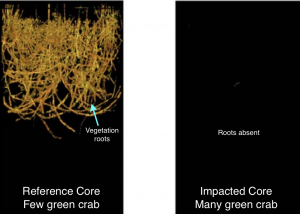 Figure adapted from Aman et al. 2016 of computed tomography (CT) scans of two sediment cores taken from the Damariscotta River estuary in Maine. The one on the left comes from a reference site where green crab density is low, and shows the extent of roots from marsh vegetation. The scan on the right comes from a site with high green crab density, where vegetation and roots are nearly absent. Click to enlarge.

technician’s face when a stinky mud tube was placed in their very fancy machine! Compared to the reference cores (few green crab), the sediment cores taken from impacted sites (lots of green crab) had very little root biomass, which correlated with weaker structural integrity. That is, it appears green crab can reduce the ability of plants to grow or survive in the marsh and stabilize the sediment, increasing the potential for erosion.

Our estimation of root area is an attempt to get at this effect, without completely tearing up our sites. We expect that we might see the proportion of the quadrat stabilized by rooted vegetation decline at sites where green crab become abundant. Ultimately, such a decline could lead to the collapse of banks.

One interesting question to consider is whether this effect, if it occurs, would be different from the impact that the burrowing of native hairy shore crabs. At some sites where native shore crabs are abundant, the holes they dig in the bank – for the same reasons as green crab – can be very dense. It is possible that the impact of green crab wouldn’t differ very much, and our marshes would be resilient to the impacts of the invader.

It’s true that, unless we were to rip apart the banks, assessing the area secured by vegetation roots involves a bit 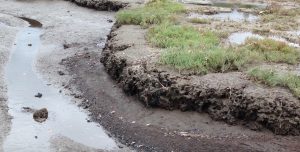 Shallow channel habitat of a pocket estuary in Discovery Bay. The vertical banks are pitted with holes which originated from burrows, likely made by native hairy shore crabs (Hemigrapsus oregonensis). Green crab burrowing may be similar to or different from this common habitat feature at Crab Team monitoring sites (Photo: E. Grason)

of imagination. It’s also true that this method doesn’t fully account for the fact that different types of plant have different shapes of roots, some have wider root “haloes” and some have narrower ones. That’s why we say we are estimating the area secured by roots rather than measuring it. The Crab Team approach is one of the areas in which we have to find a compromise between getting 100% perfect knowledge of the environment and being practical in our ecological sampling. One day, we will have a real-life tricorder, but until then, we estimate the best we can. Averaged over the estimates of several team members, and across multiple quadrats, this method works out to give us a general idea of the status of each site which can still tell us a great deal about change over time.