Protocol in Focus: What is “live epifauna”?

One strength of the Crab Team protocol is that it enables us to confidently compare findings among different sites, and track changes over time – even if different people are doing the sampling. With sampling on this scale, even the small steps can be important to what we learn from the data. The Protocol in Focus allows us to expand on these details, and offer an opportunity to see all the behind-the-scenes planning that goes into methodology.

One of the most challenging parts of creating a sampling program that spans a large geographic area is that we don’t always know what we will find at any particular site. These pocket estuaries are similar in many ways, but they are also small and isolated in a way that makes each one unique.

This is a particular conundrum in the shoreline transect survey, the goal of which is to paint a picture of what that site is actually like. We strive to get enough information so that, down the road, if green crabs do arrive at some sites, we can identify particular features associated with green crabs’ success and impacts. Do they prefer mud or sand? Do they like areas with more vegetation? Can we see changes in these features that might result from the arrival of the crabs? Just as importantly, knowing about these habitats will help us answer the same questions for native species we track. The temptation is to gather as much information as possible, because it would give us a high-resolution picture of the habitat, so we could really drill down into what specific features matter. But you can imagine that could easily require being at the site for days and days, sifting sediments to calculate grain size, measuring organic content, above-ground and below-ground biomass of vegetation…the list of possibilities goes on and on. An important goal is to balance the desire for detail with a healthy dose of pragmatism.

During our pilot year, the shoreline transect survey tracked wrack, rooted vegetation, and bare substrate. We tried to keep it simple. However, very quickly, in fact in our first week in the mud, we realized this was likely insufficient. Sean McDonald came back from visiting the site with Tom Vos and Finn Gatewood who monitored Deer Lagoon on Whidbey Island and said, “What do we do with barnacles?” 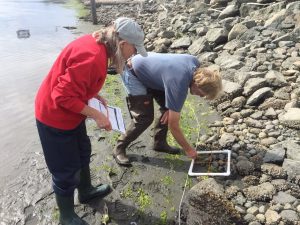 To give you an image, Deer Lagoon is lined on two sides by man-made dikes, armored on either side by large boulders called rip-rap. The shore is steep, and there is little to no rooted vegetation, so the bottom habitat boundary is at the foot of the riprap, a mix of sandy sediment and small to medium-sized cobbles as well as large boulders (sometimes trees, too!). We were so wrapped up in imagining all of the marshy habitats we were going to survey, we had conveniently forgotten that the hard surfaces of armored shoreline, even in low energy habitats, can offer a good place for barnacles to stick.

Our first reaction was, “Well, if they aren’t ‘rooted vegetation’ or ‘wrack’, barnacles count as ‘bare’.” We just didn’t expect this particular scenario to apply to many of our sites. But we realized we were missing an opportunity to observe the organisms that green crabs might like to eat. Not just barnacles, but mussels, snails, and limpets, too, live in places like Deer Lagoon, where small outcroppings of hard surfaces are oases for critters that can’t survive well on unstable, unprotected mud. These types of organisms are all on the green crab’s extensive menu, so we might expect that if green crabs arrive and become abundant, they could actually make a measurable dent in some of these populations. 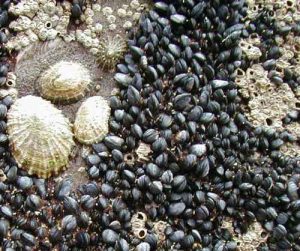 Limpets, mussels, and barnacles all count as epifauna

This year we added the category of “Live Epifauna” to Step 2 of the quadrat estimation – looking at what features are actually a part of the habitat (as opposed to the wrack estimation, which tells us about what is going on upland of the shoreline — terrestrial debris and trash — as well as deeper in the water — i.e. eelgrass and seaweed). We ask what percent of the space is taken up by live epifauna, which means animals living on or attached to the surface. This could be mussels, barnacles, snails, limpets, chitons; our rule of thumb is if it can’t move fast enough to leave the quadrat while you are observing it, it gets counted as live epifauna.

While we could increase the resolution of our habitat picture by dividing the category into each individual species, we lump them into “live epifauna” to give us a ballpark of how much food might be available for green crabs. And if green crabs arrive and we see the number drop, we might be able to directly attribute this to the invader. 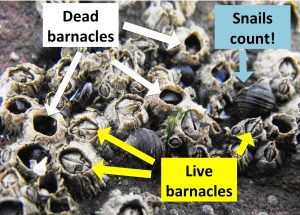 Why do we record only the live epifauna? High in the intertidal zone, marine animals like these often die from heat or desiccation and leave their shells behind. Those shells take up space, but aren’t a potential food source for green crabs, so they still count as “bare” habitat. It’s true that even shells of dead animals contribute to the ecology of the area by creating shelter and settlement surfaces, but we made the decision that knowing about living organisms was the more important question – again, trading detail for pragmatism.

How do you tell live epifauna from the remnants of dead epifauna? Admittedly, it’s not always easy with invertebrates to tell if they are dead. Dead barnacles are typically empty, because the plates protecting their opening (opercular plates) fall off as the tissue attaching them to the shell (also called the test) degrades. It sometimes take a while to lose the opercular plates after death, but to avoid having you poke every single individual barnacle with a pin to double check, we just go with: empty = dead. For mussels, culinary fans will know that mussels gape open when 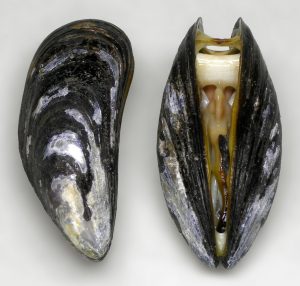 Mussels gape when they die, but also sometimes gape slightly when they are hot. Tap the mussel to see if it closes up, if not, it’s dead. (Photo: Wikipedia)

they are dead, for a similar reason to barnacles; to close the shell, the mussel has to actively contract the muscles that bind the two valves. One caveat is that when it’s hot weather, mussels sometimes open their shells a tiny bit, and use evaporation to cool themselves, and avoid getting steamed in their own shells. However, even if this is the case, they will “clam” up, sometimes quite slowly, when physically disturbed if they are still alive. So a wide-open mussel, or a non-responsive gaper, is a dead mussel.

Snails and limpets can be assessed by turning over their shells. If you aren’t physically able to turn over a limpet, you can be pretty sure it’s still alive. When snails are still living in their shell, they will retract into the shell when you pick them up, and cover the opening with a thin plate also called an operculum (are you sensing a theme here?). If that plate is absent, most likely the snail that made the shell is dead. If that shell is occupied by a hermit crab, it does not get included in live epifauna – see the above “rule of thumb“.

Thanks for all the great questions and ideas. Please keep them coming, it helps us strengthen our monitoring and training to have your feedback and questions. Check out our FAQ in the Volunteer Toolbox on the Crab Team website for more protocol questions.