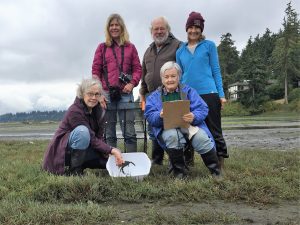 WSG Crab Team volunteers at Kala Point, near Port Townsend, captured a single European green crab during their final early detection sampling effort for the 2018 season on September 8. In follow up trapping efforts in the area, staff from Washington Department of Fish and Wildlife (WDFW) captured an additional green crab at Scow Bay, a marshy area between Indian and Marrowstone Islands. The two captures add to the list of sites at which green crab have been detected along Washington’s Salish Sea shorelines.

Volunteers with Crab Team have been conducting trapping surveys at Kala Point since the very inception of the early detection network, including the two months during the 2015 pilot year. They found the adult male (77mm across the carapace) in the second-to-last trap they retrieved in their 20th survey. That this, this is the only European green crab that was captured in 120 trap-days of monitoring. (Read more about the team’s experience in the PT Leader).

Knowing that green crab, even as adults, do not travel far, the crab that was captured has likely been in the lagoon for some time, perhaps its entire adult life. Based on the size of the crab, it is likely a member of the 2016 cohort, coinciding with the age of the majority of green crab captured inside the Salish Sea. This reinforces our observations that green crab, like many other species of crab, do not always enter traps, even if they are present in a particular site, and that repeated trapping efforts are a critical part of a monitoring program. 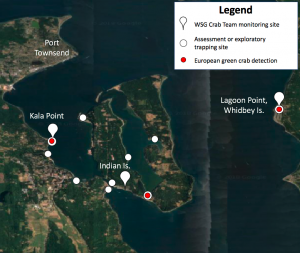 In response to this capture, WDFW initiated a rapid assessment trapping effort, which included intensive trapping over two nights at Kala Lagoon, as well as one to two nights of trapping in several nearby locations with suitable habitat. Chelsey Buffington and Richard Visser of WDFW conducted 171 trap-days of searching at four sites late last week, resulting in the capture of a single additional male European green crab at Scow Bay. This crab was actually first spotted when the two were setting traps in the area, and even photographed running around outside the trap, but could not be captured by hand! If you’ve ever handled green crab in the field, you can probably relate – their agility and defensiveness make them extremely evasive. But the culprit, identifiable by idiosyncratic damage to one claw, was brought up on the second trapping attempt.

To take a step back, and look at the big picture in the region, these two individual crabs are certainly worrisome; any time detections are made further into the Salish Sea, we are increasingly concerned they could be expanding their range. You might recall that a total of three green crab have been captured to date at Lagoon Point, just across Admiralty Inlet from this region. The recent captures fit into an emerging pattern where we are discovering crabs from the 2015 or 2016 cohort singly or in small numbers across multiple sites. Why didn’t we capture all of those crabs in 2016, or even 2017? Well, to some extent, this is just part of searching for a needle in a haystack. But there is also the possibility that crabs might become more catchable, more willing to enter one of our traps, as they age. (Read about how habitat use changes over the life span of a green crab in our newsletter) 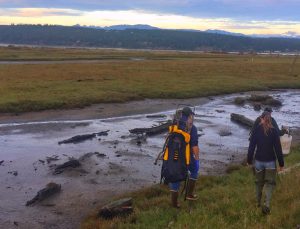 Combined with additional recent trapping in the area, including exploratory trapping by WDFW and Neil Harrington with the Jamestown S’Klallam Natural Resources Department, and Crab Team early detection monitoring at both Kala Point and Indian Island, it took 674 trap-days of effort over the past few years to capture these two individual crabs. That indicates that European green crab are, as yet, exceedingly rare in the region. The two crabs were returned to the University of Washington for tissue sampling by Crab Team staff. Genetic samples of these crabs will hopefully contribute to our understanding of the dynamics of how green crab are moving around in the Salish Sea.

September is the final month of early detection monitoring for the Crab Team season, and most other trapping efforts, including those by WDFW, US Fish and Wildlife Service at Dungeness Spit, and the Makah Fisheries Management Department in Makah Bay, will wrap up soon for the year as the water gets cold and the green crab become less catchable. Winter gives all of the groups involved time to assess and share findings from this past season and collaborate on plans for 2019. Crab Team will continue to manage the early detection monitoring network of 54 sites, and partner with other stakeholders to address the threat from European green crab.

Header photo: Wendy Feltham. As always, we want to thank all of the individuals and groups that facilitated the trapping effort, particularly the Kala Point Homeowners Association and the US Navy, who allowed access to properties trapped here, and have supported green crab management.