Sowing (Clam) Seed for the Indigenous Aquaculture Leaders of Tomorrow 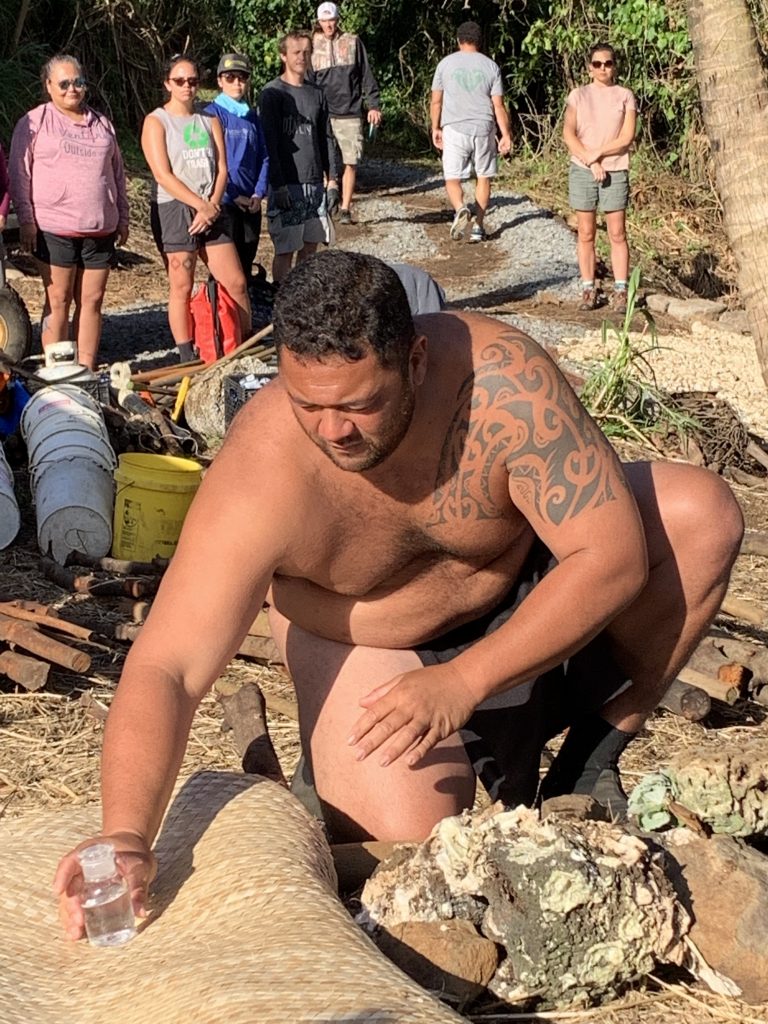 A participant of the Cross-Pacific Regional Collaborative Hub’s first gathering in Oʻahu performs a ceremony.

On an early morning at Kapapapuhi Point Park, one of the few public access points to Puʻuloa (Pearl Harbor)in Oʻahu, Amanda Millin stands knee deep in mud with chainsaw in hand, preparing to remove an invasive mangrove tree with her crew. This is a typical day for Millin since she began working as food sustainability project manager for the Mālama Pu‘uloa project, which includes uncovering loko iʻa (traditional Hawaiian fishponds), watershed management, water and soil quality improvement, and planting native plants. How she landed in this new role can be traced directly to when, as a student, she was invited to attend the first summit gathering of the Cross-Pacific Regional Collaborative Hub for Indigenous Aquaculture held on Oʻahu, February 2020.

The Collaborative, coordinated by Washington Sea Grant (WSG), is catalyzing a network of stewards, knowledge holders, researchers and students working to advance sustainable Indigenous aquaculture practices and enhance seafood production in the Pacific region. Sea Grant programs in Hawai‘i, Alaska and Washington have nurtured partnerships to build this regional network.  Fostering leadership among young scholars — by providing training, topical coursework, fellowships, and opportunities to network with Indigenous groups — is one of the Collaborative’s key goals.

Millin was working on her Masters of Advanced Studies in Marine Biodiversity and Conservation at Scripps Institution of Oceanography when she was invited to help plan and participate in the Collaborative’s first gathering. At the time, she was unsure how an Indigenous aquaculture gathering with over 125 participants representing dozens of Indigenous groups from across the Pacific would work. But within the first day, she saw similarities among their aquaculture systems and how intertwined each one is within their unique places, ecosystems and cultures. The gathering inspired Millin to change the direction of her capstone project to Indigenous aquaculture and, ultimately, altered the course of her career.

Millin’s story is just one of many instances in which students at various career stages have engaged in place-based learning through the Collaborative. These experiences have included: site visits and hands-on work restoring ancient clam gardens and fishponds; producing videos; publishing papers; and learning about place-based research. Each experience provides early career STEM leaders with fresh perspectives on marine science, restoration and Indigenous knowledge — and how they might approach educating their communities for the next generation. Here are a few highlights of how working with students have been central to the Collaborative so far, and what is yet to come.

The first summit gathering was held at the Kākoʻo ʻŌiwi farm and Heʻeia fishpond on Oʻahu and organized by the Hui Mālama Loko Iʻa network and Kua ‘aina Ulu ‘Auamo. Funding came in part from NOAA Sea Grant through the Hawaiʻi, Alaska and Washington Sea Grant programs, which also participated in the gathering. The gathering served as an epicenter for sharing knowledge and was ideal for informal workshops, conversations over meals, and hands-on efforts, such as rebuilding a 120-foot kuapā (seawall) at Heʻeia fishpond with bare hands and teamwork.

Four students from the Northwest Indian College also attended: Alisha Jefferson (Lummi), Roberta Hall (Lummi), Tamara Tso (Dine’) and Layla Wilbur-Westerdorf (Swinomish). Alisha was able to witness traditional Hawaiian aquaculture systems first-hand. Reflecting on how the experience could help guide projects back home, she observed: “Hawaiian traditions of sharing, community and a strong relationship to the land ties it all together. Their community is really immersed in it. We are beginning to start our clam garden, so seeing this is encouraging.”

The students gained other insights from the gathering in Oʻahu. “Today we helped rebuild a seawall,” Wilbur-Westerdorf said. “There are rocks in that wall that I touched. This is extremely empowering. Here you get to be with people doing empowering things.” 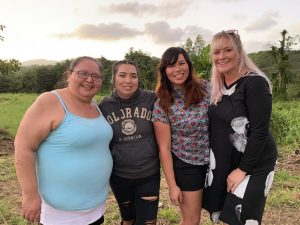 Tso noted that the food shared at the gathering had been harvested locally by the very people who cooked it. Layla carried this thread further: “Our culture starts with our food. If we lose the harvesting of clams, we lose our culture. It felt like a celebration [at the gathering]. I’ve heard this before, that this was the norm, much like our potlatches. And it feels right, it feels like home here.” Hall added, “This is the direction we students would like to see our own community go.”

The Collaborative also cultivates opportunities for community-to-community learning that crosses international boundaries. For example, Northwest Indian College students met with Coast Salish Indigenous groups such as the W̱SÁNEĆ and Hul’qumi’num who are restoring their clam gardens in what is today Canada, in partnership with Parks Canada. Through this connection, the Swinomish Indian Tribal Community coordinated an exploratory trip to the clam gardens, where the students gained firsthand experience practicing ancient mariculture techniques.

Sonni Tadlock is a graduate of the UW School of Public Health and an alumna of the Northwest Indian College. With a fellowship from WSG, Sonni’s master’s thesis focused on the planning for the Swinomish clam garden. She developed a sociocultural framework for restoring ancient mariculture, basing her framework on observations of the relationships with the W̱SÁNEĆ and Hul’qumi’num Nations. Her story is one of the many examples of how students have contributed original research to the Indigenous Aquaculture Collaborative project.

Another example is the work of Sonia Ibarra, who recently earned her doctoral degree from the University of Alaska Fairbanks (UAF). Ibarra’s thesis focused on Indigenous communities in Southeast Alaska — in particular, she studied the impacts of sea otters on customary shellfish resources and the importance of Indigenous governance for productive clam beds. She reoriented the standard Western approach to science by adapting her project to reflect the community’s values, weaving traditional knowledge with Western science and prioritizing the needs of the community over other goals. Ibarra has contributed to the Collaborative by sharing her findings in a seminar and continues as a member. This fall, she begins her career as program coordinator for the Tamamta Program at UAF. 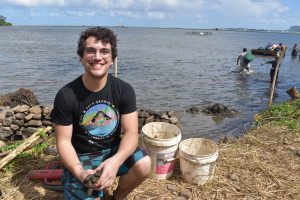 Octavio Cruz is a recent Western Washington University graduate that began his journey studying clam garden restoration with Professor Marco Hatch. Cruz was among the students at the gathering, where he lifted boulders while helping to restore the fishpond. Today, his career is underway as a marine data researcher at Pauquachin First Nation. He is leading the marine data analysis on the Saanich Peninsula, near Victoria, BC and working with native communities to apply both scientific and cultural tools to manage or restore traditional food systems, as well as conducting marine monitoring around the Gulf Islands. Of the Collaborative he says, “so many meaningful connections were made or strengthened through it.” In fact, Octavio has now brought the Pauquachin First Nation into the Collaborative.

Rosie Alegado, director for the Center of Excellence in Integrated Knowledge Systems with Hawaiʻi Sea Grant, mentored “community-embedded research” to a cohort of undergraduate students in the Our Project in Hawaiʻi’s (OPIHI) program. Alegado emphasizes to students the importance of collaborating with community when undertaking any research — and that collaboration should begin from the project’s inception. Working with Rosie and OPIHI staff, a recent group learned hands-on skills in the lab and in the field with traditional fishpond practitioners. They learned to dissect fish, collect samples, and even learned to throw a fish net. Rosie says, “By immersing themselves for a full year, the students prepare for future success in the sciences.”

Often, communicating about science is just as important as the research itself. Professor Anne Salomon’s class of graduate students from Simon Frazer University took this to heart. Many innovations from the past provide viable and timely solutions for challenges in shellfish and fishing food resources; with this in mind, the students created a story map of ancestral mariculture innovations, evaluating the commonalities and differences between systems around the Pacific Rim. The students came to the gathering in Oahʻu to experience an ancestral fishpond first-hand. The experience grounded them, providing inspiration and direct hands-on knowledge that shaped the story map. As Salomon says, “The gathering propelled the work forward so that it became not only a scholarly endeavor but an artistic one, grounded in a community of practice, that also documents the role of ceremony in building community cohesion and social-ecological resilience.” Ultimately, the map will be a key element of the Collaborative website and a living document that will evolve, catalyzing further research in ancestral mariculture around the Pacific and offering innovations for the future. 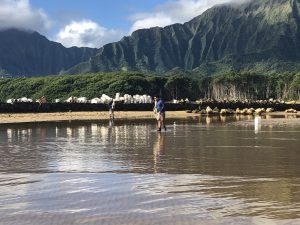 Students of Rosie Agado getting out into the field

WSG is also mentoring students through fellowships and student assistantships where they help with coordination and planning for the Collaborative. This includes a communications fellow, who will contribute to social media, produce videos and write stories about our Collaborative partners.

Looking ahead, Melissa Poe, WSG social scientist and project lead for the Collaborative, sees even more educational opportunities evolving for students. Alaska Sea Grant has plans to launch a one-year fellowship sponsored by the Collaborative, which will  provide new career skills to a recently graduated masters or doctoral student. Activities will include working towards biocultural restoration goals of a host tribe, as well as supporting a comprehensive review of Pacific region systems.

The Tamamta Program another graduate fellowship program at University of Alaska funded by the National Science Foundation, bridges Indigenous and western sciences to transform graduate education and research in fisheries and marine sciences. The merging of these two programs has great potential for becoming an ongoing Indigenous aquaculture fellowship in future years.

“We celebrate the learning outcomes and opportunities of all the various students from around the Pacific who are participating in the Collaborative,” Poe says. “We’re excited to shine light on this facet of our collaborative story!”