Emily here again, this time from back in Seattle. Our boots are washed, the gear is stowed, and we are all ready for some well-earned rest. But first, a quick update to fill you in on the rest of our rapid response sampling effort on San Juan Island (read about Day 1). 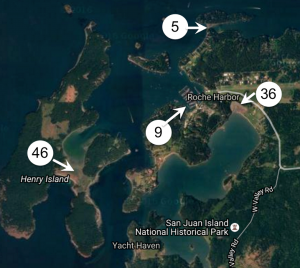 Number of traps set at each of the 4 sites trapped on Day 1.

Day 2: After setting traps on Monday morning, we headed out even earlier on Tuesday morning to check the traps, refresh the bait and move some traps to new sites. The good news was that there were no live green crabs captured in any of the 97 traps at four sites from Day 1. You’ll notice that we set 36 traps in the marsh at Westcott Bay alone, which is six times the monthly sampling effort. Because it is the site where the individual green crab was found, we thought it was important to add as many traps as possible, and to spread them out to parts of the marsh not typically observed to be sure we weren’t missing any pockets of green crab hiding out in the less accessible parts of the marsh. 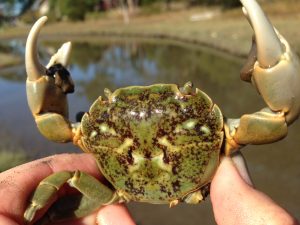 Despite all appearances, this is actually a purple shore crab (Hemigrapsus nudus) from White Point, showing us just how deceiving color can be (Emily Grason)

The majority of what we did catch was native shore crabs and fishes, very much in line with what we have seen at similar sites. When we reset traps at new sites, we also spent more time looking for green crab molts, and succeeded in that we didn’t find any! This is all good news so far and had us feeling pretty positive — if also pretty tired.

On Tuesday evening, we held a public presentation at Friday Harbor Labs, to invite anyone interested to learn about the green crab sighting, and meet the volunteers who monitor for Crab Team on San Juan Island – and even get a good look at the “crab in question”, which is much less fierce looking now that it is spending time at -20 Celsius! This event gave us the chance to provide more information on what to look for when trying to identify green crabs, and how our response effort is proceeding. 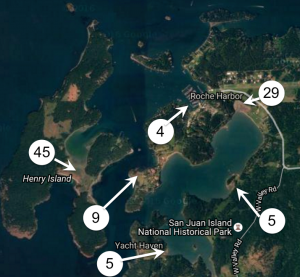 Number of traps set on Day 2 of sampling

Day 3: Our final job was to retrieve all of the 97 traps we set on Tuesday across six sites. If that sounds like a walk in the park (perhaps literally) compared with the other two days, consider (1) we were down to a skeleton crew of myself, Sean and Roy; and (2) Sean decided we should aim for the 11am ferry back home. We succeeded at collecting every single trap, but at the cost of a much later return time. It was utterly worth it, however, to discover that, again, all 97 traps were green crab-free! This brought our total effort to 194 traps across seven sites.

We set more than 32 times as many traps as a single Crab Team crew sets in a month. This is not to brag, this is just to emphasize the scale required for an effort of this kind. Catching no additional green crabs after such an intense effort gives us some reassurance that we are not missing major populations of green crabs hiding out near Westcott Bay. This does not mean, however, that we can say with certainty that volunteers captured the only green crab in the area. In fact, comparing the size of the molt Jeff found Monday to the crab captured in Westcott Bay suggests that there might be, or have been, another green crab in the area; that is, it’s possible the molt did not come from the crab that was captured. 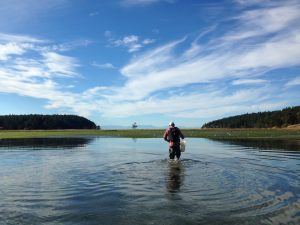 We sent Sean off to Henry Island to collect 40 odd traps. Good luck with the raccoons, Sean! (Emily Grason) 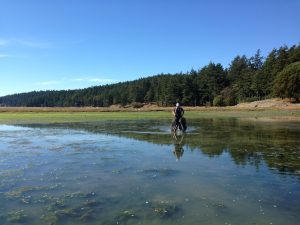 Sean retrieves the last load of traps from Henry Island before we head home. (Emily Grason)

The volunteers that survey Westcott Bay and Third Lagoon will return at the end of the month for the final sampling event of the year. We cease sampling when the tides switch to nighttime lows owing to logistics, but also because crabs stop coming to traps when the weather gets cold; it is not really worth enduring the dark, cold, wet days on the mud when the probability of actually finding a green crab, even if it is there, is quite low. However, monitoring will resume at all our sites next April, with special attention on this part of our region. We are discussing the potential to add a site or two to San Juan Island. In addition, it would be valuable to repeat this intensive survey effort next spring, if resources permit. In the meantime, we trust that residents of and visitors to San Juan Island will keep a good eye out for the European green crab, and let us know if they spot any evidence there are more! 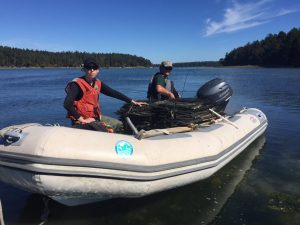 Emily and Roy following the retrieval of the very last trap from Henry Island. Ready to head back and clean up (Sean McDonald)

I want to emphasize that the fact that we were able to pull off such a large response on very short notice is due to support and assistance from a number of individuals and groups that gave us access to sites, a place to stay, and coffee at 5:30 a.m. In particular, Roy Clark and the Washington Department of Fish & Wildlife (WDFW) deserve a big “Thank You” for bringing us a boat and taking good care of us as we shuttled around to sites. Roy was also eager to hop out and get muddy with us collecting traps and hauling gear! We couldn’t have done it without him. Thank you to the staff of Friday Harbor Labs for being such excellent hosts. We frankly felt kind of spoiled at being able to stay at such a beautiful place so well set up for the work we needed to do! Roche Harbor Resort has been extremely supportive of our response efforts and helped us access sites and take care of boat logistics. In addition, the National Park Service, the San Juan Preservation Trust, and a number of local residents also generously allowed us to cross their properties to conduct our sampling, helped us get in touch with the right people and promised to help search for this crab.

Next we will discuss the results of our exploratory survey with WDFW, and discuss a future plan of action in terms of monitoring and response. 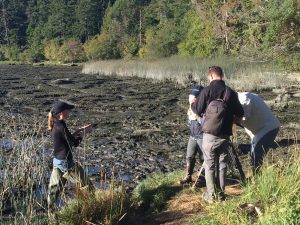 Before I crawl into my own bed, I’d like to leave you with a little teaser. We were accompanied this morning by Katie Campbell and her team from EarthFix and KCTS. Katie, Greg and Jared spent some time adventuring with us in the mud at Westcott this morning (seriously – we need to get them to volunteer, they are natural mud-skippers!) and are helping us get the word out about green crabs. Look for something from them soon featuring me and Sean and a lot of staghorn sculpins; P.S. THEY BROUGHT A DRONE!
Return to News page.
Return to Crab Team home page.
Follow @WAGreenCrab