Protocol in Focus: Male or Female?

TLDR: We made a guide to help tell the sex of crabs, and offer some tips on how tell sex confidently on any crab.

It’s no coincidence that crabs are front and center here at Crab Team, and while we are focused on early detection and monitoring of invasive European green crab, monitors also track a lot of valuable information about the native crab species that vastly dominate trap catches at the 55 sites in the network. In addition to information about the total number of each native crabs species found in the minnow and Fukui traps each month, monitors measure the size of a subset of these crabs, and they record the sex of all of the crabs in this sample. In some cases this can top a thousand crabs (!), sorted by hand (!), all done while tiny, and sometimes not-so-tiny, pinchers (!) are demonstrating their crabby preference to be left alone.

Why do we do it 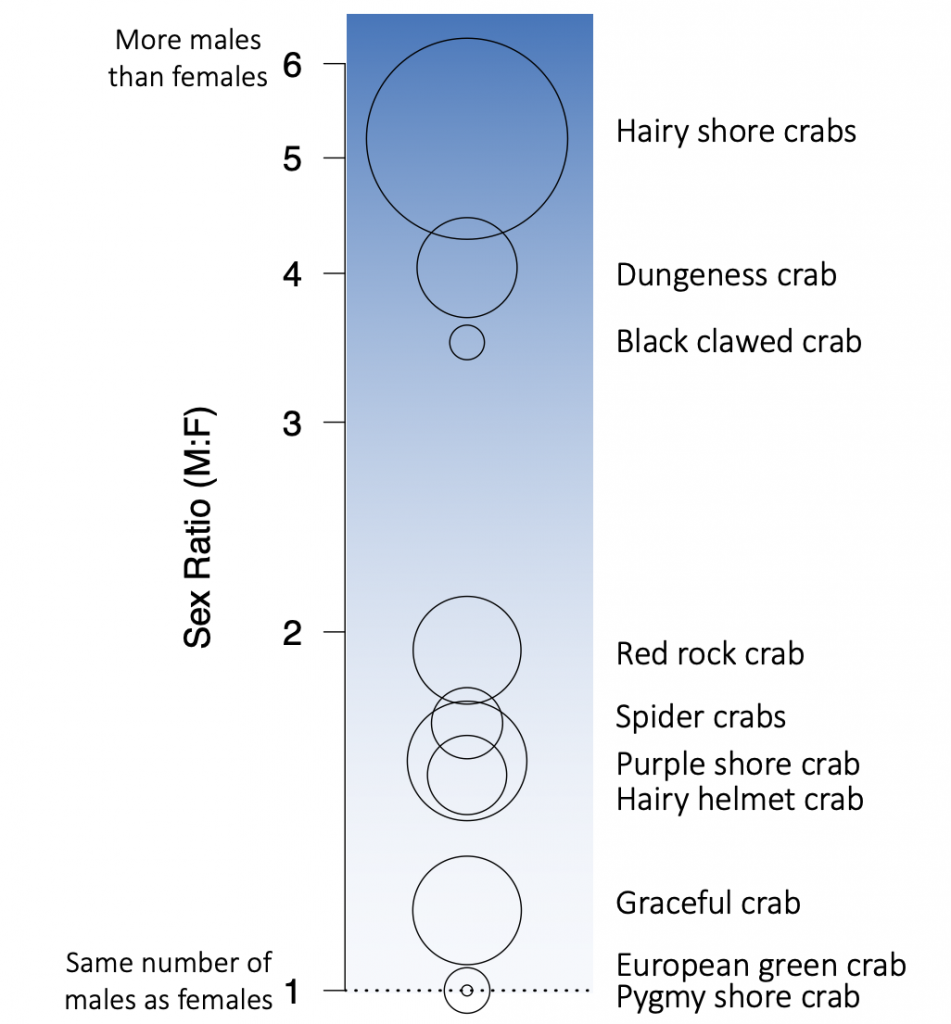 Figure 1: Average sex ratio of males to female crabs by species captured in Crab Team trapping surveys from 2015-2020. Points are scaled by the total number of crabs captured for that species.

Tracking the ratio of male and female crabs in the sample provides richer insight into the lives of native crabs than the total number alone would do. For nearly all of the crab species we record, traps capture more males than females. But this varies by species and season. For hairy shore crabs (Hemigrapsus oregonensis – HEOR), monitors count about five males for every female, on average, red rock crabs (Cancer productus – CAPR) is closer to two to one, and male and female green crabs (Carcinus maenas – CAMA) and native pygmy rock crabs (Glebocarcinus oregonensis – GLOR) are equally represented in traps (Figure 1). Notably, there are no species for which we trap more females than males. Rather than representing a true population imbalance, male bias can occur because male crabs are generally more risk tolerant than females. To end up in our traps, crabs have to navigate a number of hazardous situations in pursuit of a possible meal, including emerging from protective shelter, and a greater chance of encountering other crabs of the same species that could perceive them as a competitor. If females take those risks less frequently than males, they would be underrepresented in trap captures, relative to the population. 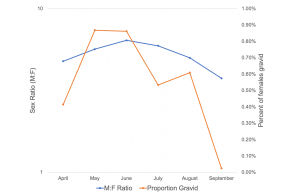 But even within a species, we’ve observed that crab sex ratio in traps can vary across the trapping season. This could be linked to reproductive patterns, because female crabs become even more reluctant to enter traps if they are carrying eggs. We do see evidence for this in Crab Team data from 2020 (Figure 2). Though the signal is not strong, there is a trend we observe in which catches of hairy shore crab are more male-biased (increased male to female ratio) during the middle months of the season (May through August), the same months when the greatest proportion of females captured are recorded as bearing eggs.

How do we do it 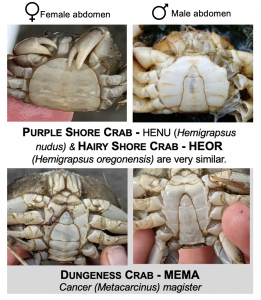 For both species of native shore crabs (top row) the abdomen shape of females (left) is very different from males (right). By contrast, in Dungeness crabs (bottom row) the difference between female (left) and male (right) abdomens is more subtle.

By taking a look at the underside of crabs, we can learn a lot more about how pocket estuary communities work. But how is it done? Many folks are familiar with the general rule for telling male and female crabs apart – males have narrow abdomens while females have wide, rounded abdomens. But it turns out that some species of crab, and some sizes of crab, make this easier than others. Hairy shore crabs, as adults, for example, have very “dimorphic” abdomen shapes – meaning the males look very different from females. But for other species, such as Dungeness crabs, the female abdomens don’t look as wide by comparison to shore crabs, so it can be easy to mistake them for male crabs. The key is not so much that all female crab abdomens (we like to shorthand it as “crabdomens”) look the same, regardless of species. Rather, for each species, the male crabs look different from the female crabs in a consistent way.

Why are abdomens different?

First it might be helpful to understand why male and female abdomen shapes differ from each other. When female crabs extrude their eggs, they attach the eggs to the feathery appendages of the abdomen, called pleopods. Size matters for females, and the more real estate they have to attach eggs, the more eggs they can rear to hatching. So, for each species, mature females generally have abdomens that are as wide as possible – given the constraints of their overall body plan. In some species, like the shore crabs, the underside of the crab is very wide relative to the length of the crab, front to back. In species like Dungeness, the legs are closer together relative to the length of the crab. Ultimately, this width distance between the base of the legs on the left and right side of the crabs dictates the maximum width of the abdomen that is possible for that species. In reproductively mature crabs, then, females have abdomens that are as wide as can fit between the legs of that species, while males have consistently narrow abdomens that leave space on the underside of the shell between the edge of the abdomen and the base of the legs.

How to tell the difference

Though determining the sex of crabs will be straightforward for the vast majority of trap catch, given the sheer number of crabs processed, it’s a certainty that a few “edge cases” will pop up. For instance, juveniles of any species can be harder to distinguish by sex, and there are parasites that can change the abdomen shape that infect Hemigrapsus. But a few guidelines should work in nearly all cases:

It may be slow at the start, but honing your search image by taking the time to look carefully at the underside of crabs, and even under the undersides, to double check the anatomy, will speed up your sorting in the long run. You’ll get much faster at sexing even the smallest and rarest of crabs. Here are some more suggestions and resources to help: 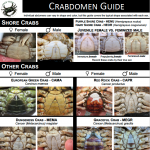 Announcing the Crabdomen Guide: A one page photo guide to the typical abdomen shapes of the most commonly encountered crab species. It even covers a few edge cases like juvenile females and feminized males. One caveat is to remember that color, either of the abdomen or any part of the crab, is not a helpful feature to tell males from females. 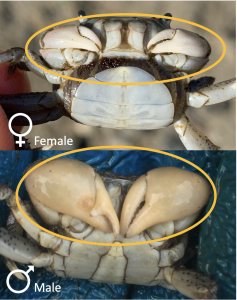 Work around – Claws: Some – but not all – species also show sexual dimorphism in claw shape. That is, the mature males have larger claws than mature females. This is most pronounced in shore crabs (Hemigrapsus spp.) where huge bulbous claws will tip you off to male before you can even flip over the crab. Smaller claws, however, could belong either sex, so you will have to look at the abdomen.

Sorting Strategies: We have seen a number of different strategies for rapidly sorting, counting, and measuring males and females, and each group has to decide what works for them. Some groups sex as they measure crabs, and some groups separate all the males and females before doing any counting or measuring. It’s entirely up to you.

Check out more Pro Tips on all aspects of the Crab Team protocol.