The second all-virtual Salish Sea Ecosystem Conference (April 26-28) offered everyone with an interest or involvement in the inland waters shared by Washington and British Columbia the chance to connect over a huge range of topics, impacts of last summer’s heat dome, southern resident killer whale status, environmental justice, and of course, our favorite topic – European green crabs. There was a lot on the conference schedule related to green crab, and we wanted to share snapshots of sessions that resulted from Crab Team projects and collaborations. These are updates on the research and teamwork through which WSG supports statewide management efforts. For the rest of this post, you’ll be hearing directly from Crab Team staff who attended or were involved with their take.

What are the trophic impacts of European green crab in the Salish Sea? 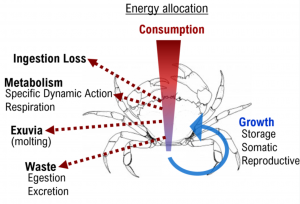 Schematic from Fisher’s poster of bioenergetics model of how what green crabs eats contributes to their growth and success. Click to access poster handout.

From Coastal Specialist, Alex Stote: Mary Fisher is a Ph.D. candidate at the University of Washington. Working with Dr. Grason and Dr. McDonald of Crab Team and others, Fisher’s featured research combines DNA metabarcoding and bioenergetics modeling to assess what European green crab is eating in the Salish Sea, and how that could impact ecosystems as the invasion progresses. Fisher extracts DNA from the contents of green crab stomachs and uses metabarcoding to detect distinct prey items, clams, crabs, etc. The prey identity and an estimate stomach fullness are used as inputs into a bioenergetic model to estimate green crab growth rates at sites where the crabs were collected. This information can be help determine green crab success at a given site; faster growth rates would indicate a greater likelihood of success – and ecosystem impacts – of green crabs.

You can check out the poster from this presentation.

From Crab Team Coordinator, Amy Linhart: Abby Keller is a recent graduate of the UW School of Marine and Environmental Affairs, where she began her work with environmental DNA (eDNA). In collaboration with a team of researchers, she is developing an interactive web application (R Shiny app) that addresses the challenges involved with the current tools available for detection of European green crab: trapping and eDNA sampling. Keller recently published results of a mathematical model that can use data from either or both types of sampling to better estimate how confident we can be about how many green crabs are present at a particular site. The app will help managers use this mathematical model. The goal is to provide an easy-to-use interface to plan assessment activities for European green crab abundance and interpret sampling results. Ultimately, this tool will help inform whether early detection, assessment, and removal efforts are meeting management targets. As she continues to refine this new app, Keller is developing a focus group of potential users – of you are interested, reach out to Crab Team.

You can check out the snapshot talk recording for this presentation.

From Emily Grason and Sean McDonald: Carolyn Tepolt, at Woods Hole Oceanographic Institute, has been collaborating with Crab Team to track the genetics of green crabs in Washington State since green crabs were first found at Dungeness Spit in 2017. The team’s initial work discovered that the population of green crabs on the Pacific Coast is genetically distinct from crabs found in Sooke Basin, B.C. the first large population of green crabs within the Salish Sea, discovered in 2012. Building on these early findings, Tepolt shared new research that followed the spread of green crabs within the Salish Sea since 2018, noting that the source of larvae (Sooke vs. coast) has varied across sites and over time. The initial detections at Dungeness Spit resulted from larvae getting washed in from the coast, but more recently, particularly at sites in Whatcom and Skagit counties, there is evidence that larvae from Sooke Basin have also dispersed further into the Salish Sea. In fact, over time, an increasing number of individual crabs in those northeastern sites, places like Drayton Harbor, show a genetic signature reflecting both the coast and Sooke, indicating they are the offspring or descendants of both populations. This suggests there is ongoing mixing of these source populations at these sites. The distinct genetic signatures can act as tracers as we continue to track green how green crab are spreading throughout the Salish Sea and help identify important pathways to address when controlling populations.

From Site to Sea: Protecting Habitat Through an Integrated Response to the Invasive European Green Crab Across the Salish Sea 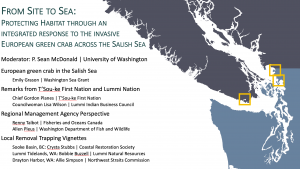 The outline for the panel, listing names and affiliations of all participants. On the map, the three featured removal sites are called out with yellow boxes, from east to west they are Sooke (BC) Drayton (WA) and Lummi Sea Pond (WA). Click to enlarge

From Jeff Adams: Emily Grason and Sean McDonald convened a distinguished panel of speakers for a panel on how green crab science and management efforts in the Salish Sea are using effective and productive communication and information exchange to cross borders and jurisdictions and to transcend scale in green crab management and control. While so many groups working on the same issue is generally a positive thing, it can also create challenges to sharing information. Open channels of communication and a shared understanding of management goals, strategies, and status facilitates overall greater success of efforts. For this panel, the eight speakers brought perspectives on the role of communication and collaboration in their efforts, from regional to local green crab control and from sovereign tribal to state or provincial management, over the 10 years since green crab was first detected in the Salish Sea. Chief Gordon Planes (T’Sou-ke First Nation) and Councilwoman Lisa Wilson (Lummi Nation) shared concerns for impacts of green crab to the natural resources the tribes and first nations have relied upon and cared for since time immemorial. At the same time, they were encouraged by the collaboration and communication with co-managing agencies and with partners in the region to address green crab threats. As representatives of regional natural resources management agencies, Renny Talbot (Fisheries and Oceans Canada) and Allen Pleus (Washington Department of Fish and Wildlife) shared their agencies’ history and current activities around green crab and how important collaboration has been in establishing monitoring and control efforts and acquiring and leveraging resources and public involvement on both sides of the border. Convening several years ago to develop a shared vision for managing green crab across the border, the Salish Sea Transboundary Action Plan, created a pathway for the agencies to work together within their respective jurisdictions and formed the foundation for future communications and collaborative management. The final panel presentations included three vignettes of local removal trapping efforts, Sooke Basin, Drayton Harbor, and the Lummi Sea Pond. Crysta Stubbs (Coastal Restoration Society in British Columbia), Bobbie Buzzell (Lummi Natural Resources) and Allie Simpson (Northwest Straits Commission) spoke to the importance of transparence and collaboration with local partners landowners to tackle the logistics of removal, as well as communicating their findings broadly to learn from other similar efforts in other locations. The session concluded with panel discussion, during which panel members shared more about the importance of effective communication in engaging public support, political will and resource mobilization to understand the issue and collaboratively implement effective control measures.

It will be just another couple of years until hopefully we have the chance to meet in person again, at the next Salish Sea conference. But the pandemic has taught us many lessons, shortening the virtual distance across our groups in ways that have ultimately improved the ways we connect with each other as partners and collaborators in the efforts to manage European green crabs.