Since this report was made, we have determined that the evidence originally submitted of the crab’s identity was not verifiable as a direct observation of the crab. Because European green crab is currently very rare in Washington’s Salish Sea, the majority of reports are of mistaken identity. This is why photographs of the crabs captured are required before we can confirm a sighting. It is therefore with some relief that we retract this report as a confirmed presence of European green crab in Port Angeles Harbor.

The presence of a European green crab has been confirmed for the first time in Port Angeles. Two individuals were captured in a single ring net by a recreational crabber fishing off the Port Angeles Pier early this fall. The capture was reported to WSG Crab Team two weeks ago, setting in motion an expanded early detection effort to determine the abundance and extent of any green crab population in Port Angles Harbor. No additional evidence of European green crab was found during additional trapping and shoreline searches last week. 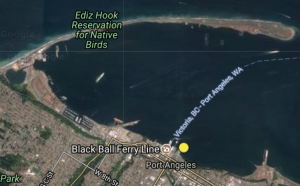 Port Angeles Harbor has been an area of interest for Crab Team, because it is very close to an established population in Sooke Basin, which, until 2016, was the only known population of European green crab in the Salish Sea. The concern was that some of the more protected parts of the harbor could be at high risk of invasion, particularly since finding the small population of green crab at nearby Dungeness Bay. The western part of the Strait of Juan de Fuca has very little habitat considered to be most favorable for green crab survival. Yet, if a great deal of larvae are being washed into Port Angeles harbor from Sooke, a sufficient number might be able to survive and reproduce, founding a population that could be a source for further spread.

The assessment effort, led last week by Washington Department of Fish & Wildlife, totaled 34 traps at four sites, and no additional European green crab were found. No molts or live crabs showed up in searches along the riprap shorelines. Searches concentrated around the city pier where the two crabs were trapped, the marina, and a few other key locations. This time of year isn’t ideal for finding green crab; the crabs are starting to hunker down as temperatures drop. Additionally, trapping this time of year is very tricky, because the timing of tides and the stormy waters make it difficult to safely and effectively set traps in the right places. Nevertheless, if green crab were in the trapping area in large numbers, some would have been found in traps. Failing to find any suggests that green crab are not extremely abundant in the harbor.

Further trapping will be conducted when conditions and logistics permit, and there are several sites of interest that have not yet been surveyed. In the meantime, however, there are a number of eyes on the beaches of Port Angeles. Fall crabbing season in Area 6 opened in October, and recreational crabbers frequent the city pier where the green crab were captured. Conveniently, Feiro Marine Life Center is located next to this pier, so staff and volunteers can chat with crabbers about what to look for and help keep an eye out.

For more information on what to do if you think you’ve found a European green crab, check out our website.