Monitors Capture Their First in Green Crab in Chuckanut Bay 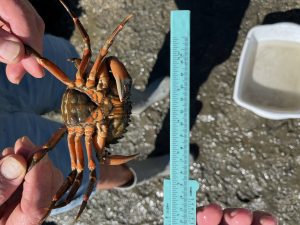 Ventral view of female crab captured by volunteer monitors. The bright red-orange underside is characteristic of a crab that hasn’t molted in a while. The color along with the size of the crab indicates this female has been nearby for at least three or four years.

Crab Team volunteer monitors have been working in Chuckanut Bay since 2017, and just last month they pulled up their first live green crab during monthly sampling. The crab was a larger (77mm) older female, indicating she’d been present at the site for at least three or four years.

In 2019, three green crabs were captured by Washington Department of Fish and Wildlife in assessment trapping. Since that time, no further live captures have been made, including in either ongoing monthly monitoring by Crab Team volunteers or by WDFW in follow up annual assessments. Volunteers knew there were still at least a few green crabs in the bay, however, as they found a total of 3 molted shells in 2020 and 2021 (marked as pale yellow circles in the map) while on their long beach hike (see header photo) from the parking lot to the trapping site. 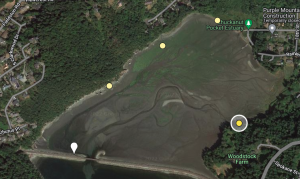 While this is not the first capture of green crab in Chuckanut Bay, it is notable for its location. The three previous captures were all made in nearly the same exact location, a deep pool at the mouth of Chuckanut Creek on the east side of the bay (highlighted yellow circle in the map). That part of the bay is relatively marshier and more protected than the Crab Team trapping site (white flag in the map), which is along the rip-rap rail road trestle wall separating Mud Bay from the rest of Chuckanut Bay. Finding a mature green crab in a more open part of the bay raises concern that green crab may have expanded out from that protective habitat and become more broadly distributed and established.

Some good news, however, is that WDFW conducted follow up assessment trapping that blanketed mud bay in 150 trap sets over the course of two nights, and only captured a single additional crab – at the mouth of Chuckanut Creek (this one a smaller, 59mm, male). 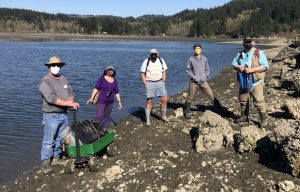 Volunteer team at their trapping site in 2021.

Occasionally, we do find crabs that manage to evade previous efforts, and of course we know that we don’t catch every single crab each time we set traps. Findings like these demonstrate the importance of revisiting sites where green crabs have been captured, not only through monitoring but also through expanded assessments on occasion. Thanks to the committed volunteers who make this level of ongoing vigilance possible!