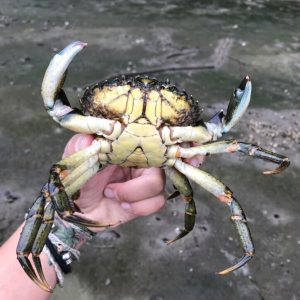 Last week was a busy one for European green crab monitoring on Washington’s inland shorelines. Two expanded trapping efforts were taking place simultaneously at the beginning of the week, with mixed results. The first, a trapping effort in Whatcom County conducted by Washington Department of Fish and Wildlife (WDFW) Technician, Chelsey Buffington, turned up three European green crab in Chuckanut Bay. WDFW conducted this trapping in response to the recent discovery of a green crab in Squalicum Harbor in Bellingham. The second trapping effort was conducted on Whidbey Island at Lagoon Point by Crab Team staff, Emily Grason and Kelly Martin, and volunteers. While green crab have been found at Lagoon Point multiple times over the last two monitoring seasons, thankfully only native organisms were captured (and released) during last week’s trapping effort. 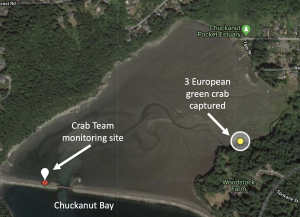 Map of Chuckanut Bay including the regular monitoring site location and the site where three European green crabs were captured. Click to enlarge.

Of the 142 total trap sets by WDFW over two nights in Chuckanut Bay last week, the three crabs were captured in the same exact trap: two crabs on the first day and one on the second. No additional green crabs were found in the 29 trap sets conducted in nearby pocket estuaries of Post Point and Clark’s Point. Chuckanut Bay is currently the location of a regular monthly Crab Team monitoring site that has been monitored by volunteers since 2017 with no detections of green crab, but the three crabs trapped by Buffington last week were found in a different part of the estuary just northwest of the monitoring site (see map). Two of the green crab were males between 78 and 80mm across the back shell, estimated to be about three years old, and the third was a 48mm female, estimated to be about two years old.  The fact that they were captured relatively close to a Crab Team monitoring site where they had not been detected highlights just how site-specific European green crab can be: they don’t travel far from their favorite habitat. The riprap habitat offered by the current Crab Team monitoring site, while not the ideal green crab habitat, would certainly be appropriate for them if they became more abundant. the site where the crabs were captured is situated in more marsh-like habitat, in line with sites we expect green crab to have the highest survivorship. Crab Team will consider relocating the monitoring site to this better habitat in the future.

At Lagoon Point, Crab Team staff and volunteers deployed 104 traps sets total over two nights, only to find an abundance of native animals: sculpins, shore crabs, and other fishes, crabs, and snails. This was a relieving result – the first assessment effort since 2017 that did not detect presence of green crab. Though we can never be sure that green crab have been entirely eradicated from the lagoon, it felt promising to have all zeroes (in terms of green crab) to report for our follow-up trapping data there this year.

A few additional notes on green crab in the region: 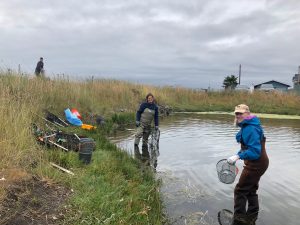 Crab Team retrieved the European green crabs to obtain tissue sampling for genetic and other analyses. Over the coming month, Buffington and colleagues at WDFW will return to the Chuckanut Bay site as well as other sites nearby that have not yet been monitored in the area to conduct additional trapping. At Lagoon Point, regular monthly trapping will continue as normal for the rest of the season and the need for additional follow-up trapping efforts will be evaluated over the years to come. The results of these trapping efforts emphasize both the value of our partnerships with groups like WDFW that can monitor areas that we have not yet been able to access or allocate resources to, and the value of consistent, strategic trapping thanks to the help of our volunteers and partners.

How can you help?

We can always use more eyes on the beach, for folks who know what to look for and what to do if they suspect they’ve found an invasive European green crab. Check out our post on “How to get your Eyes on the Beach Like A Pro” or the First Detector webinar, if you are interested in helping.

We are grateful to the Washington Department of Fish and Wildlife for their efforts in Whatcom County, to the residents of Lagoon Point for allowing us access to the site, and to Bridget Simon and Finn Gatewood for all their help in the mud!