Removal of European green crab in Drayton Harbor is now underway, thanks to the collaborative efforts of WSG, Washington Department of Fish and Wildlife (WDFW), the Northwest Straits Commission (NWSC) and other stakeholders. This is the second of two posts on efforts to date. Part 1 covered the development of the management team. 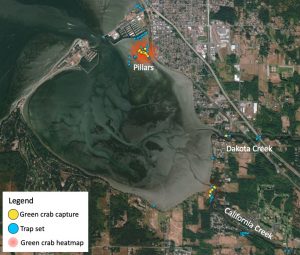 Removal trapping of European green crabs at Drayton Harbor officially began on May 26. Since then, staff with Washington Department of Fish and Wildlife (WDFW) and Northwest Straits Commission (NWSC) have been setting as many traps as time and tides allow. WSG and WDFW designed trapping protocols with the goals of removing as many European green crabs as possible, as well as simultaneously gathering robust information on green crab abundance, distribution, and population trends. Such fact finding ultimately makes removal trapping more efficient, because we can feed what we learn back into trapping strategies in an adaptive management process.

What have we learned so far?

As of last week, removal trapping had captured a total of 81 green crabs in more than 800 trap sets. Additionally, Crab Team monthly monitoring continues at the California Creek site trapped since 2017. This yields important data that can be compared to the 55 other Crab Team monitoring sites across inland Washington waters. So far this year, the Crab Team crew at California Creek has only captured a single green crab in three months of trapping (a total of 18 trap sets). Combined, this yields an average of finding about 10 crabs in every 100 trap sets so far this year – slightly greater than the same rate for 2019 (8.2 crabs per 100 trap sets). This difference is not entirely surprising because last year the majority of trapping was done during September and October, when colder temperatures reduce capture rates. Moreover, while last year’s assessment efforts were geographically broad, trapping this year has honed in on sites with high capture rates and trapped them repeatedly, driving the overall capture rate up as well. Drayton capture rates are much higher than 2020 (to date) rates at Dungeness Spit (2 green crabs in about 1,300 trap sets), but more similar to catch rates in Makah Bay (being managed by Makah Fisheries) and Lummi Bay (managed by Lummi Natural Resources). 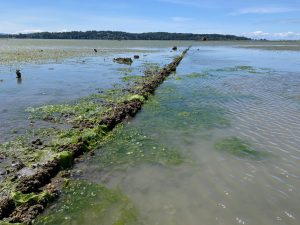 The remnant structures of partially buried pipes and pilings from a former pier in the northern portion of Drayton Harbor could be providing additional structure on an otherwise relatively featureless tide flat. They may offer green crabs protection from predation by larger crabs. Photo courtesy of Chelsey Buffington, WDFW (click to enlarge)

2. Within the harbor, local “hotspots” are emerging

So far this year, removal trapping in Drayton has focused on sites where greater numbers of green crabs were found during last year’s assessment efforts. While, similar to what we saw in last year’s assessments, green crabs are still found across a wide geography (map above), they are most dense in the northern portion, an area being called the pillars, due to the presence of structure from a remnant pier. In fact, the half-buried pipes and wooden pilings seem to offer extra protection to green crabs in an otherwise relatively featureless tide flat. Trapping at the mouth of California Creek also has consistently yielded green crab captures, though in much smaller numbers than the pillars site. A single crab has been captured near the mouth of Dakota creek, but several locations where green crabs were detected last year (e.g. No Name Creek) have so far yielded no captures. Spots where green crabs are routinely being found will be targeted for the most frequent trapping, with exploratory trapping being done opportunistically across the bay to look for sites where green crabs may also be living, but which have not yet been explored.

3. Most of the crabs being captured were from 2019

Based on their size, the vast majority of crabs captured are from the 2019 cohort, with a very few individuals found from the 2018 year class. We currently can’t discern whether these cohorts are the result of two separate settlement events, or whether reproduction from the 2018 recruits were retained in Drayton Harbor. Drayton Harbor is relatively small, overall quite shallow, and, for its size, has a relatively large opening, making it less likely that any larvae released by crabs in the bay would still be found in Drayton 45-70 days later when they reached settlement size. WSG Crab Team is working with Carolyn Tepolt, a geneticist at Woods Hole Oceanographic Institute, to collect tissue samples from crabs captured across the region and learn how they are moving around the Salish Sea, and across the West Coast.

Taken together, these observations confirm the critical and urgent need for an aggressive immediate trapping response, and we are gratified that every single one of the crabs removed is yet another that won’t be contributing to a population explosion we’d rather avoid. While, collectively, the Drayton Harbor team feels like we’ve hit a major milestone with this first month of trapping, the 800 traps are just the start of what will need to be a committed management effort in Drayton Harbor over multiple years. The current management plan and efforts are funded only through June 2021, though of course the team is working to enable the efforts will continue beyond that horizon. Removal trapping is not easy work, and it needs to be sustained to be effective, but it is currently the best tool at our disposal to keep numbers of green crabs manageable. Without any intervention, it is nearly certain that green crabs would rapidly grow to a population size intractable for control, threatening the beauty and ecology of the site.

Header photo: This large male European green crab captured at Drayton is one of the likely 2018 cohort. Credit: Allie Simpsons courtesy of NWSC