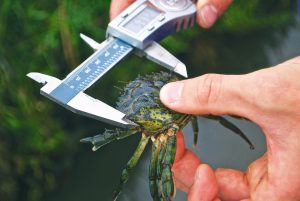 Measuring one of the green crab caught in a trap in the Wa’atch River estuary.

Last month, Washington Sea Grant Crab Team staff traveled to the Makah Reservation in the northwest corner of the Olympic Peninsula to participate in the Makah Tribe’s European green crab trapping efforts. As you might remember, in October of 2017, we reported the very first sighting of a green crab in Makah Bay. Since then, Adrianne Akmajian, Marine Ecologist for the Makah Tribe, has been leading extensive trapping efforts to better understand and manage the population in the Wa’atch and Tsoo-Yess river estuaries. Initial trapping efforts in October 2017 resulted in the capture of 34 green crab — 22 males and 12 females. Based on these numbers, tribal staff began plans to conduct more aggressive and regular trapping for green crab in 2018. Akmajian acquired funding, equipment, and began trapping several days every other week this spring. As of August 7th, 782 green crab had been captured.

Throughout this process, Crab Team staff have provided insight and collaborated with Makah staff whenever possible – we looked at a lot of satellite imagery and data from our Seattle desks to help determine what sites 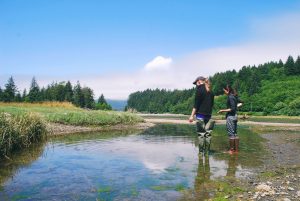 would be best for trapping. So, it was a particularly exciting opportunity for us to travel out to Makah Bay to get our boots in the mud of the Wa’atch and Tsoo-Yess instead of just seeing them on a computer screen. During our three days there, Dr. Emily Grason, Program Manager, and Dr. P. Sean McDonald, Co-Principal Investigator, gave a presentation to a group of Makah staff and interns interested in learning more about the history of invasive European green crab, their potential impacts on local ecosystems, and the work we do through the Crab Team monitoring program. The following two days we pitched in setting and retrieving traps, which resulted in the capture of 60 green crab from multiple year-classes (27mm to 86mm). Makah staff will continue to conduct their regular trapping efforts throughout the rest of this summer, which is the best time of year for trapping due to tides and the behavior of green crab.

Visiting these sites where numerous green crab have been captured was also an excellent learning experience for us. Many parts of the Wa’atch and Tsoo-Yess estuaries superficially appear as if they would be primarily freshwater – not saline enough to allow for the survival of organisms such as shore crabs, staghorn sculpins, and green crab. However, in the summer months when there is little rain and therefore little freshwater input in the rivers, these estuaries remain fairly salty due to tidal fluctuations. This gives us a better idea of what kind of sites green crab are able to inhabit which could be useful as we continue to monitor the Salish Sea. 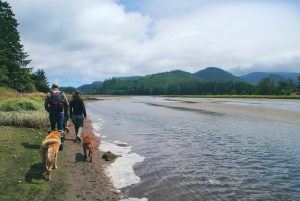 Sean and Emily are joined by some local dogs while scouting trapping sites in the Wa’atch River estuary.

Just as Crab Team wouldn’t exist without the extensive network of volunteers, agency partners, and tribal partners who support our monitoring efforts, there is a long list of folks who make the trapping efforts in Makah Bay possible. This includes a host of other Makah Tribal staff, interns and Neah Bay community members, staff from Northwest Indian Fisheries Commission, Washington Department of Fish & Wildlife, the Clallam County Marine Resources Committee, the Jamestown S’Klallam Tribe, the Quinault Tribe, U.S. Fish and Wildlife Service, and Americorps. Several Crab Team volunteers have also headed west to join the Makah’s efforts, taking advantage of the chance to get their claws on some green crab. In addition, funding from the North Pacific Coast Marine Resources Committee and Bureau of Indian Affairs has been instrumental in supporting the program and its staff as well. We are incredibly grateful to the Makah Tribe for hosting us and letting us participate in some of their work, and we look forward to our continued collaboration.

In addition to the hours spent working in the mud, we also managed to take some time to explore the outer coast on a couple of hikes to Shi Shi Beach and Cape Flattery. While tidepooling and scouring the wrack line, we found two crab species that typically aren’t found in the Salish Sea, despite looking very similar to species we often find in Crab Team traps! The first was the lined shore crab, Pachygrapsus crassipes, which closely resembles our hairy and purple shore crabs, except it only has two marginal teeth and it has intricate lined details on its carapace. We also found a Pacific rock crab, Romaleon antennarium, which, like the red rock crab, has large, black-tipped claws and scalloped marginal teeth. However, this species can be distinguished by the spots on its underside. It’s always exciting to add to our knowledge of native crab species! 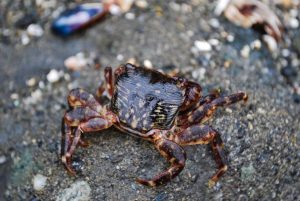 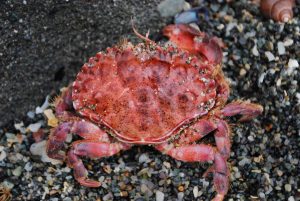