Evidence of Predation on European Green Crab from Padilla Bay

It looks as though Crab Team, now a network of 52 early detection sites monitored by more than 200 volunteers and several dozen staff from partner agencies, might have another ally out in the mud. Last week, during regular monthly sampling in a channel at the south end of Padilla Bay, Lindsey Parker found a European green crab. This was definitely notable, because we would rather not find any green crab, but not entirely surprising because the monitoring site was located near where another green crab was found during the 2016 rapid assessment effort. This new finding, however, appears to have been dinner for a local predator.

Parker is a Natural Resource Specialist at Padilla Bay National Estuarine Research Reserve, where four green crab were found last year as part of an intensive trapping effort. She, along with other research staff and Crab Team volunteers, oversee five Crab Team monthly monitoring sites in the bay, most of them located near where green crab were found last year (our map has additional detail). So far, in 2017, only one other European green crab had been found in Padilla Bay, a small male trapped at the northernmost site. This is only the second crab sighting in the bay this year out of about 150 traps that have been set, which is good news. Even better – finding that some local fauna had already ably dispatched the crab. 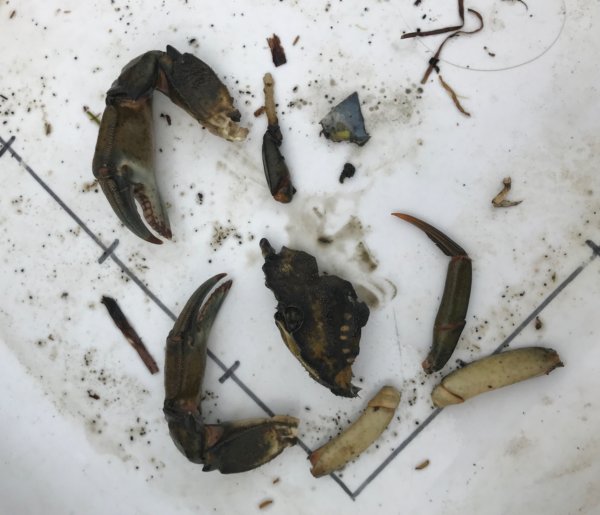 Parker said she found the shell pieces during the molt survey, but noted the shell still had a lot of tissue in it, indicating it was a dead crab rather than a molt. In addition, the claws had been removed, but remained uneaten. This evidence is fairly typical of a predation event. Rather than eating it whole, some predators will dispense with the business end of a crab before sitting down to dinner. Gulls and otter often remove and discard a crab’s claws before consuming the tissue in the main part of the crab’s body. Birds typically flip the crab over, to keep it from walking away, then peck through the underside to get at the meat. This feeding style often leaves the carapace of the crab intact, but in the case of the Padilla Bay crab, only a small part of the carapace remained, perhaps indicating a small mammal such as river otter or raccoon as the culprit. From what remains we can tell that the crab was an adult male from the size of the claws and the space between the marginal teeth.

Though we can only make educated guesses on the identity of the good Samaritan critter that dispatched this crab, we are certainly glad to see that some predator out there is capable of taking on even large individuals of this globally damaging invader.

In many cases native predators can help provide some defense against invasive species, but they are rarely, if ever, capable of fully eradicating them. More often, native predators reduce populations of invasive species somewhat, or confine them to less preferable habitat. On the west coast of North America, European green crab are primarily found on beaches, rather than in deeper waters, and mostly in muddy or low energy estuaries. This is different from their native range and other parts of the world where they are invasive, where they can persist deeper, and in a wider range of habitat types (e.g., rock, cobble, etc., read the research). Part of the reason could be that our most effective native predators live in those deeper, higher energy habitats. In Yaquina Bay, Oregon, Red rock crab prefer saltier parts of the estuary, and eat smaller green crab that try to venture into their territory. Green crab are only found high on the shore, under rocks, or high up in the estuary, where the water is too fresh for rock crab (read the research, and more from California). Other important predators could be leopard sharks, sculpin, herons, and small mammals such as otter and raccoon. These predators could limit where green crab can become abundant enough to have an impact, but almost always, invasive species have a way of finding refuges, spots where they can evade predation and eke out a living. Where, and how extensive, those refuges end up being determine how disruptive the invasion is as a whole.

One further question in invasions is whether native predators will recognize and be able to subdue an unfamiliar species of prey. For this crab from Padilla Bay, at least, that question has been answered.