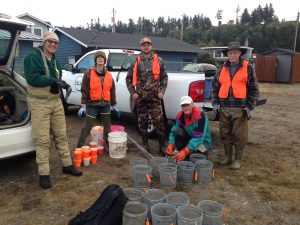 Following the recent capture of a single European green crab at Lagoon Point, on Whidbey Island (read more), Crab Team staff and volunteers, in consultation with the Washington Department of Fish and Wildlife (WDFW), headed back to the site last week to carry out assessment trapping as an expanded early detection effort. Over three days, the group conducted 114 trap sets, and captured only one additional European green crab.

This type of assessment trapping is the first step of following up on a green crab sighting, because it enables us to learn more about how many crabs are present at the site, and how widespread they are. Regular Crab Team monitoring includes a small scale trapping effort monthly at each of the 52 monitoring sites. Volunteers at Lagoon Point have been implementing the Crab Team protocols since 2016, including setting six traps along the south shoreline of the lagoon for one night each month, April through September (see map). This relatively limited scope of sampling enables us to sample repeatedly, and find European green crab even when they are still quite rare. 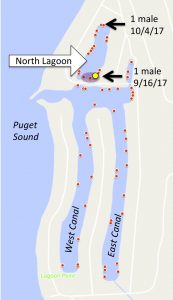 Click to enlarge – Traps (red dots) were placed across shorelines of the Lagoon Point community during the expanded trapping effort. The Crab Team monitoring site is at the south end of the North Lagoon (shaded patch), and the site of the original crab captured is indicated with a yellow dot. The additional crab captured during the assessment trapping was found at the north end of the same lagoon.

When green crab are detected in monthly monitoring, WDFW is immediately notified and the next step is to conduct broader trapping, to cast both a wider and finer net – so to speak – and get more precise information on the population. During last week’s assessment, Crab Team staff and volunteers set more traps, for more nights, in many more locations than for the monthly protocols. The team spread 57 traps across not only the lagoon where the initial crab was captured, but also the shorelines adjacent marina (the “canals”). More than 50 homeowners in the Lagoon Point community generously offered to allow us to set traps off their beaches, so we were able to spread traps to cover nearly all the shoreline. The traps remained in place for 48 hours, but were checked and re-baited on the middle day, resulting in 114 “trap-days” total.

On the final day of trapping, a single European green crab was caught in a trap on the north end of the same lagoon where the initial green crab was trapped. This small male was the only evidence we found of green crab presence in the area, despite additional combing of the shoreline for live crabs and molts (shed shells).

What did we learn?

Green crab are currently very rare at Lagoon Point. The two crabs captured were roughly the same age, making it likely they arrived at Lagoon Point around the same time – our best guess is late last year or early this year. Even though green crab have only been found in the lagoon, that doesn’t necessarily rule out the possibility that they could also be present in the southern canals. The canals are more “exposed” habitat, more favorable than the lagoon for larger subtidal crabs like rock crabs that could be predators for green crab. Therefore we might expect that if any green crab survive in the canals, they might not do as well as they have in the lagoon. 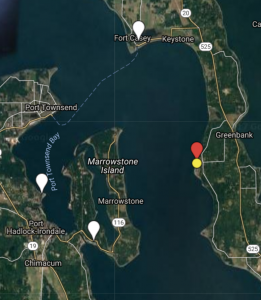 What we’ve seen so far at Lagoon Point is similar to a few other sites in the region where green crab have been found, such as Sequim Bay, Westcott Bay, and Padilla Bay. In each of these places, WDFW, Crab Team, and local stakeholders conducted more intensive assessment trapping after a green crab was found. And, in each of these places, either very few or no additional crabs were found during those follow-up trapping efforts. What this might suggest is that it is still very unusual for European green crab to get washed into these places as larvae, and only a few of the ones that do get washed in even manage to survive for very long. What WDFW and Crab Team want to avoid is allowing very small populations like these to go undetected and multiply to the point that we can no longer control their populations through removal. As the furthest site into Puget Sound where green crab have been confirmed so far, Lagoon Point is particularly important in this respect. If green crab were to go unchecked there, a breeding population could become a source for invasion further into Puget Sound.

Crab Team’s early detection monitoring trapping is suspended during the colder months because crabs do not come to traps as readily and safety risks for volunteers in winter weather. The rarity of green crab at this site provides us some assurance that we have not missed our window of opportunity to intervene. Volunteers will resume monthly monitoring at Lagoon Point in April. One additional benefit to the location of this finding is shorelines of Lagoon Point are lined with people who love the water. Nearly everyone has a boat or two at the docks, and many also have crab pots or oyster bags on their docks. This means that there are a lot of eyes on the beach that can help keep a lookout for any green crab that we didn’t catch (or any new ones that arrive). If we do start to see more evidence of green crab, WDFW and Crab Team will consider whether targeted removal 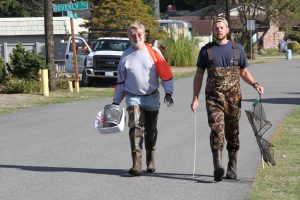 efforts would be necessary. It’s our hope that with added vigilance, we can reduce the changes that green crab could establish a foothold in Puget Sound.

As always, these assessment trapping trips would not be possible without the help of many people. We greatly appreciate the flexibility and adventurous spirit of the Crab Team volunteers who joined us on this adventure, as well as the homeowners who offered us permission to access their properties