Trapping for European green crab has mostly concluded for the 2020 season, enabling us to take stock of all that was accomplished this year and provide some status updates on green crab. The obstacles this year were considerable, but volunteers and managers were more than equal to the task, masking, attesting, and distancing, not to mention riding out wildfire smoke, to trap for green crabs. The next few posts will provide updates on what was accomplished and what we’ve learned about green crabs this year, and this first post will focus on an overview of sites within the Salish Sea.

This year, managers and volunteers collectively peppered inland shorelines with more than 11,000 traps, more than any previous year. In addition to WSG Crab Team early detection efforts, trapping was conducted by four new Washington Department of Fish and Wildlife (WDFW) technicians, as well as partners with the Lummi*, Jamestown S’Klallam and Makah Tribes, Padilla Bay National Estuarine Research Reserve (NERR), and US Fish and Wildlife Service (USFWS). Here are updates on key findings. 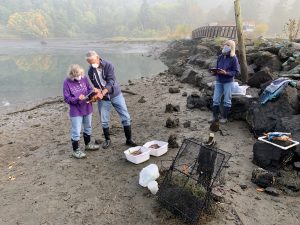 Crab Team volunteers and partners monitored 55 sites as part of the early detection network this year. While the scale of monitoring was reduced or delayed in some cases, to ensure safety of participants, together, the incredible teams completed more than 90% of regular monitoring efforts with many sites completing all six monthly efforts. This is an astounding success which was only possible with the adaptability, generosity, and commitment of the 250 volunteers and partner staff that participate. The best news of all: there were no new detections at Crab Team sites.

The only new detection site recorded during 2020 for inland shorelines was Birch Bay. Situated between Drayton Harbor and Lummi Bay, this has been a site of interest since green crabs were discovered in both adjacent water bodies last year. In addition, a community member reported finding a green crab carcass being predated by a gull in Birch Bay last year. Though it’s difficult to know for sure where a gull may have captured and brought a green crab from, observing this suggested that more could be nearby. In October, WDFW was able to conduct an assessment in Terrell Creek, considered the most suitable habitat for green crabs available in Birch Bay, and captured one young of the year crab in 50 traps (average capture rate of two crabs per 100 trap sets). 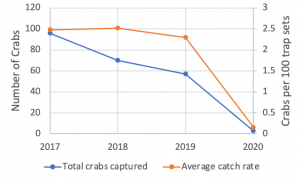 Number of green crabs captured, and average capture rate (in crabs per 100 trap sets) in Dungeness Bay since 2017, when green crabs were first detected by USFWS staff at the wildlife refuge. Click to enlarge.

A bright spot in the management of green crabs in the Salish Sea can be found in Dungeness Bay. When green crabs were found for the first time in Dungeness Bay, in 2017, it was the first “hot spot” where more than just a handful of crabs were trapped during assessments. Since that time, USFWS staff and volunteers with the refuge have been conducting intensive removal trapping. All spring, summer, and into fall, they set 50-150 traps for several nights a week. Though they’ve found a smaller number of green crabs each successive year since, the average catch rate has stayed relatively constant. This year, for the first time, that number plummeted – only 3 crabs were captured in 1,883 traps set, an average 0.15 crabs for every 100 traps set. That is, you’d have to set nearly 1,000 traps to capture even 1 crab!

This is the result of dedicated effort on the part of USFWS, as well as a little help from nature. In addition to removing crabs that were present, the region also may not have been subjected to influx of more larvae from coastal or other sources. Both are ingredients that are necessary to achieve such a substantial reduction.

Putting the pieces together 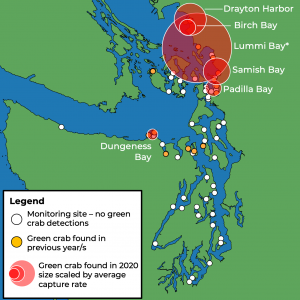 Map of sites along inland Washington shorelines trapped during 2020. The map does not include survey data from populations in British Columbia, e.g., Sooke Basin. Data from Lummi Bay provided by Lummi Natural Resources*. Click to enlarge.

Stepping back, what do we make of all that we have seen this year? It is a relief that there was minimal evidence of new detection sites this year. Yet the emergence of sites in Whatcom and Skagit counties as hotspots is currently the greatest concern. This year, these locations saw greater capture rates than any sites inland, and any prior years. In addition, the young of the year cohort, which started to arrive in traps in late summer, was more numerous at these sites than in previous years. A strong young of the year cohort indicates some of the population will remain over winter, and underscores the critical need to continue robust removal trapping efforts next year in these locations, and keep a close eye on adjacent shorelines for any further spread.

On the other hand, trapping in Dungeness Bay has shown that a dedicated effort, combined with favorable environmental conditions, can result in effective local population control. This year, green crab trappers may get some additional help from nature–forecasts are predicting a La Niña winter. Cold, wet La Niña conditions are celebrated perhaps only by two groups of people: skiers, because they bring good snow, and green crab managers, because they are less favorable to survival and recruitment of green crabs. Next year, our goal will be to capitalize off any opportunity this window affords.