Who Brings Your Seafood to You? An Interview with Pete Knutson 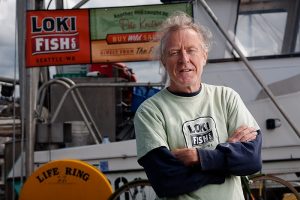 Pete Knutson owns Loki Fish Company, a family business. He fishes mostly salmon, with a bit of halibut on the side. He’s the director of the Puget Sound Harvester’s Association, an industry group that represents non-treaty commercial salmon gillnet fishers, and when he’s not fishing, he’s a professor at Seattle Central Community College. Pete has been teaching there for over two decades, and he has a Ph.D. in cultural anthropology from the University of Washington.

Pete’s great-grandparents came to America from Norway. He grew up in Everett and his father was a Lutheran Minister, while members of his family on his mother’s side built commercial fishing boats—there’s a wing in the Whatcom Museum where some of their work resides. Pete recalls, “This was pre-Boeing, so the decent jobs at that time were with the lumber mill or fishing. I was upwardly mobile so I was off in college, but I worked at the pulp mill in the summertime. Later I asked for a job from neighbors who were commercial fishermen.” Pete’s first job was on a purse seiner, a vessel that deploys a vertically hanging net to encircle dense schools of fish and then closes the opening at the bottom of the net like a drawstring bag. He took that job in 1972 and has fished every year since.

Asked why he decided to continue fishing as more than just a summer job, Pete said, “I got into fishing because I felt it was honest work. After protesting the Vietnam War, I knew I didn’t want to work for corporate America.” Indeed, Pete had gotten kicked out of Stanford University for disrupting the recruiting efforts of a weapons manufacturer. He ended up receiving his bachelor’s degree from The New School, a famous sanctuary for progressive thinkers. 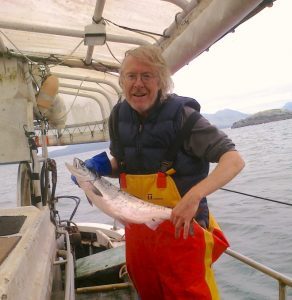 Pete in action on his boat. Photo courtesy of Loki Fish Company.

These days, Pete pilots a boat for Loki Fish Company, fishing in both Puget Sound and Alaska, while his son Jonah runs the business, as well as his own boat. Before Jonah, Pete’s son Dylan ran the business for ten years.  He says, “When my wife and I were starting out and bought our own gillnetter, I was in a fisherman’s co-op and it collapsed. Prices for salmon were so low we decided to direct market to the consumer in the early 1980s. Back then, my wife was down here while I was fishing up north: she’d take the orders and I’d fill them. My business has always been a family affair for the most part.”

When it comes to COVID-19 and its impact on business, Pete counts himself lucky: “We have a pretty strong restaurant clientele, which of course went away because of the pandemic, and our farmer’s market business was cut in half. But we were still able to sell fish off our boat in the spring and a lot more people would come to buy directly from us. Because of the pandemic, people are thinking a lot more about food safety and trustworthy sources.”

Pete credits the fact that his business landed on its feet to his emphasis on direct marketing, but he points out that COVID-19 hasn’t been easy for the rest of the industry. He points out “The prices fishermen were getting [early in the pandemic] were dire—like 10 cents a pound for coho! It’s gone up a bit now, but prices for chum and keta were cut in half too, and the runs haven’t been particularly strong. It’s going to be tough for the industry.”

Besides the Puget Sound Harvester’s Association, Pete serves on the Puget Sound Salmon Commission, a commodities board, where producers of Puget Sound gillnet salmon have established marketing, grading, and standardizing for the salmon they catch. Pete has held an elected position on the board for 15 years and says “We’re funded by non-treaty Puget Sound gillnetters, and I believe we’re the only fishing group in the state that voted to levy a tax on ourselves to form a commodities commission. It’s unusual for working class guys to tax themselves, but prices were disastrous, especially for species like keta and chum, so we needed a commodities board. The commission also does research, like testing for persistent pollutants in Puget Sound.”

In his role on the Harvester’s Association, Pete regularly points out to the public the benefits of having commercial salmon gillnet fishers contribute to the local economy and serve as a source for local food: “We’ve had huge fights with organizations that were supposedly pro-environment but backed by corporate interests and even oil money.” Pete helped organize a broad coalition to stop these anti-net bills, including Tribes who viewed an attack on non-Tribal commercial fishermen as an eventual threat to their own livelihoods, and even Pentecostal churches. “Building coalitions is tough work, but together we beat back these legislative attacks on fishermen and we did it more than once.” 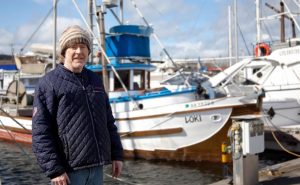 Pete standing in front of his boat. Photo courtesy of Loki Fish Company.

When he’s not fishing and advocating for gillnet salmon, Pete is also a professor of anthropology. He wrote his dissertation about workers on fishing boats. “Lots of students were going off to countries in Africa or to Indonesia for a year, but I wrote about the culture on a commercial fishing vessel. After getting his doctorate, Pete worked part time at Highline College and South Seattle College, before ending up as tenured faculty at Seattle Central. “A lot of what I do is work with students to reflect on things they take for granted. I may not have a certain prestige because I teach at a community college, but I have tremendous freedom and smaller class sizes. I have an incredibly wide, diverse student body, often on the lower end of the economic scale, and my students are the brightest people I’ve met. I always hear from professors at four-year colleges that they love getting students who come from the community college system. And for my classes I get to talk about my activism in the fishing industry. Fishing makes me more effective as an instructor because I live what I teach.”

Part of Pete’s activism has involved keeping the Seattle waterfront open for working people and working vessels. Traditionally, non-commercial boats had not been allowed at Fishermen’s Terminal, and the Port of Seattle had been looking to change that. But Pete, along with others, successfully organized to ensure that commercial fishing continues to be the mainstay of Fishermen’s Terminal, at least for now. “Fishermen’s Terminal is one of the largest commercial fishing ports, but it had been falling apart and it was clear the Port of Seattle had major plans to redefine the area. But when the Port did an economic study they found that Fishermen’s Terminal already supports thousands of jobs and generates hundreds of millions of dollars in revenue and wages every year. It’s like a small Boeing plant.”

Pete worked hard to make sure commercial fishermen like himself would be able to keep their places at Fishermen’s Terminal. He organized rallies, spoke to media and ultimately, he succeeded. Although the Port now allows non-commercial vessels to dock at Fishermen’s Terminal, if any commercial fisherman needs a spot, they have priority. And Pete wouldn’t have it any other way. “It’s just really honest work, to be able to fish and feed people.” 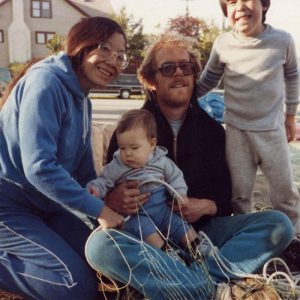 Pete with his wife and sons, at a younger age. Photo courtesy of Loki Fish Company.