One of the big successes this year was the launch of a local removal effort in Drayton Harbor. In spite of COVID, in spite of wildfire smoke, in spite of everything that 2020 had to throw at us, the collaborative management team was able to make great strides in trapping the Washington’s northernmost green crab hotspot. From May through October of this year, the crew was out trapping, trapping, and … trapping, with two goals in mind: 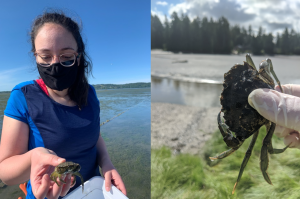 All of the mud slogging and crab wrangling was done almost exclusively by the three dedicated crew members: April Fleming and Lindsey Parker, seasonal technicians with Washington Department of Fish and Wildlife (WDFW), and Allie Simpson, the local coordinator of the effort working with Northwest Straits Commission (NWSC). While COVID prevented the participation by volunteers this year, on occasion, several partners including Washington Department of Natural Resources Aquatic Reserves, Washington Conservation Corps, and the Stillaguamish Tribe were able to provide limited, but very valuable, field assistance.

To help guide trapping efforts, WSG, WDFW and NWSC leadership collaborated on a plan that would be both flexible and systematic, balancing the goals of exploration and removal. Repeated, consistent trap sets were focused on four sites identified as local hotspots in 2019, and additional time was dedicated to investigating sites that had not yet been trapped, to verify we weren’t missing any undiscovered concentrations.

Meanwhile, the Crab Team volunteers at California Creek that helped uncover green crabs in Drayton Harbor continued their regular monthly monitoring effort which has been ongoing at this site since 2017. Continuing this relatively smaller scale of monitoring enables managers to closely track population changes over time in a consistent way. Another benefit is that we can compare protocols, and gauge how effective the Crab Team approach is relative to larger scale trapping in detecting green crabs and estimating population size. Though the number of traps set was very different between the removal effort (3,222 traps) and Crab Team monitoring (36 traps), both efforts resulted in similar capture rates in 2020.

In all, the combined efforts conducted 3,258 trap sets, and captured a total of 255 European green crabs. For reference, this is more than the total captured across all sites on inland Washington shorelines in 2019. The number is large partly because was both larger and more focused on hotspots than the assessments in 2019. The average capture rate in Drayton, which gives us a rough approximation for the population size, was about 8 crabs for every 100 trap sets in 2020, on par with 2019. 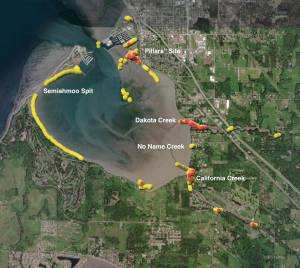 Broad scale trapping ringed the harbor, and extended well up both Dakota and California Creeks, but highlighted that green crabs are concentrated in a few sites, rather than spread evenly across the entire harbor. Notably, green crabs were not found in any trapping conducted in the western portion of Drayton, along the inside of Semiahmoo Spit, or in beds farmed by Drayton Harbor Oysters. The site called “Pillars” near the end of the old Cherry St pier, remained a productive trapping site throughout the year, as did the mouth of California Creek, though in lower numbers than the Pillars site. By contrast, no green crabs were captured all year in No Name Creek, though it had been a hotspot site in 2019. One new hotspot identified in 2020 was the mouth of Dakota Creek, where green crabs were present, but sparse in previous assessment efforts. Both creek mouths have a fair amount of eelgrass habitat, which may provide some structural protection for green crabs, which can tolerate the broad salinity swings in those estuaries. Protective structure also appears to be important at the Pillars site; though it is a relatively open tide flat, green crabs were mostly concentrated near partially buried remnant debris, including pipes and pilings. Green crabs were captured well upstream in California Creek, particularly later in the trapping season, but only at the mouth in Dakota Creek. 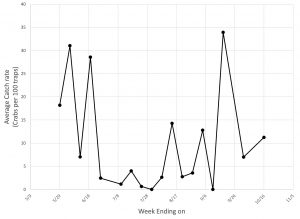 Weekly average green crab capture rate, in number of crabs per 100 trap sets in Drayton Harbor in 2020. Click to enlarge.

Capture rates were, overall, highest in late spring (late May – early June) and early fall (early September). These two seasonal peaks are similar to the timing of peaks at other sites, like Dungeness Spit. The early season peak might be driven by a seasonal warming in water temperature, which promotes faster metabolic and growth rates in crabs, and may send them scavenging for bait. The late season peak occurs around the time when a new year class of green crabs is just getting large enough to enter traps. Unfortunately, this year at Drayton, this new cohort was relatively strong, and showed a particular bump at the mouth of Dakota Creek. During the weeks when the new 2020 cohort was prevalent in traps, that year class comprised 30-70% of all green crab captures, and the previous year class comprised the remainder. The presence of two cohorts makes 2020 different from 2019, when nearly all crabs captured were from the 2019 year class. While not all of the new 2020 cohort crabs will survive the winter, seeing a fair number of successful new recruits in fall indicates that trapping efforts will need to continue next year. 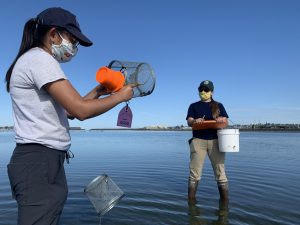 While longer term action is contingent on funding, removal trapping in Drayton Harbor will resume in March or April, when temperatures and tides make trapping more efficient, and continue at least through the end of June. This will, at minimum, enable managers to trap during the peak season. The collaborative management team will assess findings from 2020 to make any appropriate adjustments to trapping activities, including potentially refocusing some of the “core” trapping sites. Future involvement of volunteer or public participants in trapping activities would certainly be a goal as well, but managers will have to evaluate safety considerations related to the evolving situation with COVID as the season progresses.

The long term outlook for Drayton Harbor remains uncertain. A year of trapping is not sufficient to eliminate the local population, even if it is small. In other locations, such as Dungeness Spit, several consecutive years of trapping were necessary to see a real drop in population. Additionally, successful recruitment either from crabs reproducing within Drayton, or from another nearby source, could add to the Drayton population. Trapping just across the border in Boundary Bay has also detected green crabs both in 2020 and back in 2019. Tracking and removing crabs to learn about how populations are connected, and might be changing, will be critical to making trapping effective and ultimately to protecting Drayton Harbor’s shorelines.