This series of three posts was originally written in August, but was pre-empted by the news of European green crab captures on San Juan Island and in Padilla Bay. Better late than never, here are our field notes on green crab trapping in Willapa Bay during August of this year. Read part 1 and part 2

Because we were camping literally right next to the marsh we were trapping, we got to sleep in until 6am! However, we also couldn’t get any coffee before hitting the mud. This, after three days of intense field work, left us both pretty sluggish. But with the finish line of our field trip in sight, we didn’t let up. Very first trap: Green crab! Our adrenaline surged and we raced through the next few traps. Many of the traps had very low catches, but we caught four green crabs, all very close to the marsh vegetation, higher on the shore. This holds with the pattern that larger crabs we catch deeper, like Dungies, are probably keeping green crabs, which are smaller, close to protective shelter. However, we unfortunately didn’t catch any green crabs in our traps that were set up to compare cat food to mackerel as bait. 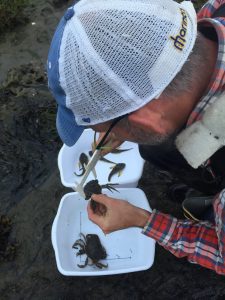 On the way back to Seattle, we spent a lot of time chewing over what we had seen (and Emily snagged a few z’s as well). Here is the summary:

Most green crabs end up in Willapa Bay not because they are hatched there, but because they get washed in from California on years when the conditions are favorable – El Nino years happen to be the best and we’ve just had a couple of doozies. We still have data to analyze, but the picture this paints for us is that 2015 was a good year for green crab larvae to get washed into Willapa Bay, but 2016 was not as good. We are probably hearing more observations of green crabs in Willapa and Grey’s Harbor this year because the crabs that washed in last year are now large enough to be noticeable. It’s interesting that the researchers trapping in Oregon caught more green crabs than we did, including some young of the year.

If we are correct that this year is not a good year for larvae to get washed as far north as Washington, that could be good news for inland shorelines as well as coastal embayments, reducing the possibility that larvae from California could have made it into Puget Sound. However, the population of green crabs in Sooke Inlet, west of Victoria, is apparently still established and reproducing locally. So the danger still exists that larvae could get washed out of Sooke and onto our shorelines.

Ed: The last paragraph of the original post went on to say that despite the lack of sightings along Washington’s inland shores, vigilance was still necessary. Since August, of course, a handful ofEuropean green crabs have been capture in Washington’s Salish Sea. Nevertheless, vigilance continues to be important. Now, when this species is still very rare, is the best time to intervene and attempt to reduce spread and slow population growth. I will leave the last two sentences of this post as originally written because they are still relevant:

Early detection is the key to successful control and eradication, because it is a lot more work to remove a species when it is very abundant. Just as the adage goes: a trap in time saves nine.