(Header photo: Allen Pleus, Aquatic Invasive Species Unit Lead for Washington Department of Fish & Wildlife with one of the green crab captured in Padilla Bay during the collaborative assessment trapping effort in 2016.)

The very first publication by Crab Team was just released in Management of Biological Invasions this week (you can read it), and while there are six authors listed, it was a contribution made by hundreds. The paper had two goals: to document the first confirmed captures of a globally-damaging invasive species in Washington’s Salish Sea; and to celebrate the collaborations that made these detections possible. These goals are inextricably linked because we don’t think we could have been successful at finding European green crab while they are still so rare without the corps of citizen science volunteers, and agency and tribal partners that together comprise Crab Team.

By far, the most effective strategy to avoid damage by invasive species is to prevent their introduction in the first place. But, knowing that larvae could get washed into our waters, the next best step is early detection of any possible new populations, removing them while they are still small enough to be manageable. In the case of green crab, this is extra tricky because they tend to do best in muddy habitats that aren’t as popular with beachgoers or crabbers. What’s more, European green crab have a similar appearance to many native species of crab, and might not be noticed as unusual, even if someone were looking right at one.

Covering all 2,500 miles of inland Washington shoreline is therefore a Herculean task. Since the launch of Crab Team in 2015, we’ve been building a network of volunteers, managers from tribes and agencies, and concerned beachgoers to find this needle in a haystack. 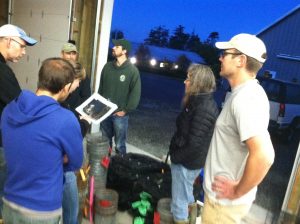 This paper shares the results of the first two years of Crab Team, when we grew to 26 monitoring sites, and European green crab were found in two locations in Washington’s Salish Sea – San Juan Island and Padilla Bay. The San Juan Island capture was made by Crab Team volunteers during their regular monthly monitoring effort at Westcott Bay. The first crab in Padilla Bay was found by Alex Alexander, now retired from the education staff at Padilla Bay National Estuarine Research Reserve. In both cases, in collaboration with Washington Department of Fish and Wildlife, Crab Team supported strategizing and implementing expanded trapping at these sites to find out how big the crab populations were. These efforts took literally hundreds of hours, coordinating teams of agency staff trekking through mud in the early hours, and pooling resources together to make it work.

Having State-level perspective on where European green crab are found, and how big the populations are is necessary if we are to reduce their impacts and spread. This is part of the coordinating role that Crab Team plays. But familiarity with, and investment in, local shorelines is an equally critical part of the response, and this is where Crab Team and WDFW benefit from the participation of volunteers, tribes, and agencies like Padilla Bay. In 2017, the importance of local management was reemphasized at Dungeness Spit, where USFWS staff and volunteers put in thousands of traps to reduce green crab, in Sequim Bay where the Jamestown S’Klallam Tribe conducted exploratory trapping, and in Makah Bay, where the Makah Tribe led assessment trapping in response to a green crab detection. 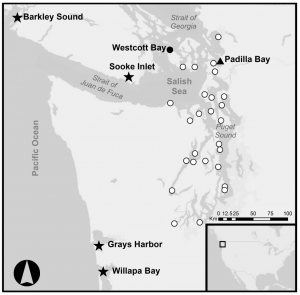 Figure 1 reproduced from Crab Team publication (Grason et al. 2018) showing Crab Team monitoring sites as fo 2016. White circles are sites where European green crab had not been detected, black circle where a green crab was captured in 2016. Stars are sites with known established populations, and the black triangle indicates the opportunistic finding of a green crab by Padilla Bay staff.

If you are familiar with Crab Team, you might wonder why this scientific paper, which only covers the findings through the end of 2016, is important. We have certainly been sharing news about findings through our blog, the media and other outlets. So, what does this publication add? This paper will help scientists track how European green crab has spread across the globe. Because of the rigorous review conducted on the paper by multiple experts – and believe me, it was rigorous – the information can be used to inform policy and management of this species, both here, and in other locations. Crab Team volunteers have a lot to be proud of. If you take a look at Figure 1 in the paper, reproduced here, you’ll see that every Crab Team site through 2016 is listed, and the sites with zeroes (in terms of European green crab – they certainly had plenty of other things to count!) were just as important as the sites where green crab were detected, because they give us some confidence in absence. Listing these zeroes is only possible because Crab Team volunteers survey very [very] consistently and we review data closely. The high quality of the data Crab Team volunteers collect increase their value to science and management, of green crab and the habitats they could impact.

We eagerly look forward to learning more about green crab and pocket estuaries from Crab Team data. As you might notice, with this paper on 2016 findings only now being published, the process almost always takes much longer than we would want it to. But that is because the process of publishing scientific literature is about establishing fact, and careful double checking is important at every step to make sure we represent observations of the natural world as accurately as possible.