Four European green crab were captured at Dungeness Spit in early April – the third location in inland Washington where green crab have been found. Since the initial discovery 10 weeks ago, staff and volunteers from US Fish and Wildlife Service (USFWS) and Washington Department of Fish & Wildlife personnel (WDFW) have been conducting intensive trapping and removal efforts in this newly-uncovered population. To date, 76 live green crab have been removed from the area (total effort of more than 2,100 trap sets). Unfortunately, this contrasts greatly from the finds at both of the other sites in Washington’s Salish Sea. The first detections were made in Westcott Bay (San Juan Island) and Padilla Bay (near Anacortes) late last summer, with very few additional individuals found during subsequent trapping efforts. Dungeness Spit has a much greater density of crab than either of the other two areas, heightening the need for aggressive trapping and removal efforts to reduce the chance that the population could become a permanent fixture in the area. 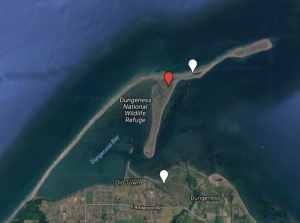 Crab Team sites surrounding Dungeness Bay. The two northern sites on Dungeness Spit are monitored by USFWS, while the southern site near Dungeness Landing park is monitored by Crab Team volunteers. The site marked in red is the location where European green crab have been captured. None have been found at either of the other two sites.

The initial capture of four crabs occurred on April 12, as part of regular, monthly Crab Team monitoring efforts. USFWS has been trapping for green crab in the refuge for more than a decade and joined Crab Team monitoring this year. In consultation with Crab Team staff, UWFWS moved their two monitoring sites slightly to more precisely target the type of habitat green crab appear to favor in our region. As part of their first sampling effort in April, volunteers and staff found the four crabs in traps at one of the two sites, in a marsh channel on Graveyard Spit, which is an offshoot of Dungeness Spit. In partnership with WDFW, and supported by advice from Crab Team, USFWS dramatically increased the number of traps set to remove as many crabs as possible. Crabs are primarily being captured in baited traps, though a few crabs have been nabbed by hand by monitors with eagle eyes (and heron speed!).

What do we know so far? 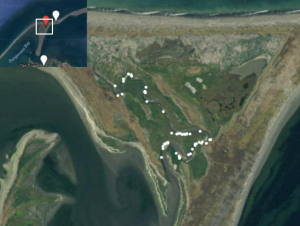 Though traps have been set widely at Graveyard Spit, green crab have only been captured in a single marsh channel (white dots). Click to enlarge.

What more do we want to learn? 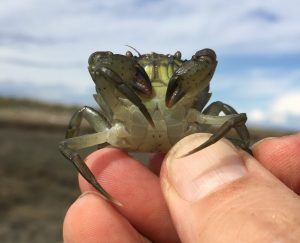 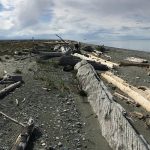 Graveyard Spit is remote and a UTV is required to get gear and people out to set traps. (Photo: Allen Pleus WDFW)

Ongoing trapping will be a critical part of managing green crab in Dungeness Bay. The intensive trapping efforts there continue to bring up a few green crab each week, although after more than two months there are some days where all the traps come up with only native critters in them – a potentially promising sign. As part of a National Wildlife Refuge, Graveyard spit is managed for the benefit of native wildlife, and managers have stated they will try to remove every green crab they can. Trapping, though resource-intensive, is the best tool we at the moment have to control this species. Current plans call for continued intensive trapping throughout the summer. In addition, Crab Team monitoring protocols are still being implemented monthly. Because this is the only Crab Team site where there is an appreciable number of green crab, this information could provide us with the first actual data on what green crab impacts are in our inland seas. We tend to reduce trapping during the winter, because it’s less effective at attracting crabs, during the colder months. But it’s likely that monitoring at Dungeness Spit will be ongoing for some time, as green crab larvae could get washed in again.

Preventing and managing biological invasions is similar to planning for a wildfire season: the best thing to do is prevent either invasions or wildfires from taking hold in the first place, but we know that some will occur despite our best efforts. It’s difficult to forecast exactly where, when, or how severe they will be when they do pop up, and yet it’s imperative to respond quickly and aggressively as soon as they are detected, and while they are still small. Early detection is the foundation of this process, and here we are fortunate to have so many volunteers, partners, and beachgoers as our “lookouts” for any smoldering green crab invasions. 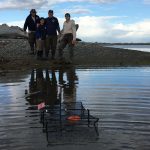