As we wrote last week, the first half of this monitoring season has seen several new detections of European green crab, but as green crab appear to be ramping up, so is the group of humans ready to control them. WSG Crab Team is now a project with five team members (including two full time staff), more than 200 volunteers, and 25 partner staff from agencies and tribes. That’s a lot of people who know how to search for and identify European green crab. But if we are to succeed in managing this globally-damaging invasive species, we will need even more.

In addition to implementing the early detection network, Crab Team can also contribute to the effort by helping build technical capacity to find and respond to green crab. One way we do this is by teaching as many beachgoers as possible how to be “eyes on the beach”, on the lookout for green crab in places we don’t have enough resources to monitor. We also provide training to managers – staff of federal and state agencies, and tribes. Because it’s their job to keep a close eye on shorelines all over Washington, they add another level of vigilance even if they aren’t setting traps. They also often spend time in places beachgoers don’t visit. 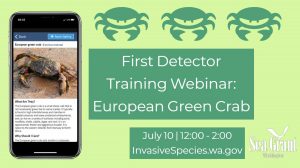 You can join our cadre of eyes on the beach by watching a webinar hosted by the Washington Invasive Species Council next week.

The detection last week of a European green crab molt in Fidalgo Bay, by Washington Department of Natural Resources Puget Sound Conservation Corps members is a great example of how working with agencies and tribes can expand the scope of early detection. Corps members were trained this March in Crab Team monitoring, and manage two Crab Team sites (Anderson and Cypress Islands). But they found the shell when they were in Fidalgo Bay Aquatic Reserve to conduct other monitoring.

Last week, we took an even bigger step toward dramatically increasing the scope of the green crab management effort across the Salish Sea. On sunny San Juan Island, we collaborated with managers from from Department of Fisheries and Oceans Canada (DFO) and Washington Department of Fish & Wildlife (WDFW) to workshop the details of where and how to trap for European green crab to increase the chances of finding them at times and places they are still extremely rare. Crab Team staff joined Patty Menning, an Aquatic Invasive Species Specialist for DFO, and Chelsey Buffington, a technician for WDFW devoted entirely to green crab management, at Friday Harbor Labs. Together, we spent two days looking at sites on maps and in the mud, and practicing monitoring protocols. Stakeholders in British Columbia are considering the implementation of a monitoring program similar to Crab Team, and WDFW will be expanding some trapping and monitoring efforts statewide, so this workshop had the chance to dramatically increase the scope of the green crab management effort within the Salish Sea. 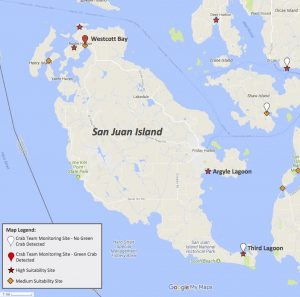 Map of sites on San Juan Island. Click to enlarge.

San Juan Island provided not only a beautiful backdrop for the two days of intensive field work, it also provided a great learning opportunity. Westcott Bay, a channeled marsh located on the northern end of the island, is the site where European green crab were detected in Washington’s inland waters for the very first time in 2016. Westcott Bay is also one of two regular monitoring sites on the island; Third Lagoon, an enclosed backwater lagoon located on the southern end of the island, is the second Crab Team site on the island. Finally, there are several other sites on the island that Crab Team has identified as potentially suitable habitat for green crab, but which are not regularly monitored. Visiting all of these allowed us to discuss the considerations that go into determining the best sites for monitoring, and gave us plenty of opportunity to get our boots into the mud!

On the first day, we set traps at Westcott Bay and Argyle Lagoon. Though not a current Crab Team monitoring site, Argyle Lagoon has been trapped as recently as 2016 by Sylvia Yamada, a green crab expert at Oregon State University, without finding any evidence of green crab presence. The site has habitat suitable for green crab, and given recent green crab detections at Westcott, we were eager to get traps in the water and see what critters we might find. A molt hunt at Argyle Lagoon uncovered 169 molts from five native species, but none from European green crab. The presence of the native species, particularly hairy shore crab, indicated to us that Argyle lagoon could also be suitable habitat for European green crab, as they tend to prefer similar habitat types. Retrieving the traps at Argyle Lagoon the following day proved to be relatively uneventful, as each trap came up with some combination of hairy shore crab and staghorn sculpin, in addition to a couple graceful crab and gunnels. From there, we drove north to Westcott Bay, where, unfortunately, two European green crab greeted us in the second minnow trap we retrieved. While there is no shortage of green crab in some of the areas in British Columbia where Patty works, finding two green crab at this site while they are still so rare in Washington’s inland waters certainly contributed to the learning experience of the trip. 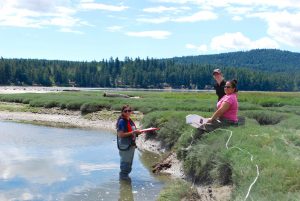 When a green crab was found during regular volunteer monitoring at Westcott Bay in 2016, a rapid assessment was conducted shortly afterward which turned up one additional green crab molt. Similarly, WDFW will be conducting another rapid assessment on north San Juan Island in the near future. The capture of these two green crab in Westcott Bay also comes amid a number of other recent green crab detections at both new sites and sites where they have been detected in previous years. While the discovery of these green crab is concerning, it reinforces the importance of Crab Team’s regular monitoring work, and the continued collaboration among, and commitment from, tribes, managers, beachgoers and everyone with an interest in preserving Salish Sea shorelines. It’s not something any one of the groups involved can do by themselves or in isolation. We are heartened by the increasing interest being shown in tackling this challenging crab as a team.