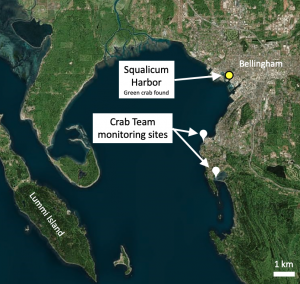 The remains of a European green crab were found in Squalicum Harbor in Bellingham earlier this week, the first evidence of the global invader confirmed in Whatcom County. Casey Pruett, director of the Marine Life Center, noticed a gull feeding on the carcass at the boat ramp immediately adjacent to the center, recognized it as a European green crab, and reported to Angela Foster, the on duty WDFW agent at the harbor. Most of the meat of the crab had been eaten, but based on shell size, it appears the crab was about 80mm (3 inches) across, a fairly large crab at least 2 or more years old. The remains of the crab will be returned to Crab Team researchers to collect tissue and other samples for study.

Though the crab was found in the harbor, it is not possible to know for sure where it was living before it became gull food. The gull might have captured it locally, or it could have been discarded by someone clearing out crab or shrimp pots. Because marinas are often home to large adult Dungeness and rock crabs, which are good competitors and even predators of green crab, they are not the best habitat for green crabs. In our region, green crab tend to do best in very muddy isolated habitats, such as saltwater lagoons, pocket estuaries and salt marshes. If green crab become abundant enough elsewhere, however, some population spillover could occur into habitats like marinas where they have lower survivorship. Casey Pruett adds that she sets traps off the dock nearby to demonstrate crabbing practices to visitors, and has never captured a green crab, or observed one on nearby beaches or shorelines. Alternatively, a crabber or shrimper may have unintentionally captured the crab elsewhere and discarded it at the dock, where it was discovered by the gull.

As with all new detection locations, Washington Department of Fish and Wildlife will investigate further by setting a large number of traps in the area, to try to learn whether there are more green crab in the marina or nearby. WSG Crab Team has three early detection monitoring sites in Whatcom County that have been monitored for the last three years, the closest of which is at Post Point, about 2.5 miles to the south of Squalicum Harbor. No evidence of green crab has been detected at any of those locations or reported anywhere else in the county.

Gulls are one of a few local animals that could prey on European green crab, including larger crabs, otters, raccoons, herons, and sculpin. In 2017, monitors in Padilla Bay found a green crab that had probably been eaten by a river otter. While native species can sometimes help reduce the number of an invasive species, they are rarely able to eradicate a population entirely. Often the invasive can find a refuge, a niche in the region where they are relatively protected from potential predators. Ultimately, native species will still need help from humans if we are to reduce or prevent harm to local habitats and shellfish that could be caused by green crab. If you’re interested in learning how you can help, check out “How to Get Your Eyes on the Beach Like a Pro“.