Early detection is one of the best ways to thwart an invasive species, but trying to find some of the first individuals to arrive in a new habitat is no easy task. WSG Crab Team built a monitoring network to meet this challenge: by using multiple search methods and finely tuning the search protocols for green crabs, we hope to be able to uncover evidence of green crabs even while they are still extremely rare. Early detection successes have been possible thanks to the enormous commitment of hundreds of volunteers and partner staff who are willing to do the literal dirty work of getting down in the mud to where green crabs are. But even with all these boots in the mud, Crab Team can’t monitor all 2,500+ miles of shoreline along inland Washington, raising the question of whether other tools might help fill the gaps. One such technology that is increasingly used in conservation efforts is environmental DNA (eDNA). 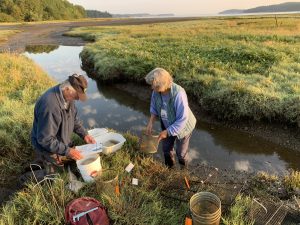 Crab Team has been interested in whether eDNA could be a valuable tool in the management tool kit. While eDNA has been used to detect other invasive and rare species, use for green crab is still in development. Through a WSG-funded project, Crab Team is collaborating with WDFW and other UW researchers to develop an eDNA assay and help integrate it into management. Over a series of several blog posts, we will share the motivation and results of this project.

Environmental DNA, or eDNA, sounds a bit like magic. Instead of trying to observe a plant or animal directly, we try to find their DNA in the environment. Organisms release DNA into the environment in the forms of mucus, skin, hair, etc. For example, fish slough mucus as they move through the environment, and whales lose skin cells just like we do. Even plankton and microbes have DNA we can find. Because DNA itself is tiny, we can find DNA from millions of organisms in just a single bottle of water. The applications are broad but eDNA projects generally fall into two categories: biodiversity surveys, which try to learn a little bit about everything in the environment (tracking biodiversity, assessing community level responses to climate change), and targeted searches, which try to learn a lot about one thing (tracking rare, endangered*, or invasive species). The latter approach is one we could imagine working for green crab. In this case, you can think of eDNA as a finely tuned metal detector – we dial in our search based on the known genetic sequences of European green crab.

How does one do eDNA?

eDNA is an appealing detection tool because it can often enable larger scale sampling efforts than other “traditional” methods, like trapping.

Collect water in a sterile bottle. That’s basically it, and the simplicity of this step is one of the reasons that eDNA is gaining popularity. It doesn’t take a lot of special equipment or training to collect the samples, so sample effort can be larger. 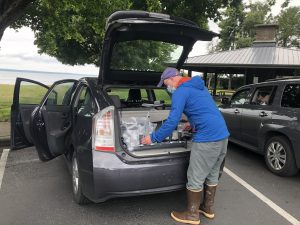 Yes, rigorous science can happen in the trunk of a Prius! The team adaptively managed field work during the pandemic to get high quality data.

Step 2: Extract all the DNA from the sample

DNA can break down quickly, so it needs to be preserved for analysis. A vacuum pump draws the water sample through a filter, capturing cells containing any DNA in the water. The filter is then preserved in a buffer solution that keeps the DNA in good condition until it can be processed in the lab. Ideally, this step is done as soon as possible after the sample is collected. In the field, researchers might come up with creative “mobile lab units” to filter water fresh from the site, but water can also be chilled or frozen then brought back to a lab for filtration.

Step 3: Search for the right DNA

A series of chemical reactions releases the DNA from the cells captured by the filter, and the soup of genetic material is ready for investigation. A common analysis method for eDNA that has been used for green crab assays is quantitative polymerase chain reaction (qPCR). The DNA sample undergoes a chemical reaction that uses a special fragment of genetic material called a primer that binds specifically to green crab DNA. If the primer finds a match amidst all the pieces of DNA in the sample, the other components of the chemical reaction make millions of copies of the matched green crab DNA. This step is called amplification, because it’s essentially turning up the volume on green crab, making their genetic signal detectable among the many other non-green crab DNA pieces in the sample. A machine is then used to detect these copies, and if it does, will report back a positive test for the target organism.

Why wouldn’t everyone use eDNA?

So eDNA is as easy as 1-2-3, right? Well, yes… and there are a few other details to be worked out so that an eDNA protocol is a useful conservation tool. Some of these details are technical. For instance, even though sample collection is fairly straightforward, some steps in developing eDNA protocols are inherently technical, and require specialized equipment or expertise. For example, prior to collecting water samples, researchers have to determine which primers are best to answer their questions. For a targeted search, it’s necessary to identify a primer that will detect all individual green crabs, but only green crab.

As eDNA technology develops, these technical issues are increasingly easy to anticipate and work through. But primers, assays, and protocols aside, a bigger question looms for many managers: how to interpret results and what to do with that information. In the next post in this series, we’ll talk about why this is a barrier to the adoption of eDNA as a conservation tool, and what we can learn from history that might help us overcome it.

– Emily Grason and Justine Jadallah
Justine Jadallah is a senior in the UW Program on the Environment capstone program and guest co-authors this blog post series as part of her project to investigate barriers to the adoption of eDNA as a management tool.

* While we try to link you directly to the research we reference, some of the studies cited in this article are not open access. If you have any questions about any of the works cited here, please feel free to reach out to crabteam@uw.edu.