This is the second in a series of posts sharing new research on the use of environmental DNA (eDNA) in detection of green crabs. For our introduction to eDNA, check out the previous post. 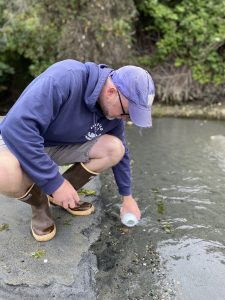 Collaborator Ryan Kelly shows just how easy sample collection is for eDNA assays at a site on Vashon Island in 2021.

As a detection tool, the process of sampling eDNA is relatively simple, but interpreting results can actually be more complicated than you might expect. While the laboratory process and equipment might tell you – within some window of tolerance – whether green crab DNA was present in a given water sample, interpretation of results can yield some surprising conundrums. Similar to trapping, eDNA sampling operates based on probability, i.e., the chance of detecting a rare event. The ocean dilutes all the DNA being shed by the organisms living there. So, just as Crab Team monitors set traps at the same spot, and each trap catches a different combination of organisms, bottles of water collected at the same site and time may yield different eDNA results. How do we interpret different results from the same time and place? Or, what if eDNA results conflict with findings from trapping surveys?

This last question offers one of the most significant barriers to incorporating eDNA into invasive species management. Managers need to make informed decisions about how to allocate limited resources. So, when results from different search techniques differ, it creates some uncertainty about what’s really going on in the environment, and therefore what to do about it. How should we assess this uncertainty and weigh it against what could happen if nothing is done? Many people responsible for making decisions about management of invasive species say this question can make them cautious about using eDNA to search for invasive species – and not without reason. The story of one of the first uses of eDNA in invasive species management, to detect invasive carps, demonstrates how uncertainty can be costly in more ways than one.

Invasive carps (more specifically bigheaded and silver carp) have been spreading throughout the US via river systems since accidentally being released into the wild in the 1960’s. Their spread up the Mississippi River Basin and toward the Great Lakes threaten an important source of drinking water and home to many productive wetlands, a source of more than 1.5 million jobs, that generates over $52 billion annually in recreational activities.

In 2009, a positive detection of carp eDNA in Lake Michigan, beyond the electric fence barriers constructed to prevent their upstream spread ignited a controversy that still resonates with many invasive species managers. Following the eDNA detection, managers conducted wide scale searches with other sampling techniques. Some of the search techniques used resulted in mortality of native fish. Harm to native species and habitats can be an unfortunate side effect of some control measures and has to be weighed against the threat of invasion that could result from inaction. In this case, all of these efforts failed to find any actual carp specimens, leading many to doubt the accuracy of the eDNA detections. Yet, as has been noted, because some eDNA assays can be more sensitive than their traditional capture-based detection method counterparts, failing to find carp does not necessarily mean they weren’t present – they may have been too rare to be captured by even such an extensive capture-based search effort. ​​More than eight months later a carp was captured in Lake Michigan, partially validating the accuracy of eDNA. But debate continued, even in the courts, over whether the DNA had gotten into Lake Michigan by means other than fish migration across the electric fence barrier. That is, even though the eDNA evidence was likely accurate, it didn’t provide a clear answer of what the appropriate corrective action would be. Like any other detection tool, eDNA did not tell managers how carp might have gotten into Lake Michigan, and how to prevent that from continuing to happen. 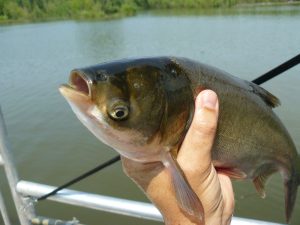 A carp in the hand is worth … how many positive eDNA detections? Photo: NOAA Great Lakes Environmental Research Laboratory, CC BY-SA 2.0, via Wikimedia Commons

eDNA continues to be used to monitor for invasive carps in the Great Lakes, and so far, more than a decade after the controversy, carps don’t appear to have established large populations in the lakes. However, as one of the earliest uses of eDNA in invasion management, the story of carp carries a lot of weight with managers and with the public. Skepticism remains, first that eDNA provides accurate information about the environment – i.e., was there truly carp DNA in the sample? For most people, it’s just more difficult to trust that the chemicals, buffers, reagents and machines are telling us what we think they are, than it is to trust a fish in their hands. The technology of eDNA continues to stand up to challenges, however, and the discipline is always developing best practices to ensure reliability.

But a second, trickier, question also remains: what do we do with eDNA evidence, particularly when it conflicts with information from other sampling techniques? There is no simple technical solution to this question, and management decisions still require risk analysis and expert judgment to weigh all of the evidence, along with the costs of management intervention, against the potential costs of inaction.

Is green crab eDNA sampling on the horizon for Crab Team?

The potential elegance and power of eDNA makes it extremely appealing as a management tool for invasions, and indeed it has great potential to increase the scope early detection of green crabs – if we can better understand the uncertainty inherent in the process. Could a program like Crab Team benefit from adding eDNA to the early detection toolkit similar to other citizen science programs? Or, could this technology have additional benefit in other early detection or monitoring efforts, like those in Alaska, where the sheer vastness and remoteness of suitable habitat makes traditional sampling extremely difficult? How can we avoid repeating past experiences of costly uncertainty?

With this background, the green crab eDNA project aimed to address these questions, and over the next posts, we will introduce you to the researchers, highlight results from the project, and share a story of discovery, as the project team uncovered our own case study of detection uncertainty.

– Emily Grason and Justine Jadallah
Justine Jadallah is a senior in the UW Program on the Environment capstone program and guest co-authors this blog post series as part of her project to investigate barriers to the adoption of eDNA as a management tool.