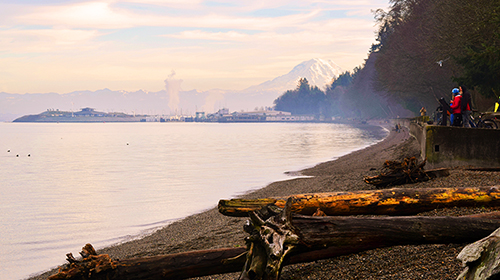 Owen Beach, located in Point Defiance Park, is a popular area for many communities in Tacoma, providing beach access for boaters, swimmers and kayakers, and a space for public events. A few years ago, city planners recognized that the site was regularly experiencing erosion and flooding. They knew that as the seas continue to rise due to climate change, these events will become more frequent. Something needed to change.

Enter the Washington Coastal Resilience Project (WCRP). Led by Washington Sea Grant (WSG) and funded by the NOAA Regional Coastal Resilience Grants Program, the three-year effort aimed to rapidly increase the capacity of Washington state communities to prepare for natural hazards, such as the erosion and flooding that Owen Beach was experiencing. Since the project launched in 2017, the WCRP team has improved risk projections, provided better guidance for land-use planners, strengthened capital investment programs for coastal restoration and infrastructure, and made critical information easier for everyone to access. Now, the project is wrapping up; yet, WCRP’s end is really just the beginning, as communities across coastal Washington are continuing to use the tools and information that resulted from the project, helping them to prepare and become more resilient.

WCRP was a close collaboration among WSG, the Washington State Department of Ecology, UW’s Climate Impacts Group (CIG) and The Nature Conservancy, plus ten additional partners. “We are also indebted to the NOAA Office for Coastal Management West Coast Region, which provided valuable technical and administrative advice to the project team,” says Paul Dye, project lead and WSG program strategist. In 2019, the UW recognized the efforts of the WCRP team by awarding them with the College of the Environment Community Impact Award.

Owen Beach Park is a prime example of the project’s community impact. In 2017, Marty Stump, Metro Park Tacoma’s deputy director of planning and development and consultants from SiteWorkshop approached the WCRP team about the deteriorating site. Metro Park had received a grant to restore and rebuild the park, and Stump wanted to consider sea level rise in their planning process so the park could be functional for another 100 years.

Nicole Faghin, coastal management specialist at WSG, worked closely with Metro Park’s staff, drawing upon the many tools and data produced by the WCRP team to incorporate the best science available on sea level rise. Stump says they learned much from Faghin about storm surge, wave impacts, and particularly sea level rise probabilities. “The sea level rise planning we did with Washington Sea Grant and the WCRP team elevated the conversation around resilience and sustainability—and reset our plans for an entire park,” Stump says.

Working on Owen Beach with Metro Park Tacoma was just one example of WCRP’s many community efforts. “WCRP was one of the largest state-wide projects for WSG in the past four years, and remarkable for the large number of partners that collaborated, many for the first time,” Dye says.

WCRP produced a number of publications and online content to make it easier for coastal communities in Washington to incorporate sea-level rise considerations in their policies, plans and development projects. This included a major new assessment of sea level rise led by WSG’s Ian Miller and CIG’s Guillaume Mauger. This assessment, for the first time, integrated vertical land motion into sea level projections for all of Washington’s shorelines. The team also published Extreme Coastal Water Levels in Washington State: Guidelines to Support Sea Level Rise Planning, which provided further guidance for planners and engineers addressing critical infrastructure and community safety concerns, and a variety of “how to” guides for implementing the data. These and other useful documents are available on the Washington Coastal Hazards Resilience Network’s newly designed website.

Today, local jurisdictions are continuing to incorporate these WCRP materials into coastal planning projects, including the state’s largest county. King County recently attributed WCRP’s work with helping in the development of regulations related to sea level rise for its Comprehensive Plan. The WCRP team also recently assisted the Island County Planning Department with developing a strategy for addressing sea level rise in the county’s shoreline masterprogram and a framework for community-based resilience planning.

As for Tacoma’s Owen Beach, Stump points out, “The park is seen as a place that the City is willing to invest in for the future, our future. And, although it took longer to plan (because of added sea level rise considerations}, at the end of the day, the construction costs will not result in increases. In fact, we are adding green spaces that are less expensive to build than hard cement structures, plus they are more aesthetically pleasing.”

The three-year WCRP grant was the appetizer to what will be a full menu of programs led by WSG over the next few years to address coastal resilience in Washington state. “Among the ideas in the works are a dedicated staff person on the coast working on coastal resilience projects, a multi-year resilience package proposed to the State Legislature, and a plethora of projects along the coast that support this vision into the future,” says Russell Callender, WSG director. “This grant is just the first stepping-stone in a series of coastal hazard resilience efforts with partners at UW Climate Impacts Group and Washington State Department of Ecology.”

The WCRP effort has set the bar high, enhancing resilience to coastal hazards by improving the coordination of research, outreach and technical support in Washington state.

That is good news for shoreline sites in Washington. Thanks to the WCRP team, those communities now have guides and examples to follow. As Stump says, “This winter, Owen Beach will become a more resilient space, as well as a more sustainable, natural park, which will serve as a model for 100 years to come.”