Who Brings Your Seafood to You? An Interview with Mike Cornman of Westport Seafood 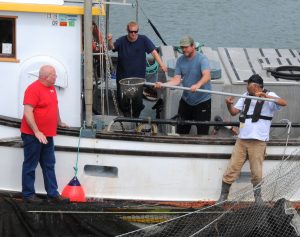 Mike Cornman, owner of Westport Seafood and Merino’s Seafood Market, was destined to work a career connected to the ocean. Cornman grew up in Westport, Washington — which at one point was known as the salmon capital of the world — and spent his summers working in his family’s fishing business that opened in 1985. While he left for several years to start his career in the restaurant industry, as his parents got older Cornman moved back to Westport to help with the family business. What started as a fishing operation evolved as Cornman expanded Westport Seafood and delved into new business ventures.

Westport Seafood is a unique operation, composed of several fisheries that showcase the beautiful and sustainable flavors of West Coast seafood. Their three main fisheries include albacore tuna, Dungeness crab and anchovies, each of which fulfill a unique role for their business. Westport Seafood operates several landing stations and processing facilities with a fleet of 30 plus boats during peak season. They operate a landing station for tuna, and their anchovy fishery supports their albacore tuna fisheries as they hold the anchovies in live pens for fisherman to resupply when they come to shore. They also sell some of their anchovies as bait to sportfishers. In addition to these three fisheries, Cornman purchased Merino’s Seafood Market six year ago. Merino’s was an established seafood market and micro-cannery within Westport. When Cornman purchased it, he expanded their offerings by including online sales that showcased canned albacore tuna, salmon and oysters. Their online offerings were a huge success, allowing Cornman to address the question often asked in Westport: ”Where is the nearest seafood restaurant?”

After Cornman purchased Merino’s, he decided it was time to venture back into the restaurant business. In 2021, Cornman opened a fish and chips window attached to Merino’s Seafood Market. What started as a takeout window has since expanded to include an upstairs dining area and bar in the cannery. The restaurant was created to cater to the tourism industry during the summer months, providing the flavors of Washington seafood to visitors from all around the country. However, as the tourism industry is the most busy five or six months out of the year, many eateries close in the winter months; Cornman wanted Merino’s to be accessible to residents and tourists alike all year round. Merino’s specializes in fish and chips, with lingcod, rockfish, salmon, halibut and tuna caught from local fishers within the community. Some other top sellers from their menu include their seafood melts, Dungeness crabs, and chowder poutine. Merino’s commitment to selling sustainable and local seafood is evident, and their operations have been featured in King 5 and Positively Groundfish, a nonprofit emphasizing sustainable seafood. Having visited their restaurant recently, I can personally attest to their delicious fish and chips baskets, warm atmosphere, and love of the seafood industry! 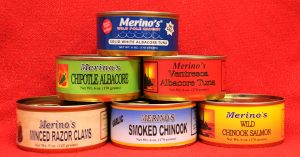 “I love being able to share fresh seafood with people from all over the country,” Cornman says. His passion for local seafood stems from his upbringing on the coast, fishing and tasting the beautiful and fresh catches from Washington waters. When Corman first purchased Merino’s seafood market and cannery, he went online with their canned albacore to grow their presence. Additionally, he traveled to holiday shows around the Pacific Northwest, Utah and Colorado. Through these experiences, he has been able to change people’s perception of what canned fish tastes like. He has garnered so much support from his freshly caught and canned tuna, seeing incredible support and growth in his sales each year. When the pandemic hit, Cornman continued to see an increase in sales, especially on their website where people could order freshly canned fish to their door. Their restaurant was also able to thrive during the pandemic given the outdoor seating and take out window. Despite the challenges that can come with owning multiple businesses, Cornman loves this job because he feels he works in a people’s industry rather than the seafood industry. From working with fishers, managing his staff at the restaurant, and connecting with the public as they try Westport Seafood products, Cornman believes his products are great because he works with great people.

As Cornman continues to shape Westport Seafood’s goals for the future, his priority is to continue striving for sustainable seafood. In Cornman’s opinion, this includes using the most ethical and sustainable method for each of his three fisheries. “the future of seafood includes having all stakeholders, fishers, environmentalists, scientists and Indigenous co-managers at the table,” he says. For fishers to have something to catch, they only harvest what is available. In doing so, Westport Seafood is ensuring that breeding stocks are maintained for future generations to come, providing security and resiliency to local economies, food webs, and ecosystems as a whole.