Trapping to remove invasive European green crab from Dungeness Spit National Wildlife Refuge is in its 15th week since the initial discovery of four individuals during April of this year. As of last Friday, partners with US Fish and Wildlife Service (UWFWS) and Washington Department of Fish & Wildlife (WDFW) had captured and removed 89 crabs from Dungeness Bay. Since our last update a few weeks ago, a few notable developments have occurred:

We combine these observations with data on the crabs that are being found, such as the ratio of males to females, and the average size of crabs being caught, to keep an eye on what is happening in the life cycle of green crab and develop best practices for effective removal. 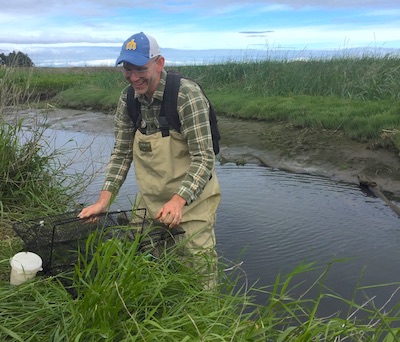 In addition, over the past months, the search area around Dungeness Spit has widened, to explore whether European green crab are also living in other nearby habitats. Because Graveyard Spit is rarely visited by humans or vessel traffic, the most likely explanation for how green crab arrived there is that they washed in as larvae. Any larvae that came that far into Dungeness Bay could have washed past, and landed in, other sites with good green crab habitat. To address this concern, multiple partners have been trapping along neighboring muddy shorelines considered to be favorable for green crab survival.

Unsuccessful searches like these are our favorites. Yet there remains a western frontier to our knowledge – no systematic search for green crab has been done west of Dungeness Spit in the past several years. Some preliminary oceanographic models suggest that the western end of the Strait could be more likely to receive any larvae that are getting washed out of Sooke Inlet, a known population just west of Victoria, BC. The good news is that only a very small proportion of the shoreline offers the best habitat for green crab. While larvae could arrive anywhere the current takes them, we don’t expect green crab to thrive, and have a big impact, in rocky or high energy beaches.

We are excited to partner with the Lower Elwha Klallam Tribe to launch one or two new early detection sites in the Crab Team network in the coming weeks. Not only will this expand the coverage of the early detection network, but the staff will also be able to recognize green crab in their field work at other sites, and can therefore act as eyes on the beach in locations that aren’t as suitable for early detection trapping, like the mouth of the Elwha River. This week we selected a first site at the Pysht estuary, and although we haven’t trapped there yet, we noted abundant hairy shore crab and juvenile Dungeness crab in the channel, and no evidence of European green crab.

Does 89 crabs mean it’s already too late to do anything about this invasive species? We don’t think so. Prevention is, of course, the best and most cost effective way to protect native habitats, but, even in the best of cases, it’s unrealistic to expect that we can prevent every single tiny larva from floating in. The current partnership among agencies, tribes, scientists, and shoreline stewards for early detection of green crab and rapid removal efforts, is a powerful second line of defense. Putting the numbers in perspective, at Dungeness Bay, it took more than 3,000 traps to catch the 89 crabs – an average of 0.03 crabs per trap set. The most recent surveys in Sooke Basin during 2015 averaged 1,000 times as many crabs! But certainly, if we did nothing to remove the crabs form Dungeness Bay, 89 could easily become hundreds or thousands very quickly. Complete eradication is a lofty goal, and experience in invasion management has demonstrated that it can be hard to achieve. Yet protecting Washington’s shorelines and economies will require management for this globally damaging species, and it is far easier and more cost effective to do so when they are relatively scarce.