Working Together to Monitor Dungeness Crab 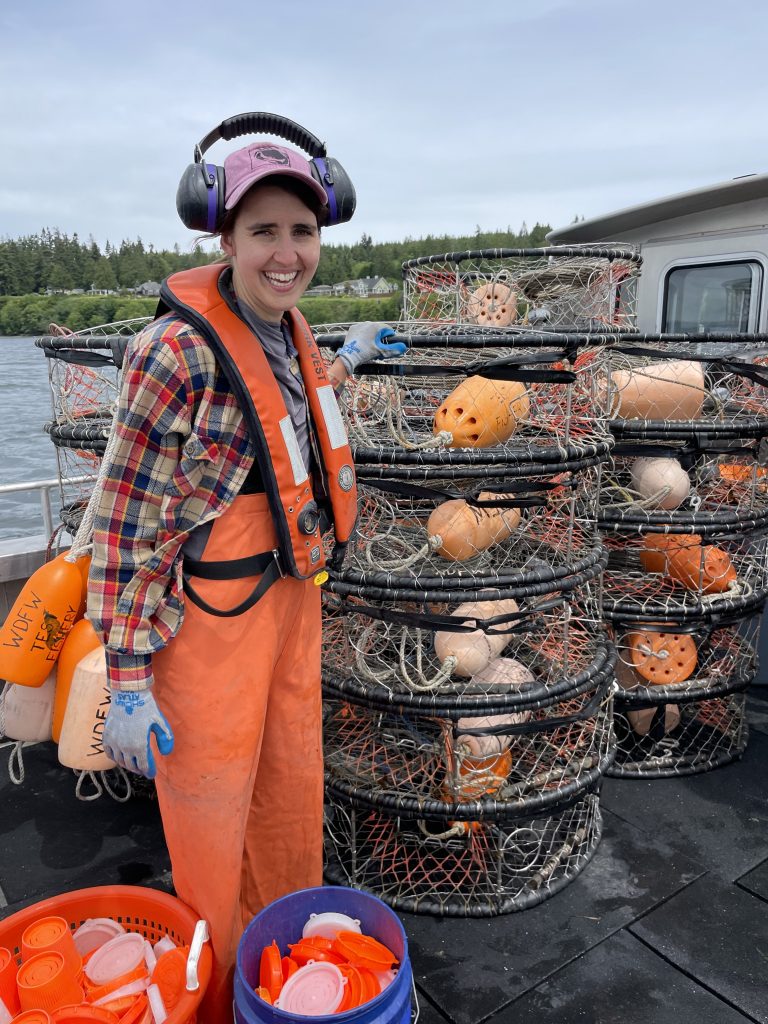 “Male Dungeness, 173, 1-2!” After calling out the specs, Emily Buckner — the program coordinator for the Pacific Northwest Crab Research Group (PCRG) — swiftly tosses the wriggling crab overboard and then reaches back into the pot to pull out another. Today, Buckner’s job entails going out with a small team on a Washington Department of Fish and Wildlife research vessel to survey the adult crab population in Hood Canal ahead of the recreational crabbing season. For each crab that they catch, the researchers use visual cues to identify the animal’s gender and species; a caliper to measure the length of the carapace (in millimeters); and then work their fingers underneath the animal’s clawed arm to gently pinch its shell to determine hardness. The hardness measurement that Emily just called out, 1-2, represents the ideal condition for harvest with a clean and fully hardened shell. A  measurement of 1-1 would denote that it’s preparing to molt while a measurement of 3-1 would mean that the shell is very soft, meaning that the crab had molted recently and would not be suitable as a “keeper.”

Despite the fact that Dungeness crab is the most profitable commercial fishery in Washington,

until recently there has been no coordinated effort to understand the species’ behaviors and population patterns across the state. Management of the fishery is based on the catch rates from previous seasons — methodology that uses only a single data source — and is shared between multiple state and tribal agencies. Recognizing the knowledge gaps and the number of actors involved in the fishery, in 2018 a consortium of scientists, resource managers and community members formed PCRG, aimed at bringing groups together in a collaborative research effort. Given that its participants come from many different organizations, PCRG saw the importance of having someone at the center of it all to facilitate coordination and planning — Buckner now serves in this role, as PCRG’s sole official staff member.

In this position, Buckner facilitates PCRG’s goal — to address critical data gaps to promote and support the sustainable management and harvest of Dungeness crab — by coordinating activities, such as writing proposals and standardizing data collection methods. Washington Sea Grant (WSG) has been behind Buckner’s involvement with PCRG from the beginning. In fact, she first worked for the organization as a 2020 WSG Hershman Fellow. Over the course of her Hershman Fellowship, Buckner researched what characteristics were key to other successful collaborations similar to PCRG. “One of the key recommendations I found was having a central node to keep people on task,” Buckner explains.

Of course, it’s the science itself has also held the group together. WDFW has been conducting pre-season crab surveys, such as the ones in which Buckner participates, for decades and tribes that manage Dungeness fisheries also conduct their own ongoing pre-season surveys. However, each group conducts these in slightly different fashions, meaning that it’s difficult to draw big-picture conclusions from the widely varying data collected. “One of our hopes is that we can get all of the co-managers to do similar types of surveys,” Buckner says. “We’re trying to create more collaborative datasets that are using a standardized method.”

PCRG also aims to collect standardized data earlier in the crab life cycle. Buckner coordinates a statewide larval crab study with participants across Puget Sound and coastal Washington using “light traps” — contraptions that use light to attract and then trap organisms. PCRG is currently focused on using the traps to estimate the number of Dungeness megalope, which is one of the crab’s early life stages. 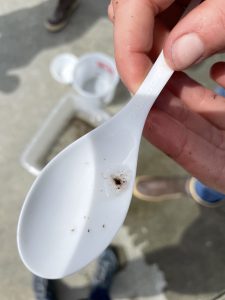 A Dungeness crab in the megalope phase.

For example, the Port Gamble S’Klallam Tribe collects larval data in north Hood Canal. After having spent the morning surveying the adult crabs on the WDFW boat, Buckner heads over to the Port Gamble S’Klallam Tribe’s site to see the day’s light trap catch. The researchers pull the contraption out of the water and begin to sort the peppercorn-sized creatures within. “It can be pretty time-consuming if there are a lot of megalope in there,” says Jason Haveman, the shellfish program manager for the Tribe. During the height of the season, there can be as many as 2,500 megalope within this one trap. Today, the count is 155.

It will take these megalope about four years to grow to a size big enough to be caught and kept by a crab fisher. Eventually, collecting this larval data may help the crab fishery managers prepare for what’s to come. “If there’s a year with low larval supply, that could be bad for future adult abundance — the goal is that we would be able to give fishermen a heads up,” Buckner says.

Commercial crabbers in Washington have been caught off guard by changes to the Dungeness populations over the last couple of decades. “The Hood Canal Dungeness population has experienced some big swings — boom and bust cycles — but we don’t know why,” Havemen says.

In south Puget Sound, the Dungeness fishery has been closed since 2018 due to low population numbers. “The decline in crab in south Sound really worries people. It was a big motivator for starting PCRG,” Buckner says. “We want to be able to understand and anticipate.”

Washington Sea Grant, based at the University of Washington, helps people and marine life thrive through research, technical expertise and education supporting the responsible use and conservation of coastal ecosystems. The National Sea Grant College Program is part of the National Oceanic and Atmospheric Administration, U.S. Department of Commerce.
wsg.uw.edu