As Crab Team’s Coastal Specialist, Alex is responsible for trapping invasive European green crab on the Washington coast. Alex works with coastal partners to coordinate efforts to detect and control the spread of green crab. Her work is a blend of many things including field work, data analysis, mapping, and outreach to coastal communities and partners including Tribes, shellfish growers, and agency representatives. At WSG, Alex is an active member of the Diversity, Equity and Inclusion (DEI) workgroup.

Prior to joining Crab Team, Alex worked for WSG in two other capacities: First as a student researcher while in graduate school at UW, and later as a Shellfish Aquaculture Specialist. Her previous work concentrated on the Washington Coast Shellfish Aquaculture Study (WCSAS), where she served as the programmatic lead and as the lead author on a science synthesis report focused largely on intertidal ecology in Willapa Bay and Grays Harbor.

Alex is originally from Boston, MA which is where her love of the coast, ocean, and seafood first began. She holds a bachelor’s degree in Organismic and Evolutionary Biology from Harvard University, a master’s degree from the School of Marine and Environmental Affairs at UW, and a Graduate Certificate in Climate Science from UW’s Program on Climate Change. 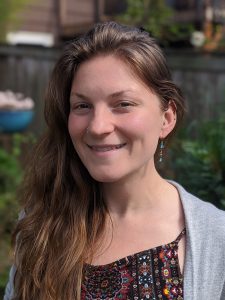