Padilla Bay: In It For The Long Haul

August 30 of this year will mark the fifth anniversary of the first confirmed detection of invasive European green crab along the inland shorelines of Washington which occurred on San Juan Island. Three weeks later, the region will hit the same milestone for the second confirmed detection: Padilla Bay, near Mt. Vernon.

As home to a National Estuarine Research Reserve (NERR), Padilla Bay is one of the most intensively monitored sites across the Salish Sea. Not only does it have the highest density of Crab Team monitoring sites across the network (five in a single estuary), but a myriad of other research projects have staff, students, interns, and volunteers scattered across the mud, sand, eelgrass and water of Padilla Bay nearly year round. With so many eyes out there, what has been learned about green crab presence and what might we expect going forward? 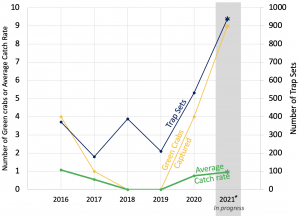 European green crab captures, average capture rates (number of crabs per 100 trap sets), and trapping effort (number of trap sets) in Padilla Bay, each year since green crabs were first detected there. Note 2021 data is incomplete as season was still in progress at time of publication. Click to enlarge.

Padilla Bay over the last five years forms the impression of a site at the early stages of an invasion. When invasions start, the abundance of the invader may be extremely low, and even undetectable at times. But slowly, often very slowly at first, numbers creep up, and detections become more widespread. The spatial and temporal gaps that initially appeared between sightings start to fill in, and captures are more expected, less of a surprise.

This pattern is consistent with observations over the last year in Padilla Bay (see fig). Of the 18 crabs that have been trapped in Padilla Bay since 2016, 13 were captured in the last 12 months. Late last year, just a few young crabs were found in traps toward the end of the season, but this year, captures started earlier in the season, and mostly consist of larger crabs. 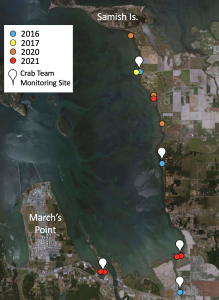 Map of Padilla Bay European green crab capture locations, color coded by year. White flags denote locations of regular monitoring sites, but trapping has occurred across much of the shoreline of Padilla Bay since 2016. Click to enlarge.

Also new this year, green crabs were found west of the Swinomish Channel for the first time, in the marsh near the Swinomish Casino (see Map). Since 2017, this site has been surveyed every month of the trapping seasons by Crab Team volunteers. They have met the challenges of this exceptionally sticky muddy site, the finicky tides, and even of the pandemic, so it’s an understatement to say they are seasoned mudders. Notwithstanding all that experience, they found themselves in uncharted territory in July when, for the first time, they pulled up two green crabs during their regular survey.

Scott Peterson described the team’s experience of actually finding the thing they had spent years looking very hard for yet hoping not to find as a process: “As soon as we dumped the contents of the trap in the bin we saw the strange crabs and struggled with the possibility that we had two adult green crabs…Some of us realized it right away, and others went through some progression of denial through to acceptance.”

The two crabs came back to UW campus to contribute to several ongoing research projects, including genetics work. The Swinomish Indian Tribal Community leapt into action, reaching out to their fishing community to ask them to be on the lookout. In the weeks following, staff and interns from the Padilla Bay NERR set 130 traps over several nights in the marsh, and captured only one additional crab. It’s a relief not to find more, but it highlights the need to keep a close eye on this site. 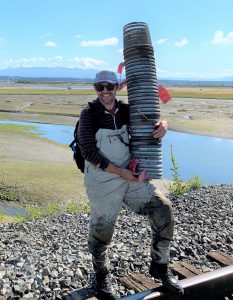 Heath Bohlman, researcher at PBNERR, carries a stack of minnows back to shore after the Swinomish Casino marsh response trapping. Photo: Roger Fuller/PBNERR

While the average catch rate so far this year is similar to last year’s, what concerns managers is what could happen next if the invasion picks up speed. Though early numbers typically increase slowly during an invasion, the pace of population growth can accelerate rapidly, for instance, as it becomes easier for crabs to find a mate with even a small increase in density. That’s one reason why trapping and removal can have the biggest benefit when there are actually very few crabs to catch.

The stakes are high in Padilla Bay. Its 8,000 acre bed of eelgrass is not only a critical ecological resource and a natural laboratory for understanding the function of protected areas, but also a vision for how eelgrass protection and restoration could transform the Salish Sea. A dense invasion would threaten this bed – the largest in the lower 48 – and all that rely on it. For the time being, however, green crabs are sticking to the shoreline, the team at the NERR has yet to find any in the eelgrass beds. Though eelgrass is suitable habitat for green crabs, it’s possible that they first need to become abundant in the more protected higher shoreline areas, to sustain populations in deeper waters where they may encounter more predators.

But Padilla Bay has a lot of staunch defenders. The combined contributions of the Swinomish Indian Tribal Community, Crab Team volunteers, and the Padilla Bay NERR have all been needed to paint this detailed picture of green crab, and to detect and respond to the new sighting at the casino marsh. 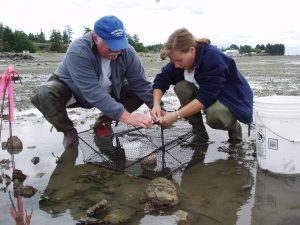 From the archives: PB NERR staff and volunteer conducting green crab monitoring in 2009. Padilla Bay was one of a very few places monitored continuously since the early 2000’s. Photo: Sharon Riggs/PBNERR

The NERR considerably expands the scope of green crab efforts in this estuary, with the number of eyes, hands, and boots dedicated to monitoring and stewarding Padilla Bay’s resources for the long haul. This year, monitoring is supported by eight interns, three AmeriCorps volunteers, and several research and stewardship staff. Many trainees go on to peruse environmental careers, and so their experience in green crab management also contributes to expanding regional capacity. A case in point is Lindsey Parker, who got her start green crab trapping at the NERR in 2017, and who now works for WDFW to coordinate the Drayton Harbor removal trapping. And while the green crab efforts at the NERR are larger than they have ever been, they are also some of the longest-running ones in the Salish Sea. In fact, in addition to being the 5th anniversary of capturing the first crabs, this year also marks the 20th anniversary of green crab monitoring at Padilla Bay. This dates to the initial alarm raised when green crab first arrived in Washington’s coastal estuaries in the late 1990’s. Early detection and response to invasion, along with a formidable set of baseline data on native species with which to gauge impacts, are legacies of a long-term, place-based stewardship research program.

With captures increasingly common across the Salish Sea, Padilla Bay could be a microcosm of green crab trends in the region, and so successful management will undoubtedly depend on building more capacity to collaborate and cooperate in the collective response.

The crew of Crab Team volunteers that samples Swinomish Casino marsh in April 2021.