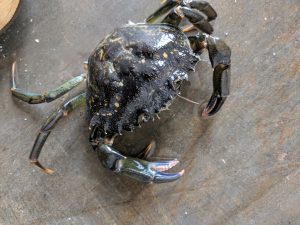 Growers working with Taylor Shellfish captured a female European green crab while working in oyster beds last week. This crab is the fourth that has been found in Samish Bay this year, the first three detections occurring in early January. At about 75mm (~3″) across the back shell, this crab was relatively large for a female, but had a thin, pliable shell, indicating she had recently molted. Growers noticed the crab while processing an oyster pallet, removed it from the tide flat and reported the capture to Washington Department of Fish and Wildlife. Crab Team researchers retrieved the crab for biological sampling, including taking tissue for DNA analysis that will contribute to our understanding of how green crab might be moving into and around the Salish Sea.

The capture of this green crab continues a pattern from this and recent years of small numbers of individuals found scattered across the northern Salish Sea shorelines of Washington:

This pattern of detections–few in number, but spread out over space and time–is consistent with what we have been hearing from Canadian colleagues with Fisheries and Oceans, who have launched additional early detection efforts along inland shorelines of British Columbia similar to Crab Team’s. (So far this season, the only other green crabs detected along Washington’s inland shorelines have been on the northern Olympic Peninsula: two individuals in Sequim Bay, and 50 crabs captured by US Fish and Wildlife Service removal trapping at Dungeness Spit).

As we learn more about how green crab are moving into and around inland waters, we can hone management efforts to target high risk times and places, but, we will also need to keep up a broad search. We hope that these findings signal that green crab arrivals are infrequent, with a small number of larvae getting washed in irregularly. That situation would afford us the best chance to prevent or reduce the potential economic and ecological damage green crab could cause if they were to become established. However, we also need to be on the lookout for larger, as yet undetected, populations closer to home, which could be allowing green crab to be come more securely established in this region.

Ongoing surveillance by multiple groups, including citizen science volunteers, managers, scientists, and shellfish growers is at the core of a successful effort to manage European green crab in this region. For information on how to identify and report invasive European green crab, check out our blog post.