This is the fourth and final in a series of posts on a Crab Team project to develop environmental DNA (eDNA) for use in early detection and management of European green crab. Links to the previous posts are found in the text below.

Environmental DNA (eDNA) has recently gained attention as a potential early detection and monitoring tool for green crab, thanks in part to work done by Abby Keller as part of a WSG Crab Team project to refine methods and develop tools for management. Previous posts in this series have highlighted both the promise of the technology and the challenges of integrating it as a practical tool into management and decision making.

Yet, even as this project was building eDNA as a management tool, the collaborative team at UW encountered a real-life test case that put the theory into practice. In 2020, while collecting water samples to create a mathematical model that would help compare results from both trapping and eDNA surveys across Washington shorelines, Keller (then a master’s student at UW School of Marine and Environmental Affairs) got quite a surprise when she made two positive detections for green crab on Vashon Island. Though these two sites, Raab’s Lagoon, and Point Heyer (see map below), have been regularly visited since 2016 as part of the Crab Team’s early detection monitoring network, green crabs had not been detected there prior to these samples. In fact, the team had purposely selected these sites to include in the model precisely because there was such a long and robust record of no detections in more than 200 traps total. Moreover, these sites were well beyond what was considered the “edge” of the known invasion – the nearest detections having been extremely sparse (fewer than five crabs total over three prior years) and a good distance away (nearly 40 miles).

This scenario was very similar to that of Asian carps in the Great Lakes; in both cases eDNA indicated presence of an invasive species that could not be found via other traditional detection methods. For green crab, the eDNA assay Keller used is about as sensitive as trapping – one is nearly as likely to find green crab with a similar amount of search effort for either technique. But the two types of sampling rely on different types of evidence, which raises the question of what to do with results that appear inconsistent at first glance. With the Vashon findings, there were three possible explanations for why eDNA and trapping data might conflict in this way:

A Process of Elimination

The first possibility, sample contamination, is one that is taken very seriously by eDNA practitioners. Abby’s protocols used multiple negative controls throughout the lab process, to check that samples weren’t becoming contaminated throughout the stages of preparation and analysis. This was even factored into the mathematical model that enabled us to estimate the rate at which false positives might occur, which was very low. Another factor to consider is that we might expect errant false positives to occur inconsistently across samples. But on Vashon, two sites had positive detections, though the lab work was done on different days. For all of these reasons, contamination, and false positives offer an unlikely explanation, though admittedly, not one that can ever be entirely ruled out. 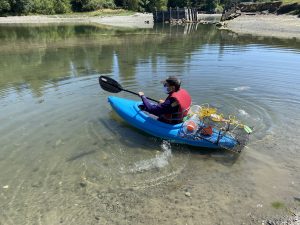 The next step in sleuthing out the Vashon detections was to conduct a broader and deeper search for adult green crabs, to determine if any had been eluding the relatively small number of traps set as part of monthly monitoring for Crab Team early detection protocols. In July of 2021, WSG and UW project collaborators teamed up with WDFW staff to conduct a large-scale assessment trapping, including both sites at which eDNA sampling yielded positive detections the previous year (Raab’s Lagoon, and KVI), as well as other possible sites nearby that might be suitable for green crabs.

Raab’s Lagoon is a small pool created by a former trestle that encloses an inlet, and the protection of the site potentially affording any green crabs arriving a refuge from larger predators. In 2020, eDNA sampling had yielded positive green crab detections in three of five water bottle samples collected. If this DNA were to have come from adults crabs, the mathematical model would have estimated a fairly high density of green crabs in the site – yet monitoring traps still failed to capture any. During this follow up detection, the team set 20 traps, just about as many as could fit into this small space, and collected an additional 12 water bottles for more eDNA sampling.

The site at KVI consists of a sandy channel on Point Heyer. Channels like these are home to lots of small native shore crabs, and are also very suitable habitat for green crabs. In the original round of eDNA sampling in 2020, KVI had a single positive out of the five samples collected. Similar to Raab’s, the assessment team set 20 traps total, and collected 10 bottles of water for further eDNA. 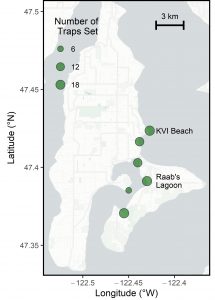 A map of all six sites trapped as part of the 2021 Vashon/Maury Island assessment. The green bubbles indicate trapping sites and are scaled in size by the number of traps set at each of them. KVI and Raab’s Lagoon are labeled as the two core Crab Team monitoring sites that have been sampled as part of the early detection network since 2016. (Click to enlarge)

Aside from these two core sites, the group set a total of more than 50 traps, and collected 20 eDNA water bottle samples across four additional sites (see map to the left). Despite the large scope of effort, no green crab were detected in either sampling technique, increasing the confidence that green crabs were not present at that time in even small numbers across Vashon.

Putting the Puzzle Pieces Together

Finding no support for either of the first two possibilities, the most plausible explanation for the positive green crab detections by eDNA in 2020 seems to be that the eDNA sampling might have been detecting green crabs as larvae, but that those larvae did not stick around or survive well enough to be detectible at those sites the following year. Because of their behavior, crab larvae tend to move through water bodies on tides and currents in a loosely collected “cloud.” So, it might make sense to have had two detections of larvae on Vashon, but not at other nearby sites that were also sampled in 2020. Moreover, even if larvae washed into either suitable site, it’s not uncommon for the majority of crab larvae to fail to survive, no matter the species, particularly if they were present in low numbers to begin with. To be clear, we do not have rock solid proof that this was the case, but piecing together several lines of evidence suggests this as a likely scenario.

Though entirely unanticipated as part of the eDNA research project, the Vashon example provided an excellent case study of how to best use eDNA for green crab management. Because the two types of sampling collect different types of information, they are best used complementarily, rather than in isolation. It’s not a question of which is better – eDNA or trapping, the question is what can we learn from both? eDNA sampling might work best when trapping is not logistically feasible, but any positive eDNA detection needs to be followed up with expanded trapping in order to better understand the information coming from the eDNA survey. Conversely, trapping alone might also miss part of the picture because Crab Team monthly monitoring does not have a protocol to tell us if green crab larvae are present in the water (sampling directly for green crab larvae, which are extremely small and similar in appearance to native crab larvae, requires a great deal of time and expertise). Because larvae could represent an imminent threat to a site, knowing that larvae are arriving would be useful information to prioritize a site for continued early detection surveillance. Trapping and eDNA work best when used in combination, based on the needs of the sites and the context.

WSG will continue to work with WDFW and other partners to develop best practices and sampling programs that draw on the strengths of these tools – with green crab numbers continuing to rise, we’re going to need every tool we can get to help control the spread and protect shoreline resources.

Justine Jadallah was a senior in the UW Program on the Environment capstone program and guest co-authors this blog post series as part of her project to investigate barriers to the adoption of eDNA as a management tool.