Trapping throughout 2021 indicates that the European green crab invasion has grown across Washington’s coastal estuaries, namely Willapa Bay, Grays Harbor, and Makah Bay. This year’s collaborative efforts by many partners to remove crabs and track the invasion also confirmed that green crabs are more abundant and widespread in these locations than they are along inland shorelines, and will likely continue to increase. 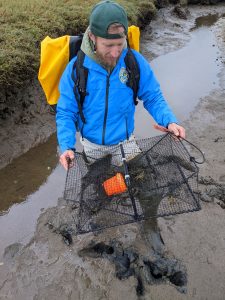 2021 marked the second year of intensive and systematic trapping for European green crab on Washington’s outer coast and rounded out a yearlong population assessment coordinated by the Washington Department of Fish and Wildlife (WDFW) and WSG. This was the first comprehensive coastal evaluation in two decades. Over the last two years, the work has been shared among a strong, collaborative network of partners including Tribal departments, federal and state agencies, shellfish growers, and other shoreline stewards. This year, though the Covid-19 pandemic continued to throw curve balls at just about every turn, the partners who make up the complex trapping landscape on the coast were able to successfully get into the mud for a full field season, and trap from April through November. In total, the collective work amounted to more than 5,000 trap sets in 2021, nearly a four-fold increase compared to 2020.

The network of trappers used several complementary strategies for removing green crabs. While all of these approaches aim to capture crabs efficiently, the overarching goal is also to make sure we have the information necessary to control the green crab invasion effectively (Figure 1).

Each of these styles is necessary for understanding and controlling the green crab invasion. The information gained from assessments and sentinel sites is fed directly back into prioritizing sites for removal, and ultimately is needed to track whether removal trapping controls crab populations.

No Shortage of Green Crabs

More groups in the mud meant more traps in the water – and more green crabs removed than ever before. Trapping efforts coordinated by WDFW and WSG (Figure 2) resulted in about 3,000 green crabs removed, while additional removal efforts led by partners listed above resulted in an additional 13,000+ crabs pulled from coastal estuaries (detailed summary table). The density of green crabs varied quite a bit, and at some of the hotspots, this meant that upwards of five crabs, on average, were coming up in each individual trap. For comparison, across most inland sites, trappers have to set 100 traps to capture just three crabs, on average. On the other end of the spectrum, on the US east coast, green crabs are so abundant in some places that they’re weighed, not counted, to measure the catch. While totals and capture rates offer estimates of the relative green crab population size at a given location, it is important to keep in mind that the real size of the populations on the Washington coast is certainly larger than the number of crabs trapped and removed, because we know we don’t capture every single crab each time traps are set. 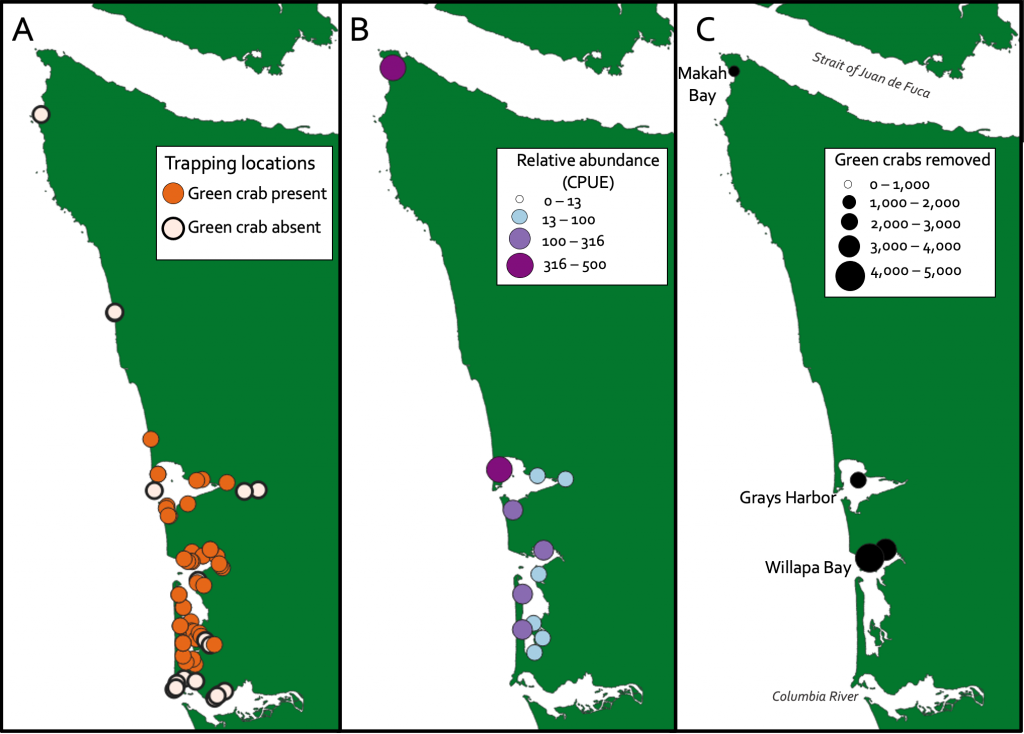 Figure 2. Maps of capture results from all 2021 efforts. A) Presence/absence of green crabs at WDFW and WSG green crab trapping locations in 2021. B) Relative abundance of green crab scaled by catch-per-unit effort (CPUE) standardized as the number of crabs per 100 trap sets. C) Total number of green crabs captured via removal efforts. See summary table for more detail. Click to enlarge.

The current distribution of green crabs is strongly linked to availability of good habitat. Over the course of the assessment, green crabs were found at almost all sites explored in Willapa Bay and Grays Harbor, but were absent, or very rare, from open coastal sites and at sites far upstream on the rivers that flow into the estuaries (Figure 2). Assessment efforts prioritized areas along the Washington coast that had not been previously trapped, and/or in areas where green crab presence was unknown or suspected to be low, in an effort to help define the margins of their distribution. No green crabs were found at five of the areas trapped: the Ozette River, the Queets estuary, the Quillayute River, the Chehalis River and the Columbia River. The habitat at these river mouths is less favored by green crabs due to factors such as a strong freshwater influence, a greater exposure to the open coastline and high wave energy, or the combination of both factors. A notable exception, however, was a small green crab found on the cobble beach near Ozette by eagle-eyed WSG Coastal Hazards Specialist, Ian Miller, in August. Lucky crabs might survive in these less favorable habitats if the larval supply from other areas is strong enough. By contrast, protected estuaries like Makah Bay, Grays Harbor, and Willapa Bay provide more suitable green crab habitat, and are where we find the greatest densities of green crab. Hotspot areas, or areas of high green crab abundance, continue to be found closest to the mouths of Grays Harbor and Willapa Bay (e.g. Ocean Shores, Tokeland, Nahcotta) (Figure 2).

Increasing abundance and a wide range of crab sizes suggest that green crabs may not disappear on their own as they have in previous decades. Trapping observations from all sites where we have two years of data show an increase in the abundance of green crabs in 2021, ranging from 67% and up to 800%, depending on the site (Figure 3). Additionally, crabs captured, some by hand, ranged from 10mm (young-of-the-year) to 92mm (at least 3 or 4 year old adults). On the small side, finding juvenile crabs means that larvae continue to arrive to sustain or even further grow the populations. The prevalence of large older crabs tells us that green crabs can survive and even thrive well over their full life span, which is about six years. In some areas, green crabs might be establishing locally sustaining populations within the larger estuaries, which could cause densities to increase further in the next few years. 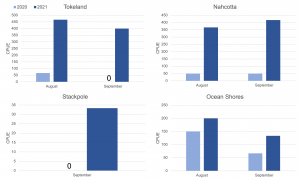 Figure 3. Inter-annual comparisons of average green crab capture rates at four sentinel sites. At all sites where comparison was possible, green crab capture rates increased up to 8-fold from 2020 to 2021. Note: The scale for CPUE is different on each figure. The Tokeland graph shows only the CPUE of Fukui captures due to minnow trap alterations in August and September 2021. Click to enlarge.

The information gained from the yearlong assessment together with removal trapping numbers points to a critical time in green crab intervention on the coast. While these numbers are large, comparing the state of Washington’s coastal invasion with other locations globally suggests there is still time to interrupt and control this invasive species to mitigate impacts and spread. WSG Crab Team priorities include continuing to support WDFW, the state management lead for green crab, and all of our other partners in field activities including removal, while also working to increase the local capacity for trapping and monitoring. We will continue to track and gather consistent information on green crab status and trends through sentinel sites and use this information to advise further control actions. Outreach and communication are at the heart of our work, and we are eager to continue to share the knowledge we collectively gain. 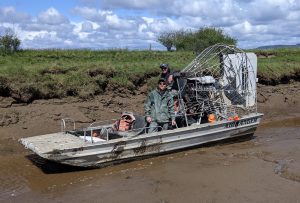 We’d like to acknowledge all of the hard work and true dedication of each of our partners on the coast. Continuing to strengthen and grow this network will be key as we move forward. Not to mention, working with these groups makes our job much more enjoyable. A heartfelt and special thanks to: Brady’s Oysters, Goose Point Oysters, Grays Harbor National Wildlife Refuge, Makah Fisheries Department, Pacific County Vegetation Management, Pacific Shellfish, Quinault Indian Nation, Shoalwater Bay Indian Tribe, Twin Harbors Waterkeeper Alliance, Washington Department of Fish and Wildlife, Willapa Bay National Wildlife Refuge, Willapa-Grays Harbor Oyster Growers’ Association, Taylor Shellfish.