The turning of the leaves signals a winding-down of green crab trapping activities. Just as it feels right to us to hunker down and stay warm, cooler water temperatures also cause green crab to become less catchable in the fall and winter. Crab Team monitors have pulled and stored their last traps, and, as of today, all of the data are into Crab Team HQ here in Seattle. While we have provided snapshots and updates throughout the season, we thought it was a good time to summarize what was found this year along Washington’s inland shorelines.

Overall, European green crab remained very rare, but were found at a few new locations. Below, we’ll outline what we know about each of the sites where green crab have been found. To compare across sites and over time, we use the measure of “catch per unit of effort” (CPUE). When searching for green crab, or anything really, chances of finding one depends not only on how many there are, but also on how much time is spent looking. We total the number of trap-days to estimate how much effort went into looking for green crab at a given site. A trap-day is one trap set overnight, even if it doesn’t quite spend 24 hours in the water, because the nighttime soak tends to be the most important time to catch green crab. Because the number of green crab remains so small, we track CPUE as the average number of European green crab expected, on average, in100 trap days. The CPUE for all sites is reported in the figure below. 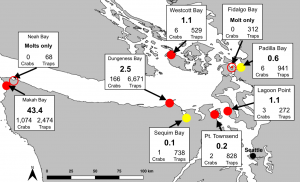 Map of all sites along Washington’s inland shorelines where European green crab have been confirmed since 2016. Red sites show where crabs or molts were found in 2017, while yellow sites indicate that green crab were only found there in prior years. Filled circles show sites with live crabs captured, and unfilled circles show sites where only molts have been detected. Large bold number is the average number of crabs captured per 100 trap-days at that site, and the number of individual crabs and trap-days for each site is also listed. (click to enlarge)

This year, US Fish & Wildlife Service, with the help of dozens of volunteers, continued an impressively robust removal trapping effort. In addition to managing three Crab Team early detection sites once per month, they set roughly 40 – 50 additional traps for several nights each week all throughout the summer. Total this year, 69 green crab were captured as a result of an effort of 2,677 trap-days. Wow! The 2018 CPUE at Dungeness Spit, 2.6 crabs per 100 trap-days, remains almost exactly the same as 2017 (96 crabs in 3,762 traps or 2.5). While we would have preferred to see CPUE decline from last year, the fact that it has not increased is actually a strong testament to the importance of the trapping that is happening there. There are two additional hopeful signs. First, there were almost no very young green crab captured this year. Second, green crab were not observed to be spreading across Dungeness Spit itself.

That said, there was a detection at a new site in Dungeness Bay this year, Dungeness Landing. This site has been a part of the Crab Team early detection network since 2016, but this is the first time a green crab was captured here. Two intensive trapping efforts have been conducted at Dungeness Landing, one last year after green crab were found at Dungeness Spit, and the other this year, in response to the capture by Crab Team volunteers during monthly early detection monitoring. Thankfully no other green crab have been captured at this site, bringing the CPUE to 0.4 crab per 100 traps (that is, you have to set more than 200 traps to catch a single green crab).  Overall for Dungeness Bay, combining Dungeness Landing with Dungeness Spit, the CPUE for the past three years is 2.5 green crab per 100 trap-days.

Trapping in Sequim Bay is conducted not only at two Crab Team monitoring sites, but also by Neil Harrington with the Jamestown S’Klallam Natural Resources Department. The combined effort of 738 trap-days over the past two years has yielded only the single European green crab captured at Jimmycomelately Creek in August 2017, for a total CPUE of 0.1 crabs per 100 trap-days.

This was the site of the very first confirmed capture of green crab on Washington’s inland shorelines in 2016, but follow up trapping and ongoing Crab Team monitoring in 2017 did not find any more green crab. This year, four additional green crab were captured at the site, two during a one-off trapping workshop in June, one during volunteer monitoring, and one during a WDFW follow-up trapping effort. Total in 2018, four green crab were found in 263 trap-days of effort (CPUE of 1.5 crabs per 100 trap days), and combined with prior efforts at the site, the overall CPUE remains low: 1.1 crabs per 100 trap-days. 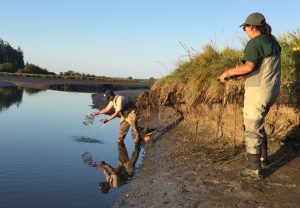 Following the extensive search for green crab (and capture of four) in Padilla Bay in 2016, five Crab Team early detection sites were launched throughout the bay in 2017. Evidence of two individual green crab (one clearly eaten by an otter or raccoon) were found during monthly monitoring at two separate sites in 2017. This year, monthly monitoring continued at all five sites, and two large assessment trapping efforts were conducted by staff at the Padilla Bay National Estuarine Research Reserve (in the south end of the bay) and by Washington Department of Fish and Wildlife (in the north end), but no further evidence of green crab was detected in 2018. The total effort for 2018 was 389 trap-days, bringing the total catch to date up to six crabs in 941 trap-days (0.6 crabs per 100 trap-days)

Washington Department of Natural Resources Americorps volunteers who had been trained as Crab Team monitors found a molted green crab shell in Fidalgo Bay while conducting other monitoring in the Fidalgo Bay Aquatic Reserve in June. Crab Team has maintained three early detection sites in Fidalgo Bay since last year, none of which have captured any green crab. WDFW also conducted follow up trapping to this molt sighting, and did not capture any crabs in 78 trap-days of effort.

Crab Team conducted another expanded assessment trapping this June to bolster efforts to keep an eye on Lagoon Point where Crab Team volunteers captured a green crab during monthly monitoring in September 2017, and a second during a follow up trapping effort the following month. While no green crab were captured this year during monthly monitoring, we found one male green crab during the assessment trapping. The total of three green crab captured in the small lagoon, across 272 trap-days results in a CPUE of 1.1 crabs per 100 trap-days.

This year the newest detection site for live European green crab was in the region of Port Townsend. A single crab was captured during the final monthly trapping effort by Crab Team volunteers at Kala Lagoon in September. WDFW followed up with several additional trapping efforts in the region, and did find one additional green crab in Scow Bay. The total of these two crabs, captured in 828 trap-days of effort, leads to a CPUE of 0.2 crabs per 100 trap-days in the region.

The Makah Fisheries Department led an extensive removal trapping effort, in response to finding European green crab in the Wa’atch and Tsoo-Yess river estuaries last year. Though technically, this is outside of the Crab Team early detection network, as Makah Bay is not within the Salish Sea, this is an important effort to track, because it is a relatively new population and could potentially be a source of larvae coming into the Salish Sea. Managers and volunteers with the Makah also keep an eye on Neah Bay, which is in the Salish Sea. Though it is not likely to be a good spot for a Crab Team early detection site, it is good news that trapping by the Makah has not captured green crab in Neah Bay, though several molts have been found in that area (potentially washing in from other locations). To date in Makah Bay, however, 1,074 green crab have been captured in 2,474 traps (CPUE: 43.4 crabs per 100 trap days) – much higher than any site along Washington’s inland shores. The Makah Bay population is likely receiving many more larvae than sites within the Salish Sea, and might have been established earlier, which could explain why the population has gotten larger there.

Zooming out to the “big picture”

We wanted to share the details with you, but it also helps to try to make some sense of all this. These are some of the take home messages from this year’s findings:

All of these sites will receive ongoing monitoring in 2019; with the exception of Neah Bay, those in the Salish Sea will remain in the Crab Team network. Though the primary function of Crab Team monitoring is early detection, i.e. finding the first arrival of green crab, continued consistent monitoring is necessary to track the changes over time, both in green crab and in the habitat they could potentially impact.

As you might tell from the length and detail in this blog post, it takes an immense amount of work to learn all of this, and it wouldn’t be possible without the volunteers and partners who participate. So, if you ever see a Crab Team monitor out in the mud, be sure to say, “Thanks!” 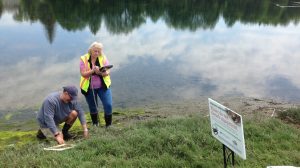